On 27 March 1917, a cold wind blew, and showers of sleet rained down on the small village of Mont St. Eloi, located in northern France.  On this bleak day, a young Canadian soldier, twenty-one year-old Arthur Lemay, stood before a field general court martial, the army’s highest wartime court. He had been there before. (p.1)

So begins the Introduction to Teresa Iacobelli’s fascinating study, Death or Deliverance: Canadian Courts Martial in the Great War. Lemay’s case is only one of the many Iacobelli draws on to challenge the conventional understanding that the Great War courts martial discipline was harsh and unrelenting.

Lemay’s record of poor performance and desertion earned him a suspended death sentence. Now, he was being charged with two more counts of desertion. Nothing good was said about Lemay at his trial, and all of his commanding officers recommended that he face a firing squad at dawn. Nevertheless, when Commander-in-Chief  Sir Douglas Haig  deliberated on whether to sentence him to death or deliverance, he chose (for undeclared reasons) to sentence Lemay to  five years of incarceration. In less than six months, Lemay was back with his 22nd Battalion comrades. Iacobelli cites Lemay’s case as an example of how deliverance, instead of death, was more often the ultimate sentence. 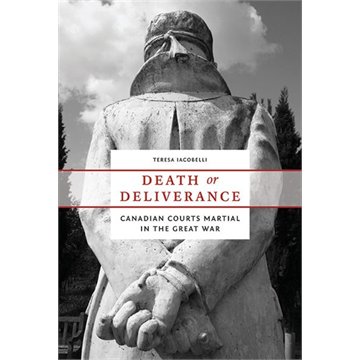 Iacobelli’s book is one in the series, Studies in Canadian Military History, a joint venture of UBC Press and the Canadian War Museum, aimed at presenting “the best of contemporary scholarship to provide new insights into all aspects of Canadian Military History from earliest times to recent events.” (frontispiece). A lofty goal but Iacobelli’s unique view of Great War courts martial is fitting within this series.

Given its anecdotal writing style and accessible language, the book will appeal to a broad audience of academics and non-academics alike. Where appropriate, Iacobelli engages with the works of Great War scholars for their contributions to her topic. She challenges some misconceptions about the power of the courts martial to influence discipline and morale during the Great War.

The book is divided into six chapters that deal with the Great War courts martial from various points of view. Chapter One discusses courts martial execution sentences during the Great War, and the arguments concerning their value for military discipline and their influence on morale. Chapter Two is a general overview of military law relevant to courts martial, while Chapter Three focuses mainly on the crimes of desertion and cowardice, and the factors that motivated men to abandon their role as soldiers. The processes and procedures of the court martial itself are detailed in Chapter Four. Chapter Five examines inconsistencies in the letters of recommendation that ultimately went to the Commander-in-Chief to confirm or commute the results of the courts martial trials. The final chapter traces the history of the “Shot at Dawn” campaign, a grass roots movement aimed at achieving political pardons for Great War soldiers who were traditionally “shot at dawn”.

Relying on the case files of over two hundred soldiers and drawing on the secondary sources of popular media, Iacobelli addresses her primary concern of “why some death sentences were commuted while others were confirmed during the First World War.”(p.84 ) She insists that in finding the answer, it is even more important to review the files from the nearly two hundred commuted sentences and in particular, the files from the twenty-five executions in the Canadian Expeditionary Force. Iacobelli stresses the need to focus on the complexities and particularities of military law and civilian law as they were between 1914-1918, and not as we would understand them with contemporary law.

Iacobelli found that certain courts martial records were often missing, incomplete, or appeared in illegible longhand. She discovered that legal training for proponents on both sides of the hurriedly-assembled tribunals were sub-par, leading to inconsistent decisions and overturned sentences. Prisoner’s friends and junior officers felt intimidated in their roles as witnesses. Additionally, the accused were frequently away at war when they were called as witnesses. The accused themselves were often victims of shell shock or were of questionable mental ability. Iacobelli also uncovered instances of legal and military discrimination based on class and ethnicity. One example is the story of Private John Sewell, the only Aboriginal soldier in Iacobelli’s review. Sewell’s commander described Aboriginal soldiers as “people [who] are of a low mentality and liable to commit any act under the stress of great excitement.”(Footnote 93 p. 103)

By setting aside the fog of emotional literature and films about the Great War courts martial, Iacobelli convinces readers that military justice was far more humane and compassionate than often popularized. Overall, Death or Deliverance deserves plaudits for shining a penetrating light on a dark subject. Educators at the secondary or post-secondary level would do well to consider it as a project resource or for supplementary reading for both its style and subject matter.

Now retired, M. Wayne Cunningham is a former teacher and administrator in postsecondary education in three Provinces and a former Executive Director of the Saskatchewan Arts Board. He lives and writes his reviews in Kamloops BC.