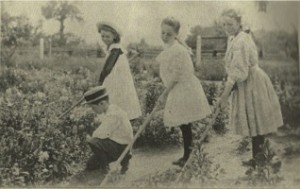 Undated Photo, Richmond, ON. From the Spring 1905 issue of the Queen’s Quarterly. (Reproduced with permission). 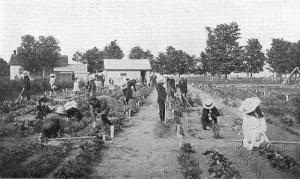 A school garden in Bowesville, Ontario established by the Mcdonald-Robertson movement, from the Spring 1905 issue of the Queen’s Quarterly. (Reproduced with permission).

A sample of Canadian headlines about school gardens from the past few months: A two-year school garden project in Vancouver will contribute to fresher produce in the cafeteria and food literacy skills. Students at an ethnically diverse school in Windsor, Ontario will use a new community garden as a “living classroom” for discussions on healthy eating and plant science. Students went to work planting at a school in Pickering, Ontario that has been named ‘the greenest school on earth’.

School gardens have made a recent comeback, tapping into environmental consciousness and community-mindedness. But their roots belong to a much earlier period, when they appeared to offer a grab bag of pedagogical benefits.

In Erasmus Schwab’s treatise The school garden: Being a practical contribution to the subject of education (1879), Schwab wrote that a well-planned school garden will cultivate “reflective and active natures, from whom sullenness and indolence stand aloof… because they will have learned thoroughly by their little labours in the school garden to do in an orderly and capable manner whatever they have to do”[1]. A follower of child-centred learning in the spirit of Friedrich Froebel, the inventor of the kindergarten, Schwab here seemed to say that children could be encouraged to pursue a “reflective nature” in the school garden; but the manner in which they did so ought to be “orderly and capable.”

School gardens were also thought to be useful in planting the virtues of thrift, money management, and respect for property, a Brandon teacher observed:

They have money to spend on seeds and they gain experience in wise expenditure. They learn lessons in the law of supply and demand and the division of labor. Each pupil finds out that it is necessary for him to do his little bit in order that the whole may be a success. A respect for another’s property is developed in gardening which is very valuable.” [2]

But beyond these virtues, school gardens were also linked to the broader educational good that was experiential learning. This was learning by doing and discovery, led by the pupil. It was to be child-centred, at least in its ideal form. In the 19th century educational reformers promoted the idea that tactile engagement with objects of daily life quickened the eye and the hand while offering a more direct way for children to uncover their own skills and interests and to discover how to learn. The learning stimulated by the outdoor work would at any rate be superior to learning methods that relied heavily on rote and recitation.

The other primary pedagogical benefit was nature study, which prepared the ground for the modern elementary science curriculum. Teachers already had opportunities to introduce nature study first-hand through activities such as wilderness trips or tree-planting on Arbor Day. The idea of school gardening took this one step further. Established on a plot of land adjacent or close to the school, the school garden gave children the opportunity to observe plants from seeding to harvest.

School gardening flourished in cities and towns in Europe after the mid-19th century and didn’t take off in North America until the 1890s and the early years of the 20th century. In Canada the movement (1900-1913) led by Sir William Macdonald, benefactor of McGill University, and James Robertson, future chair of the federal Royal Commission on Industrial Training and Technical Education (1910) was pivotal to school gardening [3]. Neil Sutherland has written that the Macdonald-Robertson movement “gave practical demonstrations of such elements of the ‘new’ education as manual training, school gardening, nature study, domestic science, consolidated schools, and better methods of training teachers”[4]. In 1903-1904, Robertson sent a group of eight teachers with experience in rural schools on study tours and they returned home to establish model school gardens, five each in Ontario, Quebec, New Brunswick, Nova Scotia, and P.E.I.

In the United States, where the growing seasons were longer, school gardening was even more extensive. The University of Chicago as well as Cornell, Columbia and Clark universities were early leaders in developing nature study curriculums. Robertson sent the Canadian teachers on their study tour, in 1903-1904 (along with the Ontario Agricultural College) [5]. In America, school gardening also got a head start from the early efforts of educational reformers such as Wilbur Jackman, author of Nature Study for the Common Schools (1891). John Dewey was also particularly influential; he wrote that object lessons presented for the sake of processing information were no “substitute for engagement with the plants and animals of the farm and garden through actually living among them and caring for them.” [6]

School gardening gained supporters during this time because it was versatile; a variety of learning objectives could be fashioned around it. For a great many school subjects — crop science, floriculture, entomology, measurement, drawing — some of what you needed to teach that subject could be found in school gardens.

Undated Photo, Richmond, ON. From the Spring 1905 issue of the Queen’s Quarterly. (Reproduced with permission).

But agriculture was the primary focus in school gardening. The era in which the Ontario government established (in 1907) the first Canadian system of grants to schools and teachers for conducting school gardening was characterized by unprecedented concern and activism around agricultural training and instruction. It was in this period that Ontario appointed of Samuel McCready of the Ontario Agricultural College as director of elementary agricultural education. “School gardening gradually became an important aspect of rural education in Canada,” Neil Sutherland has written. [7]

There was a sense that agriculture needed to be taught early in order to encourage an interest in farming in a new generation. The rural economy was a national concern. An important thrust of school gardens was therefore about instilling a love of agriculture. Without school gardens, the The Canadian Horticulturist mused, the “child’s mind” is dulled “to the beauties about him and creates the longing for the ‘real’ life of the city. Under the direction of the school teacher, new interest in the wonders of the country life can be aroused through the medium of the school garden”[8].

The comment offers an idealistic view of rural life that was characteristic for the period. Carl Berger provides a telling quotation from Governor-General Grey, an admirer of William Macdonald, in The Sense of Power: Studies in the Ideas of Canadian Imperialism, 1867-1914: “The most pressing problem of the time … is how to reestablish the people in a profitable and beautiful life upon the land.”

Feminist scholars have also shown that a large share of the task of nurturing this love of land in children often fell to women. The labour of the women’s institutes and related women’s clubs needed to run activities such as school gardens, agricultural fairs and boys and girls clubs following the federal government’s passage of the Agricultural Instruction Act in 1913 – which delivered $10 million in funding for rural education – was usually assumed, Linda M. Ambrose has written. [9]

If agriculture offered a practical focus for the interest around school gardens in the early 20th century, school gardens nonetheless suffered all the practical difficulties related to maintaining them. Sutherland writes, “Some teachers did only barely enough work to collect their grants.”[10] He added that “provincial departments were slow in adapting courses to local conditions,” while “frequent changes of teachers broke the continuity of the work.” Sally Gregory Kohlstedt, describing why the U.S. school gardening movement declined after the First World War, said “the increasingly vocational programs had limited appeal to urban pupils and seemed too much like work at home to those in the country.” [11]

In Canada the hope that basic horticultural instruction could effectively translate into fostering a more positive view of rural life now appeared highly unrealistic. The 1921 Census indicated that a majority of Canadian residents now lived in urban centres. It was becoming harder to see a clear connection between public school gardening and preserving agricultural ways of life.

There was also the emerging consensus that where agricultural knowledge was the goal in practical education, post-secondary institutions offering specialized courses of study in agriculture were in any case better able to make a lasting impact. As Paul Axelrod has written, the impressive list of agricultural universities and colleges that emerged in this period included the Nova Scotia College of Agriculture, Macdonald College, l’Institut agricole d’Oka, and Collège Sainte-Anne-de-la-Pocatière. “Specialized and sophisticated,” Axelrod wrote, “the research and training programs at the higher educational level achieved more concrete and enduring results than did agricultural courses in the elementary and secondary schools, conceived, as they often were, in the spirit of nostalgia and romanticism.” [12]

Today, school gardens are back, and needed more than ever. But emphasizing their “nation building” and rural-making aspects is no longer the habit. School gardening is now more likely to be used to teach environmental awareness and issues related to healthy eating, food waste and food aid. The lenses held up to these issues are local and global. But the new school gardens also have their basic roots in the primary educational values of nature study and experiential learning that have stood the test of time. The pioneers of school gardening would be proud.

Historically, the strength of school gardens has been in ideas and values we attached to them. The labour that goes into maintaining them has frequently been underestimated. But our enthusiasms for them are perennial.

Conrad McCallum is completing a Master’s degree in Education at the University of Ottawa.

6 thoughts on “Planting the Seeds of Citizenship”