By Beth A. Robertson and Dorotea Gucciardo 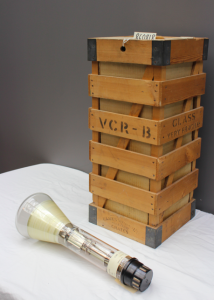 What do a glass memory tube, an electric range, a botanical painting, a player piano and two different aircrafts have in common? This first Active History exhibit dedicated to Science, Technology and Gender will provide a few answers to that question that may surprise you.

This introductory post marks the launch of a new section of the ActiveHistory.ca website entitled “Exhibits”. The purpose of the new section is to extend the partnerships between ActiveHistory.ca and other forms of “active history” primarily through collaborating with museums and archives across the country. Each online exhibit, powered through Omeka, will be organized around a theme. The exhibits will showcase a select number of objects, documents, and images from a single collection that you may or may not have heard of. Academics, public historians as well as museum professionals and archivists will be asked to place each object in context as it relates to the overarching theme.

Situating an object within its historical context can be a formidable task, especially in the absence of printed materials, which can lend insight into the object’s uses or socially constructed values. Without context, the object becomes a “thing” — something indefinable. So how do we go beyond the “thingness”[1] of something to identify and analyze the object? For that, we can turn to authors like E. McClung Fleming or Jules Prown, who define material culture — that is, the objects created by a particular society — and suggest methodologies for identifying an object and determining its social meanings.[2] The most important task is to accept the artifact as an expression of culture, and to engage with it using all of our senses to unravel the values, assumptions, beliefs, either conscious or unconscious, encoded in it by the society that created it.

To that end, the contributors of this first theme of science, technology and gender, will explore artifacts with the specific goal of determining how those objects can be expressions of gender — either as being gendered themselves or telling us something about the expectations of those who used them. The objects being studied are all located within the impressive collection of the Canadian Science and Technology Museum (CSTM). And for this much thanks must be offered to Fiona Smith Hale, Gordon Perrault, William Knight, Pat Hilborn and Phillip Craig, all of whom made this exhibit possible.

It was in fact while writing a post for CSTM’s Innovation Canada 150 project that the first inspiration for such an exhibit was sprung. When viewing the various objects featured within the Museum’s digitized collection, two objects that will make an appearance in this exhibit first came to our attention—one of a series of paintings by Canadian botanist Faith Fyles, as well as a Williams cathode ray memory tube. As you will discover in this exhibit, both objects offer insight into not only the contributions of certain women, but how technology itself is understood, spoken of and remembered.

Other objects this exhibit will feature include an electric range, a player piano, as well as two different aircrafts: the Lockheed 10A Electra and the Hawker Hurricane. All these objects can help tell the story of how gender operates within constructions of science and technology. These stories can be difficult to identify, however, as they often require an alternative perspective that complicates and delves deeper into the narratives we tend to tell about objects. When speaking with Fiona Smith Hale, the Director of Knowledge and Information Management at CSTM, she reflected upon Elsie MacGill—a woman we heard of just yesterday. Smith Hale lamented the lack of materials the museum had of a woman whose life and career had contributed so much to the field of aviation.

There was, however, the Hawker Hurricane. As Crystal Sissons has already alluded to during the “Technoscience in Canada” theme week and Blair Stein will continue to discuss in this exhibit, it is possible to resurrect histories of women like MacGill through looking at an object from a different perspective. Such a perspective considers, much as the theme week posts have discussed, the politics of history. And indeed, gender politics have a significant role in the narratives we tell about science and technology. We hope this exhibit can help illuminate just that.

So now let us invite you to explore some of those alternative histories and politics through ActiveHistory.ca’s very first exhibit, Science, Technology and Gender.

3 thoughts on “Science, Technology and Gender in Canada: An ActiveHistory.ca Exhibit”