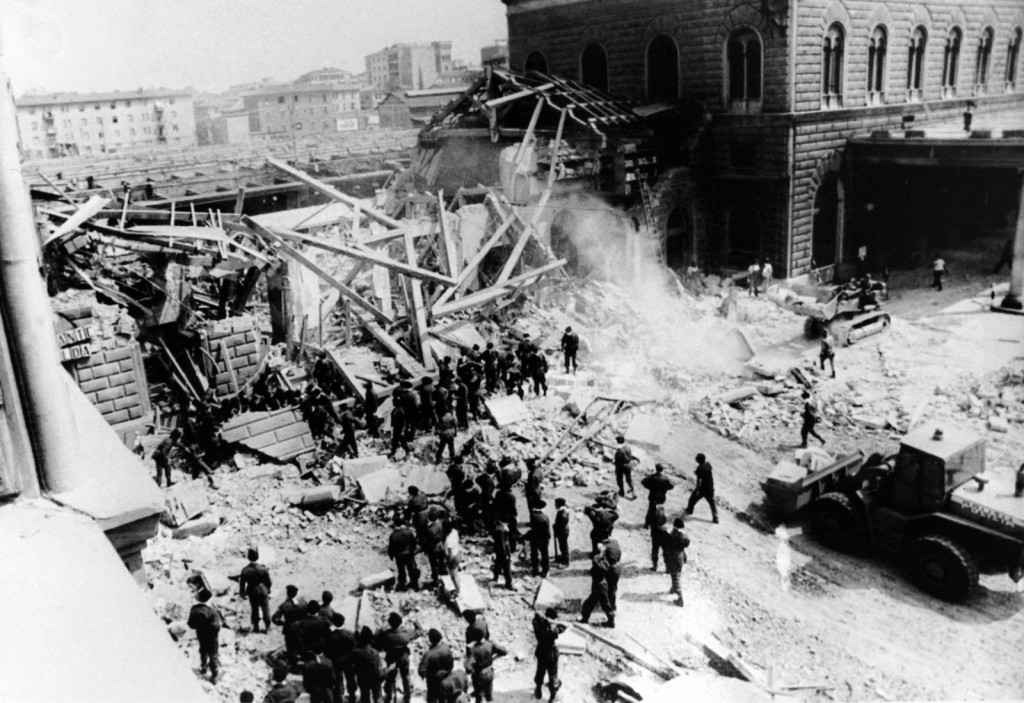 About a month after the November 13 shootings, I was lining up, along with hundreds of carefree visitors, in front of the Osiris exhibit at Paris’s Arab World Institute. The sun was out, children were playing on the steps of the building and, aside from the occasional military squad patrolling the area, it was hard to believe that this city had recently been hit by a series of brutal attacks. As I was waiting in the slowly advancing line, I began to wonder what I would do if a gang of masked gunmen were to show up. We were (according to Daesh) nothing but horrible miscreants on their way to admire Ancient Egyptian idols. Why was I suddenly feeling vulnerable? After all, the risk had always been there and, although the media had only recently begun to popularize the concept of “soft targets,” the use of violence on civilians in public places is nothing new. However, the media’s frequent recourse to World War Two as a benchmark in terms of violence has contributed to obscuring the various acts of terrorism that occurred during the Cold War era, the 1990s, and the 2000s.

Among the many approaches to the 2015 Paris attacks, few avoided the trap of Western exceptionalism – here I use “Western” for the sake of convenience, as that term does not describe a clearly defined reality. While the generally Eurocentric reactions to the January and November shootings have been pointed out on many occasions, the chronological nearsightedness of most of the media and of the powers-that-be has been largely ignored. The appearance of the French tricolour on the CN Tower, the Statue of Liberty, and other monuments in the wake of the shootings did not just reflect a geographical double standard, but also implied that some sort of world-historical event had occurred. Although the high death toll (130 victims) seemed to point to a return to a level of violence unseen since the Second World War, and although the terrorists’ recourse to suicide bombers signaled a change in the Jihadists’ tactics on the European continent, it would be premature to see that particular massacre as an epoch-making event. 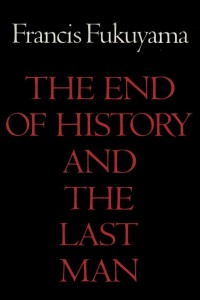 Unfortunately, these chronocentric responses were not as publicized as the (justified) accusations of Eurocentrism. Chronocentrism consists of the assumption that world-changing historical developments are happening in one’s own lifetime. This particular stance is by no means a new phenomenon, as it has lain at the basis of millenarian movements since time immemorial. More recently, the main thesis in Francis Fukuyama’s The End of History and the Last Man (1992), which posits that the collapse of the Eastern Bloc and the “triumph” of capitalism marked the end of historical development, can also be considered chronocentric. In brief, chronocentrism can be defined as the chronological counterpart to ethnocentrism. Such an approach to history tends to exaggerate the significance of changes and to ignore continuities. In the present context, the large majority of the media take a chronocentric approach to the news, as they seem to consider that the importance of history is positively related to the catastrophic scope of an event.[1]

While the importance of the 1939-45 years in shaping our world is not in question here, it would be incredibly short-sighted to see the last seventy years as a period of peace in the Western world. Granted, the countless books and movies on the Cold War and, more particularly, the Vietnam War and the Cuban Missile Crisis, demonstrate a certain interest in key events of the post-1945 era. But those works were the products of their times and did not challenge the Whiggish perspective that the “free,” liberal-democratic societies had on world history.[2] To many, then, the fall of the Berlin Wall seemed to signal the end of a bipolar world and the advent of an era of peace and freedom under the auspices of a quasi-universal global market.[3] The delusion that the West (and, to some, the world at large) was entering a period of peace persisted well into the 1990s. Of course, the media regularly reported on the Yugoslav Wars and the Rwandan Civil War and Genocide, but the feeling prevailed that all was not so bad “in this best of all possible worlds.”[4] It was only in the wake of the 9/11 attacks that “history” suddenly seemed to be knocking at our doors after supposedly treading water for a decade or so. 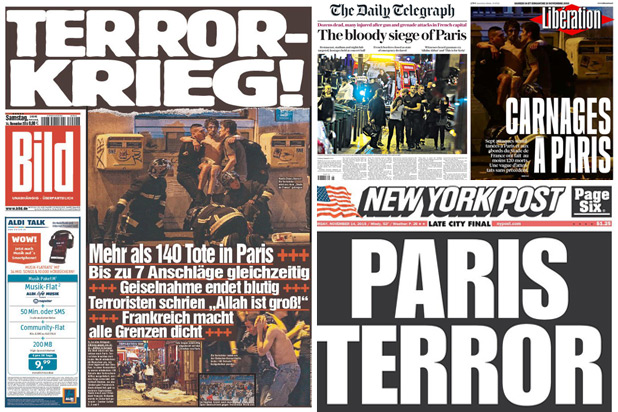 Headlines after the Paris Attacks. Thewrap.com

The media’s response to the November 13 attacks was similar, in some ways, to that of the 9/11 ones. Nonetheless, the development and expansion of the social networks since then also contributed to further sensationalizing the event.[5] But what made the January and November attacks so shocking was not the relatively high death toll, but the fact that it occurred on French soil and that it seemed to replicate the many (but less mediatized) atrocities taking place in the Middle East or Africa. Therefore, it would not be adventurous to state that even milder, less spectacular versions of the 9/11 or November 13 2015 attacks might have caused similar responses. The irruption of a foreign, seemingly distant conflict in Europe certainly constitutes an important development in the multisided conflict that has been taking place in the Middle East and North Africa. However, 2015 is probably not the epoch-making year that the Western media have made it out to be.

The French historian Pascal Ory has recently argued that “there is no contradiction between a given event and structure [in general]: despite its dramatic nature, the event is, in a way, an explosion of structure, condensed in space and time.”[6] This stance opposes Fernand Braudel’s classic criticism of event-centred history. To Braudel, history reveals itself in long-term changes, what he calls the “longue durée,” as opposed to historical events, which make up the “glittering layer on the surface of history.”[7] If he was still alive, then, he would probably see the November 13 shootings as a striking but nonetheless superficial spasm distracting contemporary observers from less telegenic, long-term changes. Thus, while Ory is certainly right in seeing a connection between short- and long-term changes, he does not take into account the spectacular dimension of the attack. Just because an event elicits a strong emotional response it does not make it a world-historical moment.

Although changes in technology have undoubtedly facilitated the organisation of spectacular attacks and the spreading, via TV networks and the internet, of images and videos of those “performances,” acts of terrorism are nothing new. While the term terrorism is contentious (it could easily be substituted for “resister” or “freedom fighter,” depending on one’s perspective), the option of creating a state of terror among one’s enemies’ populations is certainly inherent to the concept of warfare, and therefore as old as humankind. But the term can also refer to a means of rule, as was the case during the French Revolution’s “Reign of Terror” era (1793-94) or, conversely, to sporadic interventions from marginal organizations or individuals, like the anarchists who engaged in violent “direct action” in the 1890s. Far from being confined to one ideology or to one particular context, “terrorism” is essentially a method that has been used in a broad variety of contexts by many kinds of people and groupings. 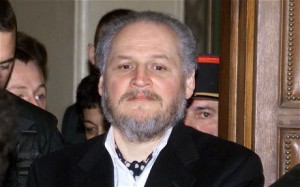 The attacks that occurred between 9/11 and 2015 could also be seen as the prolongation of a long series of violent acts that occurred during the Cold War and the 1990s. Indeed, the ideological and methodological rationales that lay at the core of each of these three eras (1945-89, 1989-2001, 2001-present) should not be completely partitioned from one another. By taking a close look at the history of terrorism, one notices that the perpetrators’ agendas varied greatly depending on the region, and that the ideas that motivated the attacks were eclectic. For example, the German Red Army Fraction (1970-88), which can be considered a New Left/Marxist-Leninist-inspired organization, was also ideologically porous, as it enjoyed close links with the PLO (Palestine Liberation Organization), whose secularist stance has never been immune to religious influences. The now-imprisoned international assassin Ilich Ramírez Sánchez (better known as Carlos “the Jackal”) not only had many contacts in the KGB and the STASI (among other agencies), but also collaborated with Saddam Hussein’s Iraq in the 1980s. As for the Irish Republican Army, it received weapon shipments from Muammar Gaddafi’s Libya in the 1970s and probably benefited from substantial financial support from Iran in the 1980s.[8] In that regard, then, 1970s/80s terrorism reflects the realities of the Cold War as an era of multipolar alliances and intricate ad hoc global networks that were as complex as the ones at work in our day and age. 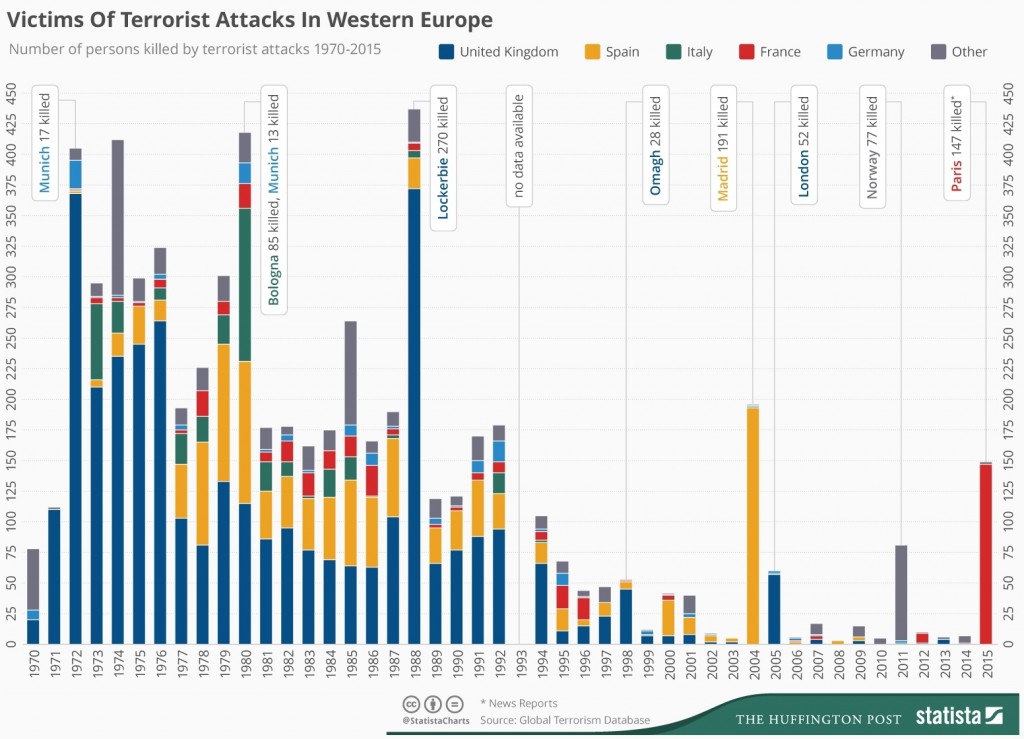 Though particularly violent, then, the acts of terror that have hit Europe since 2001 (most notably in Madrid, London, and Paris) cannot be seen as signs of a new era. Numerous similar acts occurred during the Cold War and the 1990s. The Years of Lead, which plagued Italy from the late 1970s to the early 1980s, plunged the country into a deep crisis. The violence came from both radical left organizations, like the Red Brigades (notable for the kidnapping and execution of the then-prime minister Aldo Moro in 1978), and far right groups. It was one of the latter, the Armed Revolutionary Nuclei, that perpetrated the Bologna train station bombing in 1980 (85 dead). The supposedly “quiet” 1990s were also riddled with deadly attacks, like the 1995 Oklahoma City bombing, the 1994 Air France hostage crisis (Algiers-Marseille), and the 1995 Saint-Michel station bombing in Paris – the latter two were claimed by the Armed Islamic Group of Algeria.

In brief, terrorist violence was never absent from Europe and North America in the 1945-2001 period. We do live in “ugly” times, but times have never ceased to be ugly. To define historical eras on the basis of terrorist attacks thus seems chronocentric and ethnocentric. Of course, periodizing is a necessary evil in order for the historian to rationalize his or her approach to the past. However, resorting to an imaginary, necessarily unscientific, scale of violence to delineate time periods is inevitably superficial.

[1] Konrad Yakabuski, “Paris attacks changed everything, but not for Obama,” The Globe and Mail, November 23, 2015.

[2] Whig history is a school of historiography that sees the development of the liberal idea of progress as central to the “flow” of history. It rests on the postulate that history follows a course that will inevitably result in the culmination of freedom and the triumph of democracy.