In the recent federal election campaign, the Liberal Party proposed banning ‘military-style’ semi-automatic rifles such as the AR-15.[1] Prime Minister Justin Trudeau, now leading a minority government, will need to decide whether to fulfill this promise in the face of strong opposition from the Conservative Party and gun-owner advocacy groups.

Limiting the availability of such firearms is not new idea. Police and some politicians first began raising concerns with the sale of semi-automatic rifles in the 1970s. However, legislators have been reluctant to ban such guns despite their use in several infamous shootings, including the 1989 shooting at Montreal’s École Polytechnique (which occurred 30 years ago Friday), the murder of three RCMP in Moncton in 2014, and the 2017 Quebec mosque shooting. As a result, while some such guns are now prohibited, many others are classified as ‘non-restricted’ or ‘restricted’ firearms.

The reaction to a 1984 police murder involving a semi-automatic rifle highlights the typical Canadian legislative response to violence committed with such guns: piecemeal reform designed to avoid angering firearm owners.

The Murder of Constable David Dunmore

On 18 September 1984, 18-year-old Gary White of Etobicoke armed himself with a Hechler-Koch HK-91 .308 semi-automatic rifle with the intent of killing his ex-girlfriend, Kimberly Baur. White took the rifle from the large gun collection of his uncle and guardian, Neil Russell. The HK-91 was a restricted firearm, but Russell had failed to register the weapon as required by law.[2]

White was a troubled young man. He had joined the Royal Regiment of Canada in 1983 but had been dismissed for poor attendance. He failed out of school and worked part-time at his uncle’s gas station. Friends and family suggested White had developed a fascination with guns and the military. “He had a fantasy about guns,” said one neighbour.[3]

For several months, White had made threatening phone calls to his ex-girlfriend’s family, sometimes several times a day, and often in the middle of the night. He said he would kill the Baur family and hack up their bodies. Kimberly’s mother described the effect of these phone calls: “I was terrified for my life and my children’s lives. He told me, very explicitly, over and over, that he was going to kill me.”[4] The family eventually laid charges against White. This angered him. He believed a criminal conviction would prevent him from joining the United States army.[5]

On the day of the shooting, White dressed himself in military fatigues, army boots, and a headband. He commandeered a car at gunpoint; police responded by searching for an armed man driving the stolen car. Constables David Dunmore and Bradley Bested stopped the vehicle. White immediately opened fire. Dunmore suffered gunshot wounds to the neck and chest.  “Brad, I’m hit,” he cried out.[6] 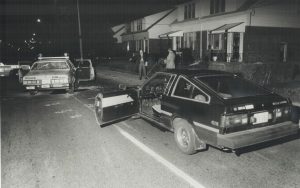 White fled, though he soon encountered another police car with two constables. This led to a second exchange of gunfire. Constable Virgil Lepinski had his ankle shattered by two bullets and had to have two toes amputated. Constable Borden Zazinsky was shot in his right arm. White suffered a fatal wound to the chest.

In the gunfights, White fired approximately forty rounds, emptying two twenty-round magazines. The injured constables received medical treatment, but Dunmore died at St. Joseph’s Health Centre. Dunmore was an eleven-year veteran of the police. He and his wife, Sarah, had three children: David (aged 11), Michael (9) and Kathleen (6). At the funeral in Milton, over 3,500 police and other first responders attended.[7] 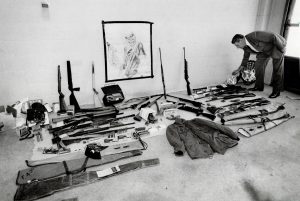 The Public and Government Response

Some commentators blamed the incident on violent Hollywood movies, much like video games receive blame for violent male behaviour today. White’s favourite film was Sylvester Stallone’s 1982 Rambo film First Blood. At Dunmore’s funeral Reverend Jack Birch suggested that such films sowed the seeds of violence “under the guise of art,” and that violent films were a “disgusting revulsion to the dignity of our humanity.”[8] Others, including Toronto Police Chief Jack Marks, called for the return of the death penalty. 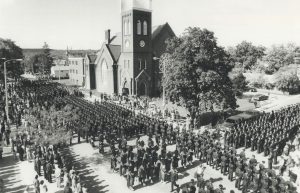 Some police suggested Canada’s firearm laws needed to be strengthened or drew attention to the problem of smuggled guns from the United States.[9] “My personal opinion is ‘Who in Metro needs a gun?,” said Metro Police Staff Superintendent Donald Banks.[10] The president of the Ontario Association of Chiefs of Police, Robert McEwan, believed that it was “time for the whole picture to be studied, including the manufacture, sale and possession of these weapons.”[11] The Globe and Mail agreed: “What truly needs reassessment is Canada’s firearms control legislation.” It speculated that an inquest might “disclose just how much weak gun law was responsible,”[12] and argued that opposition from gun owners had prevented Prime Minister Pierre Trudeau’s government from implementing tougher firearm laws in the 1970s. 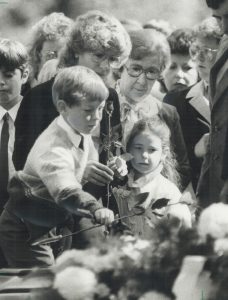 A coroner’s inquest heard from several witnesses urging policy changes. Dunmore’s widow recommended that police be armed with shotguns to give them more firepower.[13] The desire to more heavily arm police is familiar. After the 2014 murder of three RCMP officers in Moncton, the Mounties decided to make semi-automatic rifles available to all its members.

The coroner’s jury rejected the claim that violent films caused the shooting. Instead, it made several recommendations to avoid future incidents: more police training, an amnesty period to turn in firearms, and a review of police communications. The jury also urged a Criminal Code amendment that would prohibit all ‘assault-style’ rifles.[14]

In 1986, the Canadian Association of Chiefs of Police, which had long expressed concern about such weapons, called on the government to act. The organization passed a resolution warning that there was a surplus of automatic and semi-automatic weapons “primarily designed for purposes of warfare now finding their way into the Canadian market.” It called on the federal and provincial governments to address the availability of these guns.

Two years later, the police chiefs expressed concern with the “alarming rate with which military weapons are being imported into Canada,” especially guns that had originally been manufactured as automatic guns, but which had been modified to fire in a semi-automatic mode. The Association thus called for an immediate ban of the importation and possession of such weapons.

Prime Minister Brian Mulroney’s government dithered, however. Less than two months before the murder of fourteen women at the Montreal Massacre, Minister of Justice Doug Lewis told the House of Commons that the government had “absolutely no intention of banning the importation of semi-automatic weapons, none whatsoever,” but would consider banning the importation of automatic weapons converted to semi-automatics.

Action only came following the Montreal Massacre. A student organized petition, demanding a ban on the civilian possession of “military or paramilitary weapons,”[15] garnered over 500,000 signatures. The Progressive Conservatives, led by Minister of Justice Kim Campbell, passed legislation that prohibited large-capacity magazines, and issued a series of Orders-in-Council that prohibited or restricted some semi-automatic rifles. Later, the government of Prime Minister Jean Chrétien tightened gun controls further.

The HK-91 became a prohibited firearm following the Montreal Massacre. Some of these guns remained in Canada, however, and in 2005 James Roszko used the same model of rifle to murder four RCMP on his farm in Myerthorpe, Alberta. In recent years, gun makers and retailers have introduced and marketed many new models of semi-automatic rifles, usually marketing them as ‘modern sporting rifles’.  Many of these have been classified as non-restricted firearms.

The murder of David Dunmore and its aftermath suggests much that is familiar to followers of today’s gun-control debate, including the potency of such firearms if misused, the danger of mixing troubled young men and guns, the desire to blame popular culture for violent male behaviour, and the role of firearms in violence against women.

It also demonstrates the reluctance of many politicians to impose gun control measures because of fear of angering firearm owners. Legislators have proven reluctant to prohibit most semi-automatic rifles, instead preferring to say they will target ‘military-style’ or ‘assault-style’ weapons. This approach is more politically palatable. It is, however, problematic to implement since it is difficult to define this category of weapon and it creates the false sense that some semi-automatics guns are safer than others based on their appearance.[16]

This has long been an issue. In a 1990 study, prepared by the Research Branch of the Library of Parliament, William Bartlett noted the lack of functional difference between military-style guns and other semi-automatics weapons. This meant that “even weapons designed and manufactured as semi-automatic hunting and recreational shooting rifles” can “be used to create carnage.”[17]  Jurisdictions like New Zealand, Britain, and Australia have addressed this fact by banning almost all semi-automatic rifles.

Polling suggests that the Liberal Party’s proposed ban of ‘military-style’ weapons is popular. If it does act, the government will need to decide how broad the ban will be.

The Liberal Party’s election platform did not say how it would define this category of firearm. Will it only include firearms that are modified civilian versions of guns originally designed for military use, or will it ban most semi-automatic guns, a step recently taken by New Zealand?

The government has hinted that the former is intended, meaning that many semi-automatic rifles will remain on the market. The Liberal government will thus probably, like previous governments, take another important, yet still piecemeal, step.

[1]‘Semi-automatic’ rifles are guns that can be fired each time the trigger is pulled. Such guns are distinguishable from manual action firearms that require shooters to use a mechanism to reload guns after each discharge, and from fully automatic firearms that continue to fire so long as the trigger is depressed.

[6]Drew Fagan and Margaret Polanyi, “Army-clad killer of policeman was dismissed from the militia,” Globe and Mail, 19 September 1984.

[15]Heidi Rathjen and Charles Montpetit, December 6: From the Montreal Massacre to Gun Control: The Inside Story (Toronto: McClelland and Stewart, 1999), 33.

[16]Groups representing gun owners, for example, sometimes say that only fully automatic rifles should be included in this category and that such guns are already prohibited.