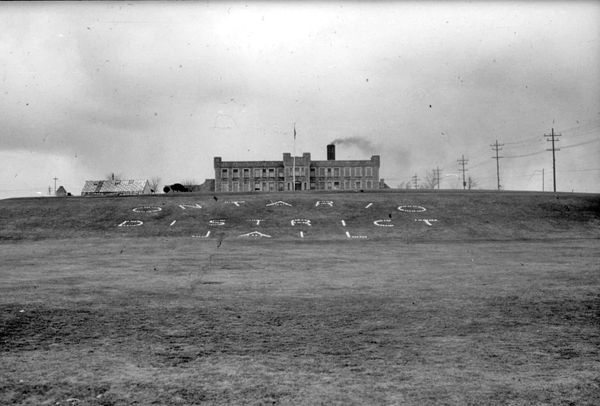 This article is reposted, in slightly edited form and with permission, from the fourth issue of Syndemic Magazine: “The Colours of Covid-19.” Syndemic Magazine is a project of the L.R. Wilson Institute for Canadian History at McMaster University.

In Thunder Bay, Ontario, the city’s prison battled a Covid-19 outbreak through winter 2021. Overpopulated and faced with growing cases, the prison went into lockdown. By the outbreak’s end, 70 people had contracted the disease inside the jail. The pandemic reaffirmed many of the carceral system’s larger social and racial biases. The outbreak, however, was the inevitable result of larger institutional failures. Poor infrastructure and poor living conditions combined to create a nightmare situation for a mostly Indigenous inmate population. These failures, like in many other social institutions, were apparent long before the pandemic; Covid-19 simply intensified them with brutal force.

Indeed, the global pandemic undressed society’s far-encompassing disparities. Many racialized groups and other vulnerable communities — including the unhoused and the incarcerated — endured the pandemic’s harshest realities. Covid-19 exposed the carceral system’s larger social and health problems, as jails and prisons across the world faced viral outbreaks. The outbreak at Thunder Bay’s jail made this connection apparent.

Thunder Bay is an isolated community in northwestern Ontario and falls within the traditional lands of the Anishinabek Nation and the traditional territory of Fort William First Nation, signatory to the Robinson-Superior Treaty of 1850. Settlers colonized the region at the mouth of the Kaministiquia River for its importance to the fur trade. Fort William remained open until 1821. The future cities of Port Arthur and Fort William (amalgamated into Thunder Bay in 1970) emerged in the late-nineteenth century, cementing British-Canadian hegemony in the region. Thunder Bay is a city tied to its colonial past and a city that still exudes the darkest realities of settler-indigenous relations in Canada.

Census information reveals that Thunder Bay Metropolitan area has one of the highest proportions per capita of Indigenous people in Canada (12.7% of the population). Yet, Indigenous people have often felt as outsiders in Thunder Bay. Tanya Talaga describes Thunder Bay as a city of two faces: “The Port Arthur side is the white face and the Fort William side is the red face.” Separated by the ‘Kam’ River, Thunder Bay and Fort William First Nation have a fractured relationship built on a history of colonial violence and racism. Talaga’s book Seven Fallen Feathers tells the story of the seven Indigenous students who died while attending school in Thunder Bay between 2000 and 2011 and of the prevalent issues of being Indigenous in an isolated northern town. As Talaga explains, “to understand the stories of the seven lost students… the seven fallen feathers,” one must understand Thunder Bay’s colonial history as one built on division, distaste, and disregard for cultural awareness and understanding.

More concerning are the demographics surrounding the city’s prison population. A review of Ontario’s correctional facilities found in 2017 that “although Indigenous people accounted for 2% of Ontario’s population, they represented 13% of those in provincial custody.” In Northern Ontario, these numbers are more staggering. In the Kenora area, it’s been reported that Indigenous people have at times accounted for 90% of all inmates. In Thunder Bay, CBC reported in 2020 that 39% of incarcerated people identified as Indigenous, though others suggests that these figures could at times be closer to 75%. There are also the intersectional issues of race and gender. Olga Marques and Lisa Monchalin’s study of Indigenous women in the prison system argues that women are further compressed by “the intersecting axes of precarity, vulnerability, victimization, and trauma,” as shown by historic instances of displacement of Indigenous women from their children, forced sterilization, and the number of missing or murdered Indigenous women in Canada. Indigenous women make up almost half of all incarcerated women in Canada despite accounting for only 4.3% of its population.

Several reports and inquests in recent years have examined the severity of these institutional problems. The Broken Trust Report, written in the wake of mounting criticisms over police practices, explains that “when considering the relationship between Thunder Bay Police Service and Indigenous communities, it is important to understand the legacy of police involvement in colonial and assimilationist policies and practices.” External investigators have called for police to reopen investigations on 14 death cases of Indigenous people, including the seven youth who died while attending school in Thunder Bay. Critics of the Thunder Bay Police Service have called for it to be dismantled and for police services to be re-examined. Thunder Bay’s police institutions remain tied to their colonial past, one where police maintain influence and agency over Indigenous peoples’ everyday lives.

Policing and the carceral state are directly connected to that history of colonialism. They are institutions created to maintain a specific social order — functions that protect and promote Canada’s liberal-colonial hegemony. As Lakehead University professor Jessica Jurgutis explains, “policing was founded on the premise that Indigenous peoples needed to be removed from the land and the false beliefs that Indigenous peoples are both less human and more-threatening than white people.” Historian Seth Adema adds that prisons fit “squarely within a network of colonial institutions that perpetuated Indigenous incarceration” — a modern extension of the residential school system. The prison system developed at the same time the federal government began establishing its indigenous policies. Like residential schools, prisons reaffirmed the same “colonial ethos” and “assimilatory nature” that attempted to destroy indigenous culture. Although residential schools have since closed in Canada, the prison system continues its agency over Indigenous lives “playing the same role as the residential school once did.” Thunder Bay District Jail, like others, are part of Canada’s colonial history.

Thunder Bay’s near-century-old jail was deteriorating long-before Covid-19. Ontario’s Ombudsman Paul Dubé described the Thunder Bay District Jail as “the most disturbing thing I’ve seen and the most appalling conditions I’ve observed… It’s heart-wrenching to see the conditions in which those inmates are living.” MPP for Thunder Bay—Atikokan Judith Monteith-Farrell described the Jail as “dangerously outdated.” Sol Mamakwa, MPP for Kiiwetinoong, describes the situation in the Kenora and Thunder Bay jails as inhumane. On his trip to the Thunder Bay jail, Mamakwa saw mattress on the floors of cramped cells, describing it like “a factory that produces broken Indigenous people.”

Thunder Bay District Jail’s official capacity is 124 inmates. The jail’s overcrowding crisis at times has had four inmates in a cell built for two. Thunder Bay Jail is old, over-crowded, and dungy – ridden with mould and asbestos. The city erected the “collegiate gothic” building in 1926; its architecture intended “to impress upon the criminal element the power of the institution and its ability to ensure the safety of the local citizenry.” Its architecture and design also makes it a more dangerous place for both officers and the incarcerated. The pandemic amplified these concerns.

The Covid-19 outbreak occurred quite rapidly at the Thunder Bay jail. Two inmates first tested positive at the jail between 5-6 January 2021. Staff placed them both in isolation, and the jail went into lockdown. Yet, the number of positive cases increased to 14 in less than a week. The outbreak grew, and 20 inmates and 5 guards tested positive by 20 January. The jail was, at the time, housing 135 inmates, a number which staff deemed too high. Despite efforts to manage the situation, Covid rates increased. The jail had 48 total cases by 25 January. The Solicitor General reported a total of 70 cases by the end of January.

The outbreak did not stay locked up. Thunder Bay saw an uptick in Covid-19 cases in January and February 2021. Other vulnerable community services, like the Shelter House, had outbreaks during the same period. These outbreaks eventually spread to the larger community. Thunder Bay District Health Unit’s 7-day incidence rate more than tripled through January, from 24 to 94 per 100,000 people. Covid-19 shows that jails and prisons are not isolated environments; incarcerated people are still part of the larger community and underscore larger social and health issues within them. Carceral facilities need to ensure and maintain health and cleanliness standards to protect everyone — communities, workers, and inmates — equally.

Calls for the jail to close date back as far as 1976, but it has become increasingly necessary in the last decade. Thunder Bay’s isolation and its predominantly indigenous prison population has led many to question whether such delays reflect the institutional racism in our political and judicial systems. Would such derelict conditions be allowed at jails in the Greater Toronto Area? The Ontario government has recently decided to push forward the construction of a new 345 multi-purpose correctional facility in Thunder Bay. The new project will cost $1.2 billion.

There remains much work to be done in both reforming and decolonizing the Canadian carceral system. While Covid has been particularly brutal to those in the prison system, these unfortunate circumstances have no less brought greater attention to the larger systemic and institutional issues behind Canadian prison walls.

Brandon Cordeiro is a historian and member of the editorial team of Syndemic Magazine. He is a settler living in Thunder Bay on the traditional lands of the Anishinabek Nation.