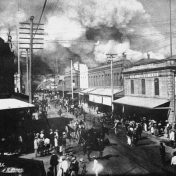 Yukari Takai More than a century before the global outbreak of Covid-19, another deadly disease struck Honolulu, one that ignited the tragic unfolding of many stories about public health, urban fires and social inequalities, particularly racism. The bubonic plague, also known as the Black Death, hit Honolulu’s crowded and throbbing Chinatown in December 1899 when it took the life of… Read more »

Laura Ishiguro and Laura Madokoro In recent weeks, we have seen white supremacist rallies in cities across North America, from Charlottesville to Quebec City. On each occasion, anti-fascist and anti-racist activists, along with other community members, have confronted these rallies with large and diverse counter-demonstrations, largely shutting them down, overwhelming them, or rendering them caricatures of their original plans.  On… Read more »

By David Webster The internet deleted its first virtual country this month. It wasn’t that bad: Timor-Leste is now a real country, and doesn’t need its original internet domain name any longer. But the .tp top-level country domain name (ccTLD, in the lingo) has a story to tell as it ends its 18-year history. In 1997, the former Portuguese colony… Read more »

By Cristina Pietropaolo Passage to Promise Land: Voices of Chinese Immigrant Women to Canada is a thoroughly researched and eloquent documentation of the experiences of twenty-eight women of different ages (the oldest in their nineties and the youngest in their thirties) who emigrated from the southern coastal region of China to Canada between 1950 and 1990. Vivienne Poy, an historian,… Read more »

By David Webster In Canada, some say, you can only get a new history museum by renaming an existing museum. In China, the 2010-1015 Five-Year Plan envisions opening 3,500 new museums. And this isn’t a matter of grandiose targets never to be achieved: by the end of last year, 4,000 museums had opened. The Chinese state’s efforts to control the… Read more »

Mahatma Gandhi’s name is synonymous with peace and saintliness almost everywhere on the planet. Yet in parts of postcolonial South Asia, Gandhi’s life, politics, ideologies, and legacy have been the subject of considerable controversy and even violent denigration. How, then, should we remember Gandhi? Misogynist tyrant or freethinking radical? Self-absorbed kingmaker or farsighted statesman? Economic genius or utopian fantasist? By… Read more »

By Lauren Wheeler I recently took a trip to a Calgary restaurant where the most iconic of Chinese-Canadian dishes originated.  The restaurant is on Centre Street at 27th Avenue North and you would likely miss it unless you looked for the sign reading “Silver Inn.” Two colleagues from the Royal Alberta Museum (RAM) also  made the trip from Edmonton to… Read more »

By Pam Sugiman This is the third in a series of posts originally presented as part of a roundtable entitled “What’s the Use of History? Citizenship and History in Canada’s Past and Present,” held in Toronto on October 16th 2012.  The event was organized by the People’s Citizenship Guide Project. Personal memory and history As a contributor to this series… Read more »

By Benjamin Bryce Over the past century, the ‘mosaic’ and the ‘melting pot’ have emerged in North America as concepts to explain Canada and the United States’ relationship with immigration and cultural pluralism. The term mosaic traces its origins to John Murray Gibbon’s 1938 book, Canadian Mosaic, while the melting pot emerged in public consciousness as the result of Israel… Read more »

By Benjamin Bryce Canadians frequently draw comparisons to the United States, but they rarely extend their gaze further south. Nevertheless, in a number of areas, Canadian history has been connected to that of several other countries in the Americas. For example, the Canadian government’s policies toward aboriginal people find many analogies in other parts of the Western Hemisphere. In areas… Read more »