By Brittany Luby, Graduate Student at the University of British Columbia/First Nations House of Learning

I first met Dorothy Grant in Vancouver’s Pan Pacific Hotel.  I was so nervous – hardly 20 years of age and working the front desk for a high profile business event.  I watched Dorothy – then unknown – walk towards me, her coat tails swaying side-to-side with each step.  She seemed to dance across the corridor, her coat an able partner.  When she reached the desk, I smiled and greeted the raven embroidered onto her collar.

I learned that Dorothy Grant gained international recognition for Feastwear, a line sported by public figures like Robin Williams, David Suzuki, and Lieutenant Governor Iona Campanella.  My excitement grew when I discovered that Dorothy Grant returned to her roots – to Haida myth and histories – to design garments now.  Grant excited my inner fashionista – the Chanel-obsessed historian-in-training who ordered both clothing and library books online.

Three years later, I would meet Dorothy Grant again – this time, in her studio on West 6th Avenue in Vancouver, BC.  I wanted to know more about her.  I wanted to know how (and why) Dorothy, of Haida and Tlingit ancestry, united fashion and Indigenous history.  And, I had Active History to offer.  Over a cup of green tea, here’s what I learned about the intersections of history and haute couture:

LUBY: What inspired you to use fashion – to use garments as a medium – for sharing Haida art, Haida histories?

GRANT: Haida art has a look of almost universality to it.  It has to do with the “Innovation” idea – that art should not be stagnant, but progressive, no matter what the culture. As for Haida people, we have always looked for new mediums to convey Haida Art.  This way, we keep ownership of it and no one else can say they did that first.  Think of fashion as a bridge between cultures. It’s a way for people of nations –

GRANT: Yes – of nations to understand the art in fashion, rather than a totem pole.  It becomes more communal.

LUBY: How do you decide which stories or symbols to share?

GRANT: Sometimes my garments tell a story from really what inspires me to create something.  And, sometimes its just esthetics of a design – that I want to put Haida art onto a particular classic style.  Like art, fashion should not be stagnant, but be constantly moving to convey a contemporary culture.

LUBY: OK. Contemporary culture.  Dorothy, your work has been displayed at museums across North America from the Smithsonian to Vancouver’s Museum of Anthropology.   Do you have any fears surrounding museum displays?  For example, the conflation of current fashion with Indigenous pasts by your viewers?

GRANT: No, I don’t fear that at all!  I think to be collected by museums is a huge honour.  Most artists or designers have to die before they are recognized that way!   I think it –

GRANT: communicates that innovation that I talk about to the general public and that is good thing.

LUBY: Alright.  So, museum displays: a good thing and fantastic exposure.  But, what sort of history do you want museum visitors to walk away with?  They see your pieces and think – what? 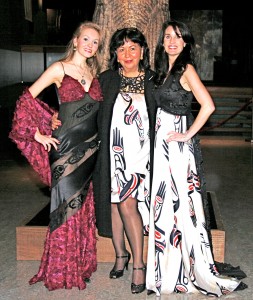 GRANT: That it’s more about progression of Haida people.  They first must see the evolution of Haida art and its people and what we have evolved from.  For instance, from about 1850 we were nearly extinct from diseases like small pox.  Our population was decimated by 90 % from contact.  And there’s so much that can be said for the period between then and now, our contemporary culture.  It’s like colonialism, social oppression, and how we have overcome that.   Haida people refuse to be victims.  Again, it’s about claiming what is rightfully ours.

“And, the history of my people is one of national interest in that we have always been progressive in politics, in art, in language, the protection of our territories (land and water rights).  The interest in Haida art is much sought after and carries a lot of weight in the Native art arena.  To see my work in museums is a lot about that progression, and evolution.   As one collector has said “You’ve come a long way, baby.”  Sweet and true.

LUBY: I love that you see museum displays as a statement of evolution.  Fashion as a piece de resistance.  Now, to a set question:  Flare and Toronto’s Globe and Mail have both claimed your garments are a site of intersection.  They are a creative space where fashion meets Haida art, myth, history.  How do you feel about this claim?  And, is this the legacy you’d like to leave?

GRANT: This is true! Yes, this is what I set out to do as part of an earlier vision from 1989, but it still carries forward today.

“Nothing ever remains the same – as for the vision, it still is the same.  However, what is changed is the Legacy of Dorothy Grant Vision.  I believe it is the impact of my work on other First Nations communities and individuals that matters.  In terms of starting something that others can try to emulate or take inspiration from to do their own thing in their own cultural esthetic.  This has been extremely – it’s impacted First Nations communities as far away as New Zealand, Maoris.  I think that is what I am inspired to do.

“When I am selling to people in shows, in art markets, there is this feeling of pride from my clients that they feel they have arrived, that they are buying something very special.  They aspire to buy for themselves or as gifts and they deliver it with pride.  This is the most gratifying for me.

“If I have helped to elevate the way a person feels about themselves in my clothing, then I have done my job well.

LUBY: Wow.  Dorothy, thank you so much for your time.  As a First Nations student, I can say that you’re a real role model for me.  A successful business woman and connected to your roots.  I hope for as much – to move forward and be true to myself and my history. Meegwetch.

And, with that, I packed away my lap top, savoured the last sip of my tea, and quickly checked the price on Dorothy’s new ribbon scarves.  I left an inspired, well-dressed historian-to-be with a story.

3 thoughts on “Integrating History and Fashion: an interview with Dorothy Grant”