How is it that we know the importance of words in shaping our perceptions, but forget to examine our naming practices beyond the naming of Indigenous peoples? 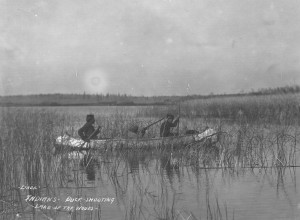 How is it that we perceive images like this as Indians hunting among or in the “wild” rice?  What exactly presents us from reading the visual as “Crop Maitenance” or “Pest Control”?

As Indigenous historians, we debate the use of “Indian” in reference to law or colonial parlance.  We know it is a misnomer, a combination of geographical error and personal folly.  We suggest “First Nations” is best because it implies sovereignty and long-term presence.  Specific Tribal names like Migmaq, Haundenosaunee, Nehilawe, and Anishinaabe, wow us because we think that they represent a people as they would represent themselves.

We write books about representation.  We have a field called “Identity Studies.”  We know what it means to be labelled and how a label, in shaping lives, becomes real.  We write to create awareness and to challenge stereotypes.

And yet, we focus on the names of peoples.  We neglect renaming the very things that sustain Indigenous populations.  I ask you, what assumption do the names for material things, tangible things carry?  I believe we need to revisit our most basic assumptions in Indigenous studies, in identity studies.  We cannot create a positive image of Indigenous populations unless we create positive images for the objects that they encounter, consume, and create.

And what, you may ask, brought me here, to my battle with names?  It is a two word answer: “wild” rice.

In daily practice (and in intellectual practice), we use these two words to discuss a crop important in my territory, Treaty #3.  A crop we call manomin. A crop we plant.  A crop we harvest.  But, “wild” rice encourages us to see this Anishinaabe crop as an incident of nature.  “Wild” rice is not the result of hard work or careful planning (packing mud balls, sinking mud balls, exterminating pests like muskrat or duck).  And so we fall back on existing negative stereotypes.  When we write, “The Anishinaabe depended on wild rice,” we are rewriting – in new language – old assumptions about living off “nature’s bounty.”  We fail to acknowledge “improvements to the landscape.”

In Wild Rice and the Ojibwa People (1988) by Thomas Vennum, we learn that French missionaries were the first to name manomin “avoine sauvage” or “avoine folle.”  They were astounded that crops in the New World resembled crops back home (avoine), especially when they were “unimproved” (sauvage).

If we analyse the common frameworks that create meaning, we can link the adjective “wild” to the “wildness” described by Gabriel Dreuilettes in 1658: “They reap, without sowing it, a kind of rye which grows wild in their meadows, and is considered quite superior to Indian corn” (Vennum 6).  By continuing to call manomin, an Anishinaabe crop, “wild” rice, we support settler assumptions of natural bounty, of the New World as Eden.  We read Indigenous peoples and their actions as blips on Canada’s resource radar.

The language of “wild” rice also erases Indigenous petitions to the Crown for compensation for lost crops.  In 1890, Chief Lindsay from Rat Portage wrote the Department of Indian Affairs to complain about a dam:

built across the Mouth of the River it is higher and has Killed all our Wild Rice [….] And again at the Treaty we were promised that on any Islands on which we had Gardens were were allowed to keep them over and above the quantity we were to have for our reserves (RG10, v. 3696, f15410).

Here, Lindsay has identified “wild” rice as a garden.  Something nurtured.  Something cared for.  Something lost.  However, linguistic assumptions carried by “wild” rice encourage historians to gloss over such primary sources – we wonder how “subsistence” activities, rather than Indigenous labour, were affected by flooding.  We focus on cultural, not economic loss.  And, we are tempted to ignore intersections between the two.

We are trained to see images like the one above as evidence of Indigenous seasonal rounds.  Indeed, “wild” rice erases the labour depicted in the image, the work behind large-scale Indigenous agricultural operations. We don’t see pest control.  We don’t see multi-purpose subsistence activities.  We assume the “wild” rice exists outside of the “hunters’” presence, not because of it.  Through language, we erase the intention behind gardens, and the work behind crop production.

And, to what effect? Our wildly inconsiderate vocabulary created a public supportive of Manitoba’s Wild Rice Act (1983), an act requiring all “wild rice” harvesters to acquire a permit, an Act passed without comprehensive negotiations with Anishinaabe (large scale and long term manomin producers).

On 21 December, 1984, Acting Grand Chief Steve Jourdain received a letter from the Minister of Natural Resources informing him that under Manitoba’s new law “a registered Indian [could] engage in the harvesting of wild rice for household purposes.”  When Jourdain objected, the Ministry of Natural Resources claimed to have “no knowledge of the harvest of wild rice to the Ojibway, and put [Grand Council Treaty #3] to strict proof thereof.”

“Wild” rice.  Why negotiate with peoples who “reap without sowing”?

Worse yet, the Specific Claims Tribunal Act prevents Anishinaabe from applying for recognition and compensation under Bill C-30 today!  As you’re reading this, someone in a government office reads Section 15 (9): a First Nation may not file with the Tribunal a claim that “is based on treaty rights related to activities on ongoing variable nature, such as harvesting rights.”

“Wild” rice. Why negotiate with peoples who “reap without sowing”?

Ironically, “wild rice” has gone gourmet.  To serve market needs, non-Native farmers have planted and harvested their own fields.  And, these non-Native corporations are able to acquire farmers’ insurance for their “wild” rice crops.  Non-Native farmers, because of their labour, have manageable risk.  “Wild” rice isn’t variable when you’re incorporated.

I’m tempted to argue that the production of large scale manomin crops requires similar effort and labour in similar territories regardless of your ethnic background or CRA status.  There is nothing wild about it.

But, as the proverb goes, “you reap what you sow.” If we refuse to think critically about our naming practices for mundane things, we will sow Bill C-30.  We will sow the Manitoba Wild Rice Act.  If, however, we sow intentionality into our vocabulary, we’ll reap recognition of Indigenous labour.  We’ll find large scale agriculture in Canada’s North, presumably made agrarian by non-Native settlers.

And so, I ask you to think about tangibles in your work.  To think beyond naming practices for peoples.  I beseech you to create a framework that rejects not only wild Indians and wilderness, but wild foods.  I ask you to acknowledge a people with purpose and intention in the material world.