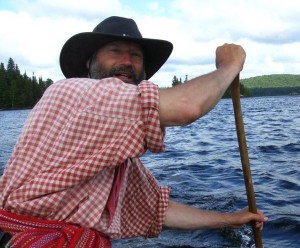 Early in my career as a French teacher in Manitoba, I took students to the Festival du Voyageur in St. Boniface, Winnipeg. There I was fascinated by the life and times, the strength, stamina and joie-de-vivre of the voyageurs. In addition, I was intrigued by the fact that the fur trade was dependent on the vagaries of fashion in Europe, the fact that our rivers and lakes line up more or less east-west, the native invention of the birch bark canoe, the willingness of young French Canadians, and later natives and Métis, to risk their lives in the trade, and the already well-established system of, and predisposition to, trade among the First Nations of North America. I was very impressed that, lacking any one of those factors, we would likely not have a Canada from coast-to-coast. Well supported by the Manitoba curriculum, les voyageurs, which focused on some of the most colourful characters in Canadian history, became my favourite teaching unit.

Upon moving to southern Ontario, I discovered that very few French teachers there knew much about les voyageurs. In 1990, a colleague asked me to bring the experience to her school. I jumped at the chance, and by the time I retired from full-time teaching in 2006, I had given more than 100 presentations at schools in and outside my own school board.

In 2007, I had the opportunity to live the life of the voyageurs. We got up, loaded the canoe and were on the water as soon as there was light enough to see we weren’t leaving anything behind. After 1500 kilometres and 61 days in birch bark canoes, from Ottawa back to Ottawa by way of Lake Ontario, Georgian Bay and the French River, paddling eight hours a day (wimpy by comparison to the 15-18 hours a day of the voyageurs), sleeping on the ground in a bedroll at night (groundsheet, two woolen blankets, oilcloth sheet overtop if the rain or the bugs were really bad), paddling, wading, lining or portaging canoes and all our period-correct equipment, cold pea soup and bannock to eat, flint and steel to make fire, I felt qualified to say I was an authentic voyageur. Among other skills, I know what to do without matches, dry wood, toilet paper or bug spray. 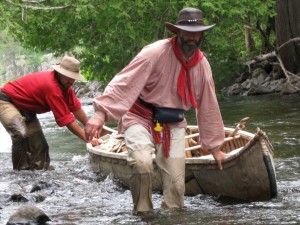 Since then, I have traveled another 3000 kilometres on the fur trade routes, two more trips in the same style and two in David Thompson Brigades (DTB), bicentennial trips that honoured the world’s greatest cartographer and an amazing human being. The DTB covered Rocky Mountain House, Alberta to Fort William, Ontario in 2008 and Invermere, British Columbia to Astoria, Oregon in 2011. The period trips were from James Bay to Fort Témsicamingue, Quebec in 2009 and from Kitcisakik, Quebec to Ottawa in 2011.

Although animals tend to avoid a group of humans, we have had some close encounters, all quite safe. Deer at the water’s edge for a morning drink. Lots of otters and herons. One encounter with a cow moose and calf was fairly close, but they were on land and we were in our canoes. Bears quickly disappeared as we approached. I was run over at night by what I’m guessing was a marten or fisher, and a raccoon left his footprint neatly centred on a soiled leather pouch. The only time animals inconvenienced us was when we stayed in a campground where people fed the raccoons. In the morning, we found our tight-lidded tin of bannock opened and as clean as a whistle. We had to stay one more night, so we suspended our bannock tin between trees. 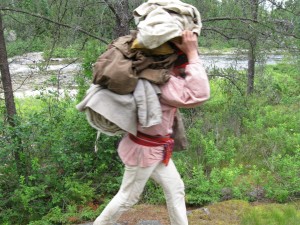 What I found the greatest challenge of voyageur life were not the long hours of paddling  through a truly resplendent north country and the grueling nature of portages when you’re trying to carry as much as possible over rough terrain. It was the mosquitoes. The voyageurs tried bear grease mixed with skunk urine, which they must have thought had some effect, but we find to be more repulsive than repellent. With no effective repellent, we were at the mercy of the bloodthirsty little beasts and many nights it was difficult to get a good sleep, in spite of our fatigue.

What surprised me the most was when, in mid-afternoon, I woke up, paddling. I could actually grab a wink or two while paddling, although, fellow voyageurs did notice a change in my stroke. Apparently it was not noticeable enough for them to wake me before I woke myself! I have learned two strategies for avoiding that situation. One is to wear a long, woolen toque at night which can be pulled down to the shoulders. I can breathe through the knitting, but mosquitoes don’t like biting through wool, although they occasionally find the tip of my rather prominent nose through the knitting. Another is to cover yourself completely with your 10’x10’ oilcloth tarp spread around you, weighted down on windy nights. Somehow enough oxygen gets through, although occasionally during the night it can be refreshing to lift the tarp briefly. But then you have to rouse a bit and take the time to hunt down a few invaders. 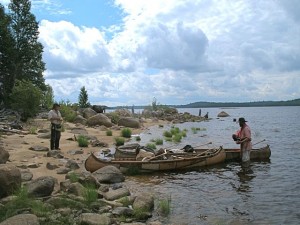 Now, in the fall of 2012, over the course of five expeditions on the fur trade routes in Canada and the US, I have traveled over 4000 kilometres. I have given over 250 voyageur presentations to students and community groups from Windsor to Brockville and Elliott Lake to Sault Ste Marie, all in Ontario, and contributed to school shows in and around Marion, Indiana, relating to the War of 1812.

Jay Bailey is married, with three grown daughters and two grandchildren. He has worked with First Nations people in Manitoba, taught French for 34 years in Manitoba and Ontario, and in 2007 was baptized as a voyageur in the course of a 61 day birch bark canoe expedition.  His website is http://voyageurerrant.wix.com/voyageur1

One thought on “An Historic Voyageur in Modern Times”