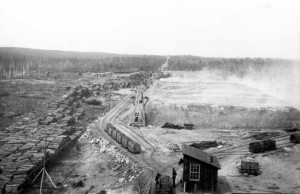 The image of Sudbury, Ontario has long been associated with mining, smelting, and a barren landscape.  Perhaps most famously, the landscape of Sudbury has been said to be comparable to the landscape present on the moon.  Similarly, the image of the towering Sudbury Superstack is one which holds sway in the minds of many Canadians.  However, since the 1970s Sudbury has put considerable financial and community resources into mitigating the ecological impact of mining on the community.

Nickel was identified in the Sudbury Basin as early as 1750. Despite this discovery the early years of industry in Sudbury were dominated by forestry. By the mid 1880s forest fires and clear cut logging had already contributed to significant alteration of the natural landscape of Sudbury.

The industrial scars on the landscape increased as the mining industry developed in the area.  In 1888 the first roast yard and smelter were established in Copper Cliff, and marked the beginning of large scale mining in the Sudbury area. Between 1913 and 1916 the Mond Nickel Company removed all vegetation from the Coniston area to provide fuel for the roasting yard.

The roasting method was used by mining companies in Sudbury until 1929 as the primary means of separating minerals.  Fueled by cordwood these beds resulted in clouds of sulfur dioxide spreading from the beds at ground level. The roast beds have been blamed for much of the environmental destruction in Sudbury.  However, it has also been argued that the later smelter technology also contributed to considerable environmental devastation by releasing sulfur dioxide into the atmosphere.[i]

The result of years of continuous mining and expulsion of associated pollutants resulted in approximately 7,000 lakes within 17,000 square kilometers being acidified, 20,000 hectares of barren land being created in which no vegetation grows and significant erosion has occurred, and 80,000 hectares of semi-barren land.[ii]

In the late 1960s and 1970s major government regulations and local efforts to reduce pollution began. In 1972 the Inco Superstack was built to address the air quality and air pollution problems in Sudbury.  The 1970s also saw the beginning of a regreening program to rehabilitate barren land and improve the image of the city.

This regreening program has resulted in over nine million trees being planted.  Before trees could even start to be planted the soil toxicity problem in Sudbury needed to be addressed.  The barren soil needed to be treated to counteract substantial soil acidity and metal toxicity.  After investigation it was discovered that applying limestone to the impact soil would allow for recovery and reforestation to occur, so between 1978 and 2011 3,435 hectares of land were limed.

In recent years the regreening process has shifted to focus on fostering biodiversity in the reclaimed lands with the aim of establishing natural and sustainable forest areas. Despite this substantial progress 35 thousand hectares within the industrial impact zone have yet to be addressed.  Additionally, the area around Baby Lake is intentionally not being included in the regreening process.  This area will serve as a reminder of the industrial impact on the landscape and as an example of how Sudbury looked prior to regreening.

What impact has regreening had on the Sudbury community?  The obvious answer is that regreening has improved the environmental conditions in the area, air quality has significantly improved and landscapes are returning to their natural state.

Regreening has also contributed to a number of socio-economic factors including a greater sense of pride in community, increased tourism and creation of direct and indirect employment. Sudbury has also become recognized as an international example of a successful regreening project and the city’s approach has been used as a template for dealing with environmental degradation in other cities.

The journey to a landscape that has been completely revitalized is still a long way off, but Sudbury has made considerable inroads in addressing a landscape that has been devastated by industrial environmental impacts.  The process of rehabilitating industrial scale barren land is a great example of a city taking pride in its natural landscape, even if that means acknowledging a legacy of environmental harm.

[i] Winterhalder, Keith. “Environmental degradation and rehabilitation of the landscape around Sudbury, a major mining and smelting area.” Environmental Reviews 4, no. 3 (1996): 185-224.

7 thoughts on “Sudbury: The Journey from Moonscape to Sustainably Green”