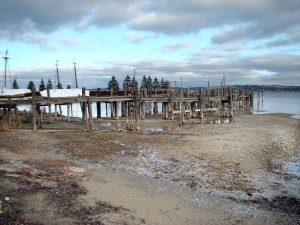 Lake Huron and Lake Michigan recently reached record lows. The other Great Lakes are also below average levels. Headlines such as “Two Great Lakes hit lowest water levels in history” or “Low water levels in Great Lakes cause concern” have been splashed across browsers and newspapers. Docks barely reach water, boats can’t get out of marinas, and beaches have seemingly doubled in size.  What is causing these lows? There are a range of human efforts that influence lake levels: diversions out of the Great Lakes basin (e.g. Chicago Sanitary and Ship Canal or Ogoki-Long Lac); dredging in connecting channels (e.g. St. Clair and Detroit rivers); regulating works (e.g. dams in the St. Mary’s and St. Lawrence rivers), or consumptive uses ranging from agriculture to exporting bottled water, beer, pop, etc.

These dams and diversions certainly have negative ecological effects. But, compared to natural causes, they have only minimal impacts on water levels. Natural factors and cycles are the main causes of water level variability, although the recent extremes are almost certainly attributable to climate change and altered precipitation levels. 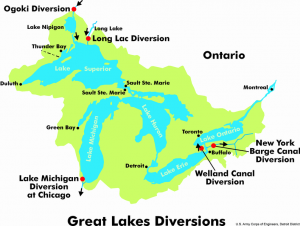 A number of proposals to engineer or in some way attempt to control the water levels have been floated. The International Joint Commission (IJC), the binational body established over a century ago to handle Canadian-American border water issues, is considering the construction of a new structure in the St. Clair River that will help gradually raise water levels in lakes Huron and Michigan.

The wisdom of this, however, is disputable. It seems to be at odds with the conclusion the IJC reached in the 1980s that the economic and environmental costs of further regulation of lakes Michigan and Huron aren’t justified by the benefits. The IJC has certainly tended towards an ecological approach in recent decades, and was from the start quite progressive in terms of pollution. But it has also in the past reflected the “progress” mentality of the dominant political and economic interests of the day.

The IJC was, for example, at the forefront of pushes for water control megaprojects in the decades after the Second World War. One of these was the St. Lawrence Seaway and Power Project, a combined deep canal and hydro dam endeavour built in the 1950s that radically reconfigured the eponymous river. The planning for the St. Lawrence project included regulating the water levels of both the St. Lawrence River and Lake Ontario. It could be considered the first completed binational project that attempted to control water levels on the Great Lakes on a significant scale.

The engineering goal was to maintain the water levels at an average that equated to “natural levels” but also to improve on nature by removing the extremes of high and low flows in order to create a predictable and orderly river and lake that would better conform to human needs. 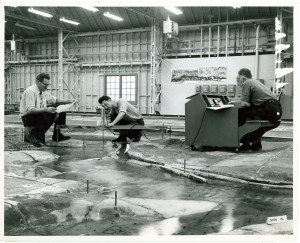 An examination of the engineering discussions and plans for the St. Lawrence project is revealing: the method for regulating the water profile was built on guessing, imprecision, and partisan preferences between different ideas, economic interests, countries, and provinces/states. Behind closed doors, the experts didn’t know what natural conditions were. Part of the problem stemmed from the faith that the engineers placed in their models, which were frequently wrong (see adjoining picture).

The method of regulation for St. Lawrence/Lake Ontario arrived at in the late 1950s is still in place. The IJC is currently looking at replacing it. The new method, titled Bv7, would certainly be an improvement over the existing system because it better accommodates the river’s natural behaviour. But it would still be far from natural.

The scientific understanding of “natural” lake levels evolved considerably over the second half of the 20th century. Researchers discovered that there have been long-term fluctuations (i.e. several consecutive years) since Great Lakes water levels were first recorded in the 19th century. The Great Lakes system experienced extremely low levels in the late 1920s, mid-1930s, and again in the mid-1960s. There were extremely high water levels in the 1870s, early 1950s, early 1970s, mid-1980s, and mid-1990s. Continuous wet and cold years cause water levels to dramatically rise. Conversely, consecutive warm and dry years cause water levels to decline.

Dynamic levels are ecologically beneficial, not just for the lakes but for the surrounding ecosystem. Natural water level fluctuations are really only a problem from a human perspective. There are many path dependencies and activities predicated on predictable and stable water levels – housing, industry, transportation, etc.

Leaving the lakes alone to operate naturally would be ideal, though that probably isn’t realistic in the current economic and political climate. But at the very least we could start to build infrastructure and make plans in ways that respect the natural fluctuations and behaviours of the lakes. A simple step would be to build further away form the shoreline, well out of the historic range of levels.

Our goal should be the long-term environmental health of the area, rather than short-term political and economic aims. We need to heed scientific and ecological warnings. At the same time, in many important respects we still don’t understand why the Great Lakes operate the way they do. We need to critically examine scientific and engineering proposals – they can be part of the answer, but they can also be part of the problem.