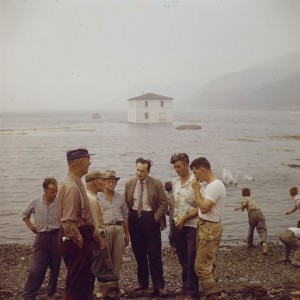 So the government paid us for movin’ away,
And leaving our birthplace for a better day’s pay;
They said that our poor lives would ne’er be the same,
Once we took part in the government game….

Ninety per cent. That was the number on the minds of the eighty-seven residents of Little Bay Islands in Notre Dame Bay, Newfoundland, as they voted on whether to be resettled. It was the bar they had to reach to qualify for government support to move.

People had been leaving the centuries-old community for years, and after the crab plant shut down there were almost no jobs on the island. With a population largely over sixty-five, it employed a teacher (for two students), a school janitor, and two men who looked after the diesel generating station. Islanders had to travel by government ferry to buy groceries or see a doctor – a three or four-hour round trip when the weather allowed.[1]

What I’ve just described could easily be a scene from the 1960s or 70s, when Newfoundland was in the midst of outport resettlement, a program that moved more than 20,000 people in what was the largest government-sponsored relocation of people in Canadian history. But it isn’t: the vote on Little Bay Islands happened at the end of April 2013. The results have yet to be announced.

The continuities between Premier Joey Smallwood’s program and Kathy Dunderdale’s are often noted in reports about Little Bay Islands. Now, as then, resettlement is voluntary. People are free to make up their own minds about whether to stay or go. And now, as then, they’re discovering how coercive and corrosive a voluntary process can be. Perry Locke, the Mayor of Little Bay Islands, doesn’t want to move, and speaks openly about the “intimidation” he felt from his pro-resettlement neighbours who treated him like “the Taliban of Little Bay Islands, holding the community hostage.”[2] Regardless of the outcome of the vote, the process of deciding to stay or go has changed relationships forever.

Resettlement also continues to raise questions about generational justice. Moving is mainly an opportunity for those who have their lives before them: children and adults of working age are the ones who can take advantage of the education and jobs larger and less isolated centres can offer. While access to medical services is a concern for the elderly, their wellbeing is also rooted in history, in a long-standing relationship to place.

Despite the continuities, it’s important to appreciate the differences between resettlement in Smallwood’s day and what’s happening now. They reveal how the state’s role in our lives has changed, helping us to think about what government is and should be.

The joint federal-provincial program that ran from 1965-75 wasn’t just designed to move Newfoundlanders out of isolation: it was also meant to send them to particular places – “growth centres” or “growth poles” – where social services and jobs were more available, or were projected to be. Resettlement was part of an economic development program designed to modernize the fishery and the province, propelling it to the kind of prosperity enjoyed by other Canadians.[3]

In contrast, the current provincial program simply pays people to leave their “unsustainable” communities. It doesn’t tell them where they should resettle nor does it tie their movements to a larger program of development. According to the 2013 Budget Speech, other than the $270,000 it will provide to each qualifying household, the government promises only to “work with” those who decide to leave so they can “reap the benefits of our province’s growth.”[4]

These differences are significant. The directive character of resettlement in the 1960s and 70s and the larger modernization program of which it was a part points to a very different conception of the state and its role than we have now. While there’s no question the program was poorly conceived and executed, and often tragic in its consequences, its intentions are revealing. They speak to a belief held by policymakers and politicians at the time in an activist state, one with a responsibility to intervene in a broad range of activities in the name of improving Canadians’ lives. And Canadians, for their part, seemed to agree.

In all the criticism that was levelled at resettlement at the time, no one, it seems, argued that the state had exceeded the proper bounds of its responsibility by embarking on such an initiative. These were the days when equalization payments and programs to address regional inequality were accepted as legitimate. They were part of the liberal welfare state’s commitment to, as Pierre Trudeau put it, making “a good life” for all Canadians no matter where they lived; that is, providing them with the chance to realize who they were as individuals.[5]

Canadians might take have taken issue with the ways the state tried to make a good life and its definition of it, but few said that wasn’t its job, that it shouldn’t intervene to reduce the frictions of capitalism and provide social security. Indeed, the welfare state is a cornerstone of Canadian identity, for both Canadian and Americans.

In the half-century that separates Smallwood from Dunderdale and Trudeau from Harper, the boundaries delimiting the legitimate sphere of action for liberal democratic states have been redrawn around the world. Seen from this perspective, the federal-provincial resettlement program looks a little different. So too does the Newfoundland government’s latest “investment in towns and communities.”[6] Neo-resettlement comes in the wake of neo-liberalism. Small government means that Ottawa and St. John’s won’t tell people where to go but are instead willing to let the market speak.

For those who are uncomfortable with this new government game, resettlement is a chance to think about the larger issue of how we meet the “needs of strangers.”[7] How much responsibility are we willing to take for each other, with our tax dollars and otherwise, and what institutions do we want to mediate those relationships  – the welfare state or the market? Ultimately, it’s an opportunity to ask who we want to be.

[3] Miriam Wright A Fishery for Modern Times: the Industrialization of the Newfoundland Fishery, 1934-1968 (Toronto: University of Toronto Press, 2001)

One thought on “‘The Government Game’: resettlement then and now”