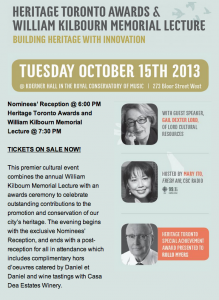 As a number of recent high profile issues have made clear, preserving Toronto’s unique heritage is an ongoing effort full of challenges. However, it’s rare that we stop to celebrate all the things that are right with the city’s heritage and history scene.

On Tuesday, October 15th, Heritage Toronto takes time to do exactly that at the 39th Annual Heritage Toronto Awards & William Kilbourn Memorial Lecture. This premier event celebrates the books, short publications, media, architectural work and community heritage volunteer efforts which have made Toronto a better place today while also telling the story of its past. Councillor and Heritage Toronto Board Member Sarah Doucette says, “This event is a must-attend one for every Torontonian. It celebrates blending old and new in a way that makes our city great.”

Heritage Toronto’s flagship annual public lecture, the William Kilbourn Memorial Lecture, is also delivered at the Awards. The lecture is named for William Kilbourn, an academic, writer, politician, mentor and champion of the arts and humanities in the city.  In his memory, each year a speaker is chosen to reflect the passion and dedication to our city that he inspired. Previous speakers have included David Crombie, Adrienne Clarkson, David Mirvish, John Fulford, Ursula Franklin, Peter Oundjian, Cameron Bailey and Chief Bryan Laforme of the Mississaugas of the New Credit First Nation.

This year’s William Kilbourn Memorial Lecturer is sure to be engaging: Gail Dexter Lord, co-Founder and co-President of Lord Cultural Resources, has advised governments, museums, and other organizations in Toronto and around the world on innovative approaches to culture and heritage. Her lecture topic is “Building Heritage with Innovation.”

The 39th Annual Heritage Toronto Awards & William Kilbourn Memorial Lecture begins with a Nominees’ Reception at 6 p.m. and ends with a post-reception for all in attendance. The Awards and Lecture begin at 7:30 p.m. Both receptions are catered by Daniel et Daniel with complimentary Casa-Dea Estates Winery wine tastings. Woodcliffe Landmark Properties is proud to be Presenting Sponsor and The Restoration Council of Ontario (Carpenters’ Union Local 27 & Restoration Local 598) are proud Nominees’ Reception sponsors.

Ticket prices start at $15 and can be purchased online at performance.rcmusic.ca, by phone at (416) 408-0208, or in person at the Royal Conservatory box office.

The Community Heritage category nominees this year are varied and unique; these volunteer groups are developing interesting and thought-provoking programs to build appreciation for heritage in their respective communities.

Our Book category nominees range from autobiographical recollections of events to explorations of the built heritage and military history of Toronto:

The Media category nominees range from documentary films to mobile apps to websites:

Heritage Toronto is a charitable arms-length agency of the City of Toronto established in 1949 to promote a greater appreciation for the city’s rich architectural, cultural, archaeological and natural heritage. Through partnerships with local community groups and volunteers, Heritage Toronto provides city-wide programs and services.