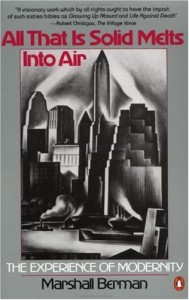 When I learned that Marshall Berman, the great American theorist of modernity, died last month, it seemed appropriate to go back and reread his masterpiece, All that is Solid Melts into Air: The Experience of Modernity. First published in 1982 and then reissued with a new introduction in 1988, this book represented Berman’s attempt to reinvigorate discussions of modernity. In it he sought to reconcile the long-sundered ideas of modernism and modernization, to examine the modern condition and discuss how we could live in the world in the face of constantly accelerating change, to reject the advent of separate post-modernist theories and reintegrate them into larger discussions of modernity, and to return to the intellectual and literary history of modernity in order to find answers that would be useful in understanding its present and future.

All that is Solid Melts into Air was recommended to me by one of my undergraduate history professors and an early mentor at the University of Winnipeg, Dr. David Burley. I read it just after graduating with my BA and realize now that there’s much of it that I didn’t understand at the time. Though I may have missed some of its nuance and complexity at the time, I’ve always remembered it as an important and defining influence on my intellectual development and my continuing fascination with the modern and all that it implies.

Considering its impact on my development, I’ve always been surprised that more historians haven’t read or engaged with Berman and his ideas. I find this strange given Berman’s brilliance and his contribution to making sense of the modern world and to the historical development of ideas of the modern, including both modernism in art and culture and modernization in politics, society and economics. As such it seems to me that in light of his recent death it would be useful to initiate a discussion on this work and encourage other historians to read or reread it.

The book is a collection of five essays, six if you include the introduction, all linked, but all independent. The first essay, the introduction, entitled “Modernity: Yesterday, Today and Tomorrow” effectively serves as a call for a re-examination of modernity and a rejection of its supposed demise in the 1960s and 1970s at the hand of post-modernity and its theorists. In a particularly scathing critique Berman suggests that the various ideas that have emerged under the umbrella of post-modernism are instead simply iterations of the constant intellectual evolution of modernity itself, that in seeking to destroy the modernist ideas that preceded them they have in fact become simply the newest destructive forces that are inherent in the modern cycle of destruction and rebirth. It is in his rejection of Foucault as a representative of post-modern thought that we see most clearly Berman’s purpose. For Berman, Foucault and his allies represent an almost nihilistic point of view in which all of the modern being’s actions are defined and predetermined by the modern world itself. In writing this book Berman is instead seeking to return hope and freedom to an idea of modernity in which while we may face the uncertainty of constant destruction and recreation, we also are able to embrace the freedoms inherent in the modern:

The next three essays represent the theoretical bulk of this book and represent attempts to return our thought to the work of three thinkers that for Berman represent the most important early attempts to wrestle with ideas of modernity. In his examination of Goethe’s Faust, of Marx’s Communist Manifesto, a line from which serves as the title of this book, and of Baudelaire’s essays on modernism, Berman reminds us of the vitality inherent in early expressions of modernity. In Faust Goethe’s hero makes a deal with the devil for the freedoms inherent in the modern state of being. At the same time he must accept the destructiveness and uncertainty that accompany them, highlighting “the vibrant but shaky ground on which we must stake out and build up our lives,” (86) in the modern world.

In engaging with the Communist Manifesto, Berman’s emphasis is on Marx’s understanding of the modern world and its contradictions rather than his political philosophy or historical determinism. Marx’s purpose in this case is to show us the destructiveness of modern human society so that we may be ready to “stretch ourselves to grasp new human possibilities, to develop new identities and mutual bonds that can help us hold together as the fierce modern air blows hot and cold through us all.” (129)

Finally, in discussing Baudelaire, Berman reminds us that though fearsomely destructive, the energy that modernity releases allows us “to live openly with the split and unreconciled character of our lives, and to draw energy from our inner struggles, wherever they may lead us in the end.” (171)

The book concludes with two essays that examine the evolution of modernity in two great cities: St. Petersburg and New York. In discussing 19th century development in St. Petersburg, Berman traces that energy that grows from its modern beginning as a constructed and intentional capital city for Peter the Great’s new, modern, Russia, to the destructive forces that are unleashed in 1917. New York conversely becomes the ultimate expression of the modern, not only as the financial and cultural centre of the modern world, but also as a space in which physical and political modernization has gone hand in hand with the best of artistic and cultural modernism.

Not only is All that is Solid Melts into Air an important and compelling examination of the intellectual origins of the modernist idea, Berman is also a beautiful writer who weaves a compelling vision of both the “adventure and the danger” of modernity and the destructive and creative forces it unleashes.

*The edition cited in this essay is; Marshall Berman, All That is Solid Melts in Air: The Experience of Modernity (New York: Penguin, 1988).