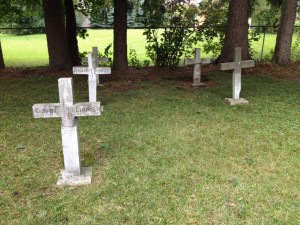 In 2012, I began attending Holy Trinity Anglican Church in Thornhill, Ontario. After learning I was a historian, some church members invited me to join the cemetery board. During my first visit to the church’s historic cemetery, I was intrigued by five concrete crosses marking the graves of eight men, dating from 1928 to 1931. In a poor state of repair, and inscribed only with the names and death dates of the men, they looked nothing like the more elaborate marker that surrounded them, both historic and modern. At the time, I had no idea that over the next year, these crosses would lead me to an investigative journey of the history of early twentieth-century welfare institutions, social policy, homelessness, and unemployment. It was a project that demonstrated the hidden stories and social histories that may be represented through small, seemingly inconsequential artefacts. This article documents my search for answers about these mysterious gravestones.

Built c. 1829-30 on Yonge Street, Trinity Church (as it was formerly known) is the oldest church building still in use in the Anglican Diocese of Toronto. In 1950, the church was moved to Brooke Street, southwest of the original location; however, the cemetery remains at the original site on Yonge. Still in active use, Holy Trinity Cemetery contains several graves of historical significance to the Thornhill and Richmond Hill areas, including the grave of Colonel Robert Moodie, killed on Yonge Street near Montgomery’s Tavern during the 1837 Rebellion. 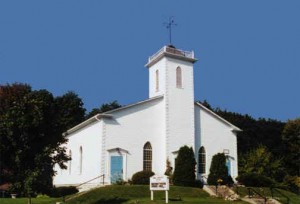 This history made me wonder if the five “mystery” crosses occupying a small rectangular plot of land towards the rear of the cemetery were historically significant. Age, weathering, and inappropriate repairs over eighty years had left them in a deteriorated condition; the names and death dates on some were barely visible. I wondered: Why were these graves so different? Who were these men buried in these plots? What was significant about the period 1928-31? Who installed the markers? Why were they not as structurally sound as other markers in the cemetery?

I asked about the graves at a cemetery board meeting and was told the men were “prisoners” from the Langstaff Industrial Farm. The farm, which opened in 1913 as an adjunct facility to ease overcrowding at Toronto’s Don Jail, operated as a minimum-security men’s prison for inebriates and petty criminals until it closed in 1958.