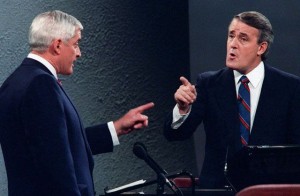 John Turner and Brian Mulroney during the 1988 election debate. Photo via cbc.ca

Intensive negotiations in Maui over the last few days of July failed to finalize the Trans Pacific Partnership (TPP). However, the discussions continue. The negotiations for this comprehensive framework, which would incorporate twelve national economies[1] into an agreement with harmonized standards on tariffs, labour and environmental regulations, are to continue over the Canadian election period. Regardless of whether or not one supports the free-trade ambitions of the TPP, it is imperative that this agreement become a major issue during the current election, as it has far-reaching implications. To give three examples, dairy supply management might be reduced or even eliminated, investor-state dispute resolution mechanisms will challenge national programs, and access to generic drugs could be limited. Proponents of the partnership, such as the recently dissolved Conservative government, point to the potential benefit of access to new markets for an economy that relies heavily on exports.

In 1988, free trade was a relatively new concept, and one endorsed only by the Progressive Conservatives. The Free Trade Agreement between Canada and the United States, signed by Ronald Reagan and Brian Mulroney on 2 January 1988, prompted fierce debate between the three major parties during the November election. Subsequent scholarship has largely cast the 1988 election as a referendum on the agreement, whose implementation had been stalled by the Liberal-dominated Senate. Liberal leader John Turner justified using the (then, as now) unpopular Senate to stall the bill by insisting that such an important issue demanded public input.

The 1988 election debate, particularly an exchange between Turner and Mulroney, is justifiably famous in Canadian politics. Turner and Mulroney hotly debated the implications of the agreement, with Turner accusing Mulroney of selling Canada out, of yielding Canada’s control of its energy and agriculture, and of reducing Canada to an American colony. Mulroney countered with his own nationalist rhetoric, contending that the deal made the Canadian economy stronger, and contributed to the Canadian national project. Ed Broadbent, the NDP leader, is conspicuously absent from the clip, but his party also opposed the FTA. According to political scientist Robert Malcolm Campbell, the dramatic debate refocused the entire election into a referendum on free trade.

Compared to current discussions of free trade, the nationalist tone of the 1988 debate is quite remarkable. While emphasizing the potential risk for national sovereignty was undoubtedly a strategic decision, it is noteworthy that both the Liberals and the NDP felt that the nationalist appeal would work. Post-debate polls indicate that the discussion did spark an increase in anti-FTA sentiment, though the PCs retained enough support for the agreement to secure their majority. Despite the fact that the election was reasonably close, with just under sixty percent of the vote going to anti-FTA parties, the FTA became a fait accompli and a normalized feature of the Canadian economy. Most people in their twenties have lived their entire lives in a free trade Canada.

Political attention to the TPP reflects this normalization. In terms of the rhetoric about free trade and its implications for the nation-state, the 1988 election has more in common with the 1911 rejection of Laurier’s Liberals over the issue of reciprocity with the United States than it does with our current campaign. Aside from some comments on the need to protect farmers and the need for more transparency during the negotiations, the Liberal party supports the TPP. Likewise, the NDP have also come out in favour of the TPP, only criticizing the Conservative negotiators and likewise emphasising the need to defend farmers. Substantive criticism of the TPP has largely been confined to groups such as the Council of Canadians and the Canadian Centre for Policy Alternatives. Given the magnitude of the deal, this is insufficient.

There have been two core consequences of the limited mainstream political division over the TPP. Firstly, commentators who favour the deal have largely been able to limit the consideration of the deal’s flaws to the obvious risks it poses to farmers. Pro-TPP commentators like the National Post’s John Ivison emphasize the relatively small number of farmers who would be directly affected by a TPP mandated end to supply management. In so doing, they cast opposition to the agreement as one based on special interest as opposed to one that emerges from a broad constituency of Canadians. Such commentary also neglects to account for the anxieties that farmers, who deal with real problems like weather, animal health, and high capital costs. It is easy to be glib about the problems of supply management when one is commentating from a distance, and not from the farm.

Secondly, commentators have also fretted about the relatively limited attention Canadians have paid to the TPP. Despite the TPP having the potential to render NAFTA obsolete and require Canada to conform to an entirely new trading regime, Canadian interest has been relatively limited. Thomas Walkom of the Toronto Star rightly notes, “the TPP—if it succeeds—will effect more than cows and chickens.” His editorial evokes older anxieties over free trade, particularly emphasizing how the American negotiators are primarily driving the talks.

Evoking nationalism as a means to criticise the TPP is of limited value. As the 1988 debate illustrates, both proponents and critics of free trade can mobilize nationalism to defend their positions. Free trade advocates insist that Canadian businesses are capable of asserting themselves on a larger economic stage, an approach that effectively undermines nationalist arguments for retaining trade barriers as being parochial, or even cowardly. Nationalist arguments work effectively when deployed not abstractly, but in terms of specific issues, such as the growing power of industrial-state dispute mechanisms to undermine national programs and policies, including environmental regulations. A leaked version of an earlier TPP draft indicates that there are gestures towards environmental regulation across participatory states, but the secretive nature of the negotiations has made it difficult to have public discussion of whether the measures are sufficient or capable of protecting national environmental regulations.

Recalling the 1988 free trade debate is worthwhile because it also reminds us that, while free trade is economic orthodoxy today, it is not timeless. The benefits of the FTA and succeeding NAFTA are debated, although most commentators tend to favour the agreement. Proponents point to the significant increases in trade activity between the three signatories, while detractors highlight the limited wage increases for Mexican workers and the fact that NAFTA’s investor-state dispute settlements have cost Canadian governments (and taxpayers) almost $200 million. Regardless of where one stands on the debate, the fact that Canadian voters had a chance to consider the merits and problems of free trade in 1988 is enviable from our standpoint today. The 1988 debate reminds us that international trade agreements should be subject to public scrutiny. So far, all of the parties are failing to provide that scrutiny for voters. An agreement of this magnitude demands better.