Earlier this month we released Poster #06 by Kara Sievewright and Gary Kinsman, which examines LGBTQ2 resistance and the political history of Pride in Canada.

Pride Has Always Been Political

I am delighted to introduce Kara Sievewright’s wonderful poster, “Pride Has Always Been Political,” that vividly captures our movements in history. For those unfamiliar with Pride, it started off as the celebration of the rebellious origins of the queer and trans liberation movements in resistance to police repression in the later 1960s—ranging from the Compton’s cafeteria riot in San Francisco in 1966 to the more celebrated Stonewall riots in June 1969. The police have been a major vehicle for enforcing heterosexual hegemony and the two-gender binary system.

Since then, the origin of Pride marches have been largely forgotten with the transformation of Pride in larger urban centres into spectator-centred Parades, with commercialization, corporate and government sponsorships, and what I call the emergence of the white middle-class neoliberal queer who is accommodated with capitalist and racist social relations. This has distanced Pride celebrations from their radical (getting to the roots) political beginnings. Others have described this process as “homonormativity” (Lisa Duggan) or as “homonationalism” (Jasbir Puar). Sievewright’s poster works actively against this class-based and racialized process of the social organization of forgetting through activating the resistance of remembering the political roots of Pride.

Starting at the bottom of the poster, Sievewright depicts the Black Lives Matter contingent in Toronto Pride 2016 that brought the Parade to a halt with its sit-in and demands for funding and space for Black queers and trans people, for other queers of colour, and for Indigenous Two-Spirit people, along with the urgent need for the police to not have an institutional presence within Pride as long as they are attacking Blacks and other people of colour and Indigenous people. This inspiring action reminded all of us of the activist roots of Pride.

Returning to the top, we see the depiction of the Montréal resistance to the Olympic police repression in 1976 and to the raid on the Truxx bar in 1977. It was these revolts in the streets that led to Québec enacting sexual orientation protection in late 1977. This resistance continued in Toronto with the mass response to the 1981 bath raids which at that point were the largest mass arrests since the War Measures Act in 1970. It was this resistance that provided the context for the celebration of Lesbian and Gay Pride Day to mark the Stonewall riot in June 1981 in Toronto which has continued to today. The events that day were both a celebration and very political as we stopped in front of the Headquarters of the 52 Division of the Police (which had carried out the bath raids) chanting “Fuck You 52!”

The banner “We’re Asians Gay and Proud” signals the growing self-organization of queer and trans people of colour in the later 1970s and 1980s who were finding that their needs were not being addressed in the white-dominated gay communities where they faced racism, nor in their own communities of colour where they faced heterosexism and anti-trans discrimination. Black Lives Matter Toronto with its many queer and trans members continues and extends this tradition of organizing.

The bottom half of the poster depicts the major wave of AIDS activism organized by AIDS ACTION NOW! and various ACT UP groups in the later 1980s and early 1990s as people fought for their lives. Silence did literally mean death and direct action meant life. The image of the police arrest is from a demonstration against the police arrests at Sex Garage (a queer warehouse party) in 1990 that catalyzed queer organizing in Montréal.

Then Queers Against Israeli Apartheid (QuAIA) in Toronto Pride is depicted. QuAIA built on the spirit of anti-apartheid organizing against the separation and subordination policies of the former South African racist government but this time in opposition to the polices of the Israeli state against Palestinians. In response to this challenge to official Canadian support for and the “pinkwashing” of Israeli policies, QuAIA faced banning and major opposition from homonationalist forces within the Pride Committee and from City politicians.

It is very fitting, as mentioned above, that the powerful 2016 Black Lives Matter protest ends the poster (if you read it from top to bottom that is). This poster provokes actively remembering our histories while providing hope for a future where we can make socially transformative and liberationist queer and trans movements. 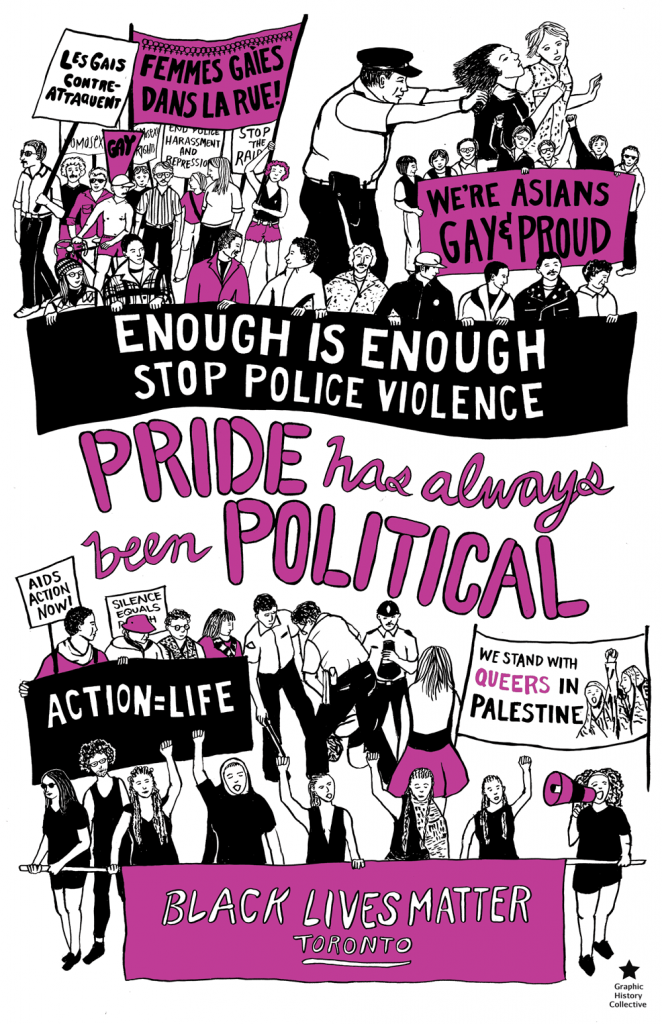 Gary Kinsman is a queer liberation, anti-poverty, and anti-capitalist activist on Indigenous land. He is the author of books and articles on sexual and gender regulation and is a professor emeritus in the Sociology Department at Laurentian University, Sudbury.

Kara Sievewright is an artist, writer, and designer who has published comics in many magazines and anthologies. She has been a member of the Graphic History Collective since 2015 and is currently working on a graphic novel. She lives in Daajing giids, Haida Gwaii as a settler on Haida territory. You can see more of her work at www.makerofnets.ca.