By Colleen Burgess and Thomas Peace

In 1898, T. Watson Smith delivered a detailed lecture on the history of slavery in Canada to the Royal Nova Scotia Historical Society. In it he lamented:

Our historians have almost wholly ignored the existence of slavery in Canada. A few references to it are all that can be found in Kingsford’s ten volumes; Haliburton devotes a little more than a half-page to it; Murdoch contents himself with the reproduction of a few slave advertisements; Clement, the author of the school history accepted by nearly all the provinces, dismisses it with a single sentence; and in the long manuscript catalogue of Canadian books, pamphlets and papers gathered during a long life-time by the late Dr. T. B. Akins – a large and very valuable collection – the word “slavery” nowhere appears, even as a sub-heading.

The end of this quotation is perhaps most direct. In 1898, Watson Smith is saying: most historians do not see slavery as a subject requiring independent study.

The work of historians like Afua Cooper, Karolyn Smardz-Frost, Marcel Trudel, James W. St. G. Walker, and Amani Whitfield (among many others) demonstrates that nearly 120 years later this is no longer the case.

Last month, though, following the publishing here of a piece about treaties and public memory in Ontario that drew on Drew Lopenzina’s concept of Unwitnessing, and a presentation about the Library of Congress classification system run by Colleen in Tom’s North American history course, we began to think that perhaps things haven’t changed as much as we thought they had.

The Library of Congress Classification system (LCC) and the Library of Congress Subject Headings (LCSH) continue to reflect the world Watson Smith so severely critiqued. Scholarship has changed, but the frames within which it has been placed have not. If we are going to witness the way past assumptions about the world continue to structure our present, we feel a need to make these biases even more transparent. 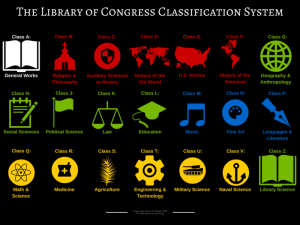 An Infographic detailing the various disciplines covered by the Library of Congress Classification System. By Shonnmharen (Wikimedia Commons)

In Queering the Catalog: Queer Theory and the Politics of Correction, librarian Emily Drabinski reviews the work of librarians – be they cataloguers, public service librarians, teaching and learning librarians, etc – and scholars working in Library and Information Science (LIS) to address how information is organized and made accessible to the public. In summarizing their work, she writes:

In both their activism and their scholarship, librarians have convincingly made the case that Library of Congress Classification (LCC) and Library of Congress Subject Headings (LCSH) fail to accurately and respectfully organize library materials about social groups and identities that lack social and political power. Librarians have worked to correct incorrect classification decisions and have argued for the expansion and correction of subject headings. The critical cataloging movement has addressed the problem of bias in these structures primarily as a functional problem: materials are cataloged incorrectly, and they can be cataloged correctly with the correct pressure from activist catalogers. This project has meaningfully pointed out the trouble with classification and cataloging decisions that are framed as objective and neutral, calling attention to the fundamentally political project of sorting materials into categories and then giving those categories names (95).

In resisting the notion that librarians can work to ‘correct’ the problems created by categorizing materials, she writes:

This analytic approach locates the trouble with library classification and cataloging systems in the project of fixity itself: as we attempt to contain entire fields of knowledge or ways of being in accordance with universalizing systems and structures, we invariably cannot account for knowledges or ways of being that are excess to and discursively produced by those systems. From a queer perspective, critiques of LCC and LCSH that seek to correct them concede the terms of the knowledge organization project: that a universalizing system of organization and naming is possible and desirable (96).

Through a reading of the problem of categorizing and naming information within a queer theory lens, Drabinski suggests that one solution is to engage students in a critique of library systems that name and organize information about social groups and identities that lack social and political power.

This is what we did in Tom’s course Red, White, Black, et Blancs. Inspired by Drabinski’s work, Colleen designed a session that aims to illuminate for students the hegemony within the LCC and LCSHs, dismantling the myth of neutrality within information organizational schemes. The exercise orients students both to the implications this structure has on their research as well as strategies for working with this flawed system in their research projects.

The class begins by identifying different types of hegemony and examples of it in the LCSHs. We start with a basic definition from Merriam Webster that defines hegemony as the “the social, cultural, ideological, or economic influence exerted by a dominant group”. From here we discuss how information is often presented in library systems and on library shelves as politically ‘neutral.’

Some students in this type of session have not given much thought to how information is labelled, organized or located.  Inevitably, this discussion begins to resonate with students who have had the frustrating experience of not being able to find information they have a hunch exists somewhere in the system, and their later frustration at finding it where they least expected it to be kept.

We then discuss the difference between a personal approach to naming and housing information, such as the system created by a student to organize and name assignments on their laptop, and an institutional approach for multiple users. At the personal level, the single creator and user of the system is the only one impacted by the values, biases, and authority informing how information is named and organized. Within these systems, a natural everyday language is often used. At an organizational and collective level, where users might come to the library with various natural languages to describe a topic, we explore why libraries use controlled vocabularies and the impact these vocabularies have on our research processes.

We want to illustrate to students the importance these decisions have on their research process. Not only that their natural language choices might not correspond to how that information has been categorized, but also that the values, beliefs, and context of the authority of the group authoring the controlled vocabulary can perpetuate a variety of types of hegemony.

In the case of the LCC and LCSHs, this organization remains antiquated by nineteenth-century structure. To illustrate this point, let’s take a sample of books that have influenced the field of slavery studies in Canada over the past fifty years and see where they sit in the LCC classification system:

Looking at the Library of Congress subject headings, we see that Watson Smith’s critiques of his late nineteenth-century colleagues continues to hold somewhat true. The books are divided by their various classification schemes:

Though we can see the logic for categorizing each of these books, it is immediately apparent how this classification scheme works against a coherent synthesis of the subject of slavery in Canada. If we were to browse the shelves here at Western looking for more on this subject, the topics we would come across are quite varied. Here are the books that sit on the shelves beside our selected texts:

The point here is that depending on the cataloguer, books on slavery in Canada can end up in various places, many of which are only remotely linked to the histories of slavery in the Americas.

There are a number of reasons for this. First, the LCC is oriented to the U.S. context. This means that the histories of peoples whose social, political and economic networks fit poorly within this framework become much harder to find.

Second, as Watson Smith identified so long ago, slavery is not a subject in which cataloguers seem to have much interest. Slavery does not at all appear, for example, in Library and Archives Canada’s listing of subjects to be included as part of FC, a unique-to-Canada code for Canadian History, (the colonial history of the Maritimes and elsewhere is similarly ignored).

Likewise, in the U.S. system, slavery as a historical subject, is mostly relegated to a tertiary subheading confined to the period between the American Revolution and the U.S. Civil War:

Teaching students to critically read the catalogue has the power to change the ways students search for information. It challenges them to be resilient in seeking the information they require for their research assignments and interests, and it offers them a new set of tools to use when they inevitably encounter challenges in the research process.

In writing this post, we hope to provide a resource to better think though how the information you use is categorized, but also to spark a conversation about how the way we structure our information affects systems of power in Canada. In our library classification systems we continue to root our research in the structures so clearly critiqued by Watson Smith one hundred and twenty years ago.

Colleen Burgess is the Teaching and Learning Services Librarian at Huron University College where Tom Peace is a Canadian History professor.