Doug Ford invoking the Notwithstanding Clause to slash the size of Toronto City Council generated fiery responses from both supporters and detractors. Regardless of where one stood on the issue, all commentators were quick to argue that their side was the one protecting democratic norms and practices while their opponents were undermining them.

Premier Ford made this point in the bluntest manner possible: “I was elected,” the Premier explained, “[Justice Edward Beloboba] was appointed.” He later told CTV news that using the Notwithstanding Clause was “about preserving the will of the people, [it] is about preserving democracy.”

Other Progressive Conservative (PC) supporters expanded on Ford’s argument. Political strategist Ginny Roth told CBC News that Ford “was explicitly elected to make change and I think a key part of his mandate is to do politics differently.”

Despite claiming that the Premier has a mandate for change, it is unclear how that mandate was conferred. His PC Party won 40% of the popular vote and with only 58% of eligible voters casting their ballot, only a little under a quarter of Ontario voters elected Ford.

Importantly though, under the First Past the Post (FPTP) system the popular vote is irrelevant in determining who holds power. What matters is which party leader can command the confidence of the legislature. Having won 76 seats compared to the combined 48 seats of the NDP, Liberals and Greens, the PC Party and Ford secured a strong majority at Queen’s Park.

Yet in justifying their actions Ontario conservatives appealed not to their dominant position in the provincial parliament, their actual legal position, but rather that they were granted a mandate to speak for the people of Ontario, which is a much more objectionable statement.

Making such arguments, however, is not new in Canadian politics. Rather, to understand the roots of this rhetorical strategy we have to go back to Liberal Prime Minister William Lyon Mackenzie King and his attacks on Conservative Prime Minister Sir Arthur Meighen in 1920-21. 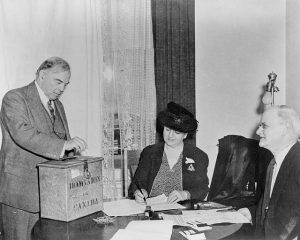 Rt. Hon. W.L. Mackenzie King voting in the plebiscite on the introduction of conscription for overseas military service (Wikimedia Commons)

Prior to the 1921 Federal Election Campaign, which pitted Conservative Prime Minister Meighen against newly chosen Liberal Leader Mackenzie King, the idea of a democratic mandate was alien to Canadian politics. Instead of Canada or Great Britain, the idea of elected leaders holding a mandate from the people first emerged in the populist rhetoric of the seventh President of the United States, Andrew Jackson. Jackson was the first president to articulate the idea that the office of the President embodied the will of the American people; his election to the presidency meant he was empowered directly by the people to implement his campaign promises.[1]

Jackson’s views were anomalous among 19th century presidents however. The majority accepted principles that argued for legislative superiority over the executive. In 1912 Woodrow Wilson’s electoral victory marked the reintroduction of mandate politics to American democracy. Rather than accepting the argument that legislative superiority was imperative for true democracy, Wilson inverted the proposition, arguing that legislative restrictions on presidential power were undemocratic. For Wilson, as for Jackson before him, the president was the truly elected representative of the American people and had a popular mandate to act on their behalf. Congressmen and Senators, on the other hand, only spoke on behalf of specific interests.[2]

King lived in the United States during both of Wilson’s election campaigns and the entire eight years of his presidency. An astute observer of politics, King would have seen how Wilson adapted Jackson’s one hundred year old rhetoric and updated it for the 20th century.

Upon being chosen as Liberal Leader in late 1919 the idea of a democratic mandate was a particularly attractive tool for King and the Liberals. It provided the intellectual base for their attacks on Arthur Meighen’s Conservative Government.

The Tories had held power since 1911 when the party, led by Sir Robert Borden, defeated Wilfrid Laurier’s Liberals. Meighen had been an integral minister in Borden’s wartime cabinet and had served as the public face of the government’s efforts to introduce conscription in 1917, making him deeply unpopular with many segments of the Canadian electorate. Upon being sworn in as Prime Minister, however, he was not constitutionally obliged to face the electorate in a general election for another 18 months. This time could give Meighen and his government the ability to establish themselves as an effective administration capable of managing Canada’s transition back to peace. King and the Liberals thus needed a way to delegitimize Meighen’s government and force the Conservatives to the polls.

The idea of a mandate to govern was their solution.

With the transition from Borden to Meighen, King and the Liberals shifted into campaign mode. After parliament rose for the summer in 1920, King undertook an extensive speaking tour of English Canada, seeking to win back voters who had supported the Liberal-Unionists, as well as undermine public faith in the Conservative Government. Often giving three speeches a day, King traveled throughout Ontario and the Prairies. In these speeches he demonstrated the line of attack the Liberal Party would pursue until the federal election in 1921.

A speech King delivered in Newmarket, Ontario in August 1920 provides a clear template for how he would invoke the idea of a popular mandate over the next year. King started off by telling the audience that “[Canada] has a Government democratic in form, but autocratic in behavior.” In King’s reasoning, Meighen’s leadership was autocratic. Adherence to true democratic principles would have:

Demanded a new Parliament and a new ministry at the termination of the war. It certainly demanded recognition of these fundamental rights of the people upon the retirement of Sir Robert Borden and the resignation of his entire ministry. Instead of reconstruction we have had the most glaring example of usurpation of the rights of the people in matters of government which it would have been possible for the combined forced of reaction to afford.[3]

Keen to demonstrate that true adherence to democratic principles would compel Meighen to resign and dissolve parliament, King argued that any government needed the support of the Canadian people as a whole, or a mandate, rather than the simple constitutional requirement of the support of the majority of members of the House of Commons. Indeed, in this speech King argued that it was the right of the people to pronounce on any new Prime Minister in a general election.

Yet legally this right does not exist in the Westminster tradition, either in Canada or Britain. Rather, in order to force a federal election as soon as possible King pronounced the Meighen government in violation of the rights of the Canadian people, even if those rights were borrowed by the Liberal Party from American Presidential politics.

In this Liberal articulation of democratic legitimacy, any potential government needed to secure a mandate to govern from the Canadian people and the mandate could only be conferred in a general election. Throughout 1920, King and the Liberals were keen to demonstrate how the incumbent Conservative administration did not live up to this new standard for legitimacy. In another campaign style speech King told a North York, Ontario audience:

It must be perfectly clear that [The Meighen government] has received no mandate whatsoever from the Canadian people. By the wildest stretch of the imagination, these gentlemen cannot be regarded as in any sense of the word members of a ministry that is representative of the popular will. Not only is the Government indifferent to the voice of the people as expressed at the polls in several by-elections and in the daily press, it is equally indifferent to its waning support in the House of Commons itself.[4]

Yet these barometers of popular opinion that King pointed were only indicators of how people felt, they had no legal force. All that mattered was that the Union Government maintain the support of a majority of members in the House of Commons, which Meighen continued to do.

Ultimately, in the general election of 1921, Mackenzie King’s Liberals won 41% of the popular vote; a parliamentary majority of one seat. The party’s power base, however, was concentrated in Ontario and Quebec, with the Liberals only managing to win seven seats west of Ontario. Furthermore, despite a slim majority in Parliament, a majority of voters had voted against the Liberals. Nonetheless, under the first past the post system King was sworn in as Prime Minister.

Clearly, rules regarding the mandate were flexible for the Liberals. Unlike today where leaders like Ford claim that they have received a mandate from the people to implement a specific course of action – think Ford’s promises to introduce buck a beer and repeal the sex-ed curriculum – King had no sweeping changes he campaigned on. While in a few specific instance, such as criminal code and immigration reform, King claimed that he, as the elected leader, had a mandate from the people to introduce these policies, King’s claim to mandate was mostly designed to prevent the Senate from modifying or blocking these bills.

In 1921 simply gaining power was enough for the Liberals. It would take future campaigns for political leaders to claim a mandate to enact specific changes.

The 1921 Federal Election campaign therefore marked the introduction of mandate politics to Canada and as Ford’s claims regarding Bill 5 demonstrate, almost 100 years later it is still with us. By separating, at least rhetorically, the legal and moral rights to govern, King as Prime Minister was able to later undermine perfectly legal attempts to limit or remove the Liberals from power. Yet without a clear definition of what exactly constituted a mandate or how one could be conferred, the Liberals could deploy the concept in multiple different contexts when in both government and opposition.

The overall impact of this tactic was to reduce the effectiveness of checks on the power of the executive. For, if the premier or prime minister and their cabinet were empowered by the people to speak and legislate on their behalf, those who oppose the leader and their party were, by implication, the opponents – or worse – of the people. No matter how constitutionally valid checks on power such as the Supreme Court or a vote of no-confidence in the legislature are, they were increasingly presented to the public as irrelevant to who has the moral right to govern.

Hence in defending a bill that slashes citizen’s democratic representation at the municipal level, and has been ruled as violating Canadian’s basic rights, Doug Ford can claim that he is actually the one defending the rights of the people from the interests of the ‘elites’.

These claims are only meaningful, however, if believed. In order to be acceptable, the voting public must be primed to accept them. This priming process started in 1921 and continued on from then.

In sum, if you want to find someone novel to blame for Doug Ford, look no further than Canada’s longest serving Prime Minister.

Adam Coombs is a PhD Candidate in History at UBC. He is working on the relationship between party politics and democracy in 1920s and 30s Canada. This piece represents a small section of that work.

One thought on “You Can Blame Mackenzie King for Ford”