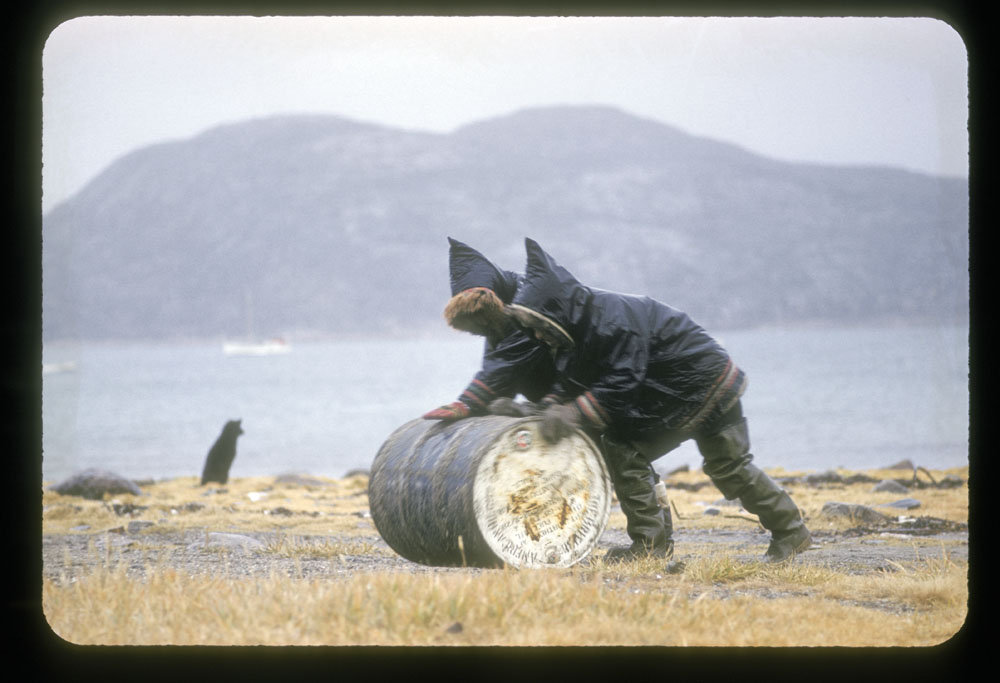 This is the sixth post in a collaborative series titled “Environmental Historians Debate: Can Nuclear Power Solve Climate Change?”. It is hosted by the Network in Canadian History & Environment, the Climate History Network, and ActiveHistory.ca.

If nuclear power is to be used as a stop-gap or transitional technology for the de-carbonization of industrial economies, what comes next? Energy history could offer new ways of imagining different energy futures. Current scholarship, unfortunately, mostly offers linear narratives of growth toward the development of high-energy economies, leaving little room to imagine low-energy futures. As a result, energy historians have rarely presented plausible ideas for low-energy futures and instead dwell on apocalyptic visions of poverty and the loss of precious, ill-defined “standards of living.”

The fossil fuel-based energy systems that wealthy, industrialized nation states developed in the nineteenth and twentieth centuries now threaten the habitability of the Earth for all people. Global warming lies at the heart of the debate over future energy transitions. While Nancy Langston makes a strong case for thinking about the use of nuclear power as a tool for addressing the immediate emergency of carbon pollution of the atmosphere, her arguments left me wondering what energy futures will look like after de-carbonization. Will industrialized economies continue with unconstrained growth in energy consumption, expand reliance on nuclear power, and press forward with new technological innovations to consume even more energy (Thorium reactors? Fusion reactors? Dilithium crystals?)? Or will profligate energy consumers finally lift their heads up from an empty trough and start to think about ways of living with less energy? Unfortunately, energy history has not been helpful in imagining low-energy possibilities.

For the past couple of years, I’ve been getting familiar with the field of energy history and, for the most part, it has been the story of more. [1] Energy history is a related field to environmental history, but also incorporates economic history, the history of capitalism, social history, cultural history and gender history (and probably more than that). My particular interest is in the history of hydrocarbons, but I’ve tried to take a wide view of the field and consider scholarship that examines energy history in deeper historical contexts.

There are several scholars who have written such books that consider the history of human energy use in deep time. For example, in 1982, Rolf Peter Sieferle started his long view of energy history in The Subterranean Forest: Energy Systems and the Industrial Revolution by considering paleolithic societies. Alfred Crosby’s Children of the Sun: A History of Humanity’s Unappeasable Appetite for Energy (2006) begins its survey of human energy history with the advent of anthropogenic fire and its use in cooking. Vaclav Smil goes back to so-called “pre-history” at the start of Energy and Civilization: A History (2017) to consider the origins of crop cultivation.

In each of these surveys energy historians track the general trend of growing energy use. While they show some dips in consumption and global regional variation, the story they tell is precisely as Crosby puts it in his subtitle, a tale of humanity’s unappeasable appetite for greater and greater quantities of energy.

The narrative of energy history in the scholarship is remarkably linear, verging on Malthusian. According to Smil:

Civilization’s advances can be seen as a quest for higher energy use required to produce increased food harvests, to mobilize a greater output and variety of materials, to produce more, and more diverse, goods, to enable higher mobility, and to create access to a virtually unlimited amount of information. These accomplishments have resulted in larger populations organized with greater social complexity into nation-states and supranational collectives, and enjoying a higher quality of life. [2]

Indeed, from a statistical point of view, it’s difficult not to reach the conclusion that humans have proceeded inexorably from one technological innovation to another, finding more ways of wrenching power from the sun and Earth. The only interruptions along humanity’s path to high-energy civilization were war, famine, economic crisis, and environmental collapse.

Canada’s relatively short energy history appears to tell a similar story. As Richard W. Unger wrote in The Otter~la loutre recently, “Canadians are among the greatest consumers of energy per person in the world.” And the history of energy consumption in Canada since Confederation shows steady growth and sudden acceleration with the advent of mass hydrocarbon consumption between the 1950s and 1970s. Steve Penfold’s analysis of Canadian liquid petroleum use focuses on this period of extraordinary, nearly uninterrupted growth in energy consumption. Only in 1979 did Canadian petroleum consumption momentarily dip in response to an economic recession. “What could have been an energy reckoning…” Penfold writes, “ultimately confirmed the long history of rising demand.” [2]

I’ve seen much of what Penfold finds in my own research on the history of oil pipeline development in Canada. Take, for instance, the Interprovincial pipeline system, Canada’s largest oil delivery system. For much of Canada’s “Great Acceleration” the history of more couldn’t be clearer: 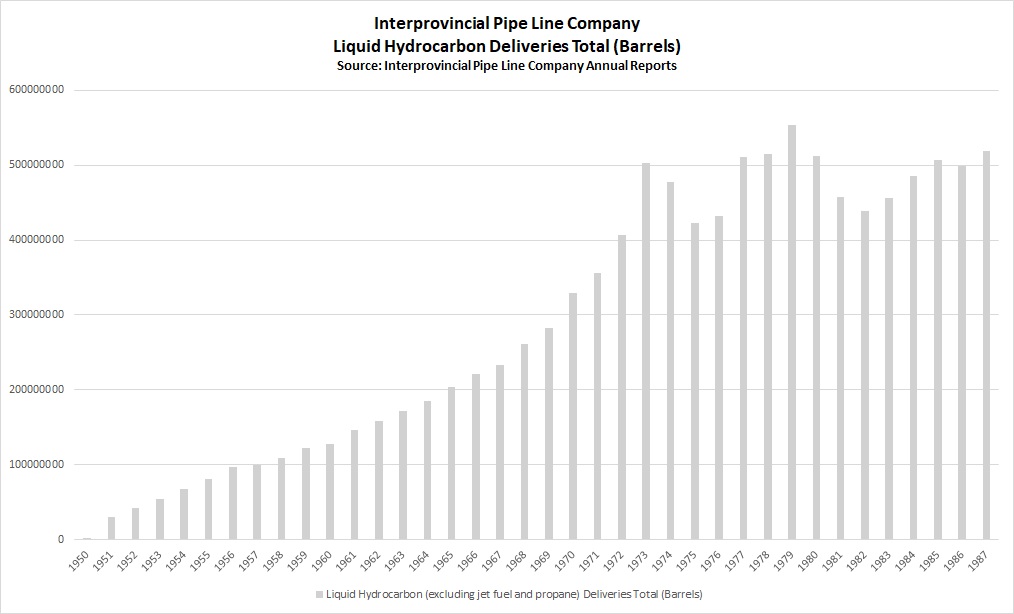 This view of energy history as the history of more informs some of the conclusions (and predictions) of energy historians. Crosby is, perhaps, the most optimistic about the potential of technological innovation to resolve what he describes as humanity’s unsustainable use of fossil fuels. In Crosby’s view, “the nuclear reactor waits at our elbow like a superb butler.” [4] For the most part, he is dismissive of energy conservation or radical reductions in energy consumption as alternatives to modern energy systems, which he admits are “new, abnormal, and unsustainable.” [5] Instead, he foresees yet another technological revolution as the pathway forward, carrying on with humanity’s seemingly endless growth in energy use.

Energy historians, much like historians of the Anthropocene, have a habit of generalizing humanity in their analysis of environmental change. As I wrote last year in The Otter~la loutre, “To understand the history of Canada’s Anthropocene, we must be able to explain who exactly constitutes the “anthropos.”” Energy historians might consider doing the same. The history of human energy use appears to be a story of more when human energy use is considered in an undifferentiated manner. The pace of energy consumption in Canada, for instance, might look different when considering the rich and the poor, settlers and Indigenous people, rural Canadians and urban Canadians. Globally, energy histories around the world tell different stories beyond the history of more including histories of low-energy societies and histories of energy decline. Most global energy histories focus on industrialized societies and say little about developing nations and the persistence of low-energy, subsistence economies.

If Smil is correct and “Indeed, higher energy use by itself does not guarantee anything except greater environmental burdens,” then future decisions about energy use should probably consider lower energy options. [6] Transitioning away from burning fossil fuels by using nuclear power may alleviate the immediate existential crisis of global warming, but confronting the environmental implications of high-energy societies may be the bigger challenge. To address that challenge, we may need to look back at histories of less.

[1] I’m borrowing from Steve Penfold’s pointed summary of the history of gasoline consumption in Canada: “Indeed, at one level of approximation, you could reduce the entire his-tory of Canadian gasoline to a single keyword: more.” See Steve Penfold, “Petroleum Liquids” in Powering Up Canada: A History of Power, Fuel, and Energy from 1600 ed. R. W. Sandwell (Montreal: McGill-Queen’s University Press, 2016), 277.

Sean Kheraj is the director of the Network in Canadian History and Environment. He’s an associate professor in the Department of History at York University. His research and teaching focuses on environmental and Canadian history. He is also the host and producer of Nature’s Past, NiCHE’s audio podcast series and he blogs at http://seankheraj.com.