This is the seventh of several posts marking the 75th anniversary of D-Day and the end of the Second World War as part of a partnership between Active History and the Juno Beach Centre. If you would like to contribute, contact series coordinator Alex Fitzgerald-Black at alex@junobeach.org.

After a series of hard-fought battles, the first Anglo-Canadian patrols stepped foot in the rubble-strewn streets of Caen on 9 July 1944. The ancient city of William the Conqueror was a post-apocalyptic disaster zone. Two-thirds of it was utterly demolished. Parts of the city were entirely cut off and isolated due to the heaping mounds of rubble. Out of a population of 60,000 people at the beginning of 1944, 25,000 were still residing within the city with approximately 13,000 of them living in makeshift shelters and caves. Nearly 3,000 civilians lay dead and 1,500 wounded. Hundreds of bodies lay scattered in the streets and buried under rubble. There was no running water, no sanitation, no electricity, barely any medical supplies, and food was running short. The civilian population was in dire need of help and this help would come from II Canadian Corps Civil Affairs. 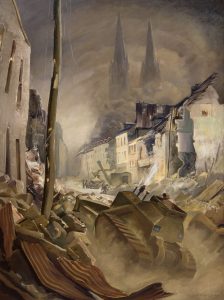 The men of Civil Affairs (CA) were an unusual bunch. Most were too old to be active combat officers (the Senior Civil Affairs Officer in Caen, for instance, was a 52-year-old Scotsman) and many of them were selected for Civil Affairs because of their civilian experience (bankers, lawyers, police officers, academics, etc). The Civil Affairs branch of II Canadian Corps was responsible for taking care of the civilian population of Caen. If the civilians were fed, cared for, and their movements controlled, senior Allied officials figured they would not interfere with Allied military operations. Thus, the concern for the civilian population was couched within the overriding desire to continue to bring pressure on the German military which was now falling back in northern France.

Caen, in fact, was the first major urban area that Canadian Civil Affairs encountered as an organization and would become the testing ground for early practices. The responsibilities of II Canadian Corps Civil Affairs revolved around several areas: re-establishing basic city infrastructure, providing food, water and medical support, enforcing law and order, and controlling refugee traffic both in and out of the city.

Within this extremely broad spectrum of responsibility, the two most challenging tasks were the maintenance of law and order, and refugee control. With the city demolished and so many of its inhabitants homeless and displaced, looting became a serious problem. II Canadian Corps CA deputized local resistance fighters and organized and increased the size of the gendarmerie (the local police force) in order to combat the problem. They also increased the presence of military police within the town, and put up extensive out-of-bounds signage, often warning of booby traps and mines to deter would-be looters.

While this seemed to work for would-be French looters, problems continued to persist with looting by Canadian soldiers. Food, wine, souvenirs, and cash were common targets. In one of the more aggressive incidents, two Canadians brandishing Sten guns held up a wine merchant for a barrel of his finest red. With mounting concern over this issue, Colonel J.J. Hurley (Senior Civil Affairs Office for II Canadian Corps) decided to make the entire city out of bounds for any soldier without a pass. Thus, any soldier in Caen without the proper papers could be subject to military discipline. This, combined with the expanded police presence within the city, seemed to finally do the trick. 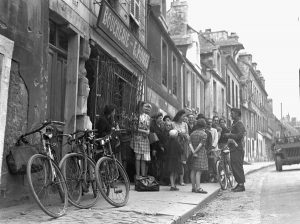 Refugee control was perhaps the most daunting task for the men of II Canadian Corps Civil Affairs. Tens of thousands of refugees were huddled in basements, in makeshift shelters made of ruins and debris, or in the various cave systems below the city (cave systems that had been used for centuries by civilians hiding from marauding armies). Throughout mid-July a series of evacuations occurred whereby groups of refugees were led out of the city by the men of Civil Affairs (sometimes transported in military vehicles, sometimes leaving on foot). In fact, the front line remained only a few miles south of Caen until Operation Totalize on 7 August. During these evacuations German shelling and bombing from the Luftwaffe continued, causing further civilian casualties.

Refugee centres functioned north of the city, away from the serious fighting. From there, refugees would be further dispersed into the Norman countryside. When the fighting in Caen finally ceased on 20 July many were finally allowed to return via strictly established routes so as not to interfere with the movement of military vehicles and personnel heading into the Battle of the Falaise Pocket further south.

Caen was in many ways a testing ground for Civil Affairs practices within II Canadian Corps, and thus First Canadian Army. It was the first major urban centre encountered for Canadian CA and thus the first major opportunity to apply most of the training the men had received.

Not everything worked and the men learned important lessons such as the need for better centralization of command for CA operations in an urban area, standardization of refugee policy across detachment jurisdictions, greater resources spent on the establishment of law and order, and more effective cooperation between CA detachments and combat units. Doctrine and practice were adjusted accordingly. Canadian Civil Affairs would continue to be challenged in northern France as First Canadian Army marched eastwards to liberate the channel ports of Le Havre, Boulogne, Calais and Dunkirk, yet the experience gained at Caen would provide an important operational template for CA practices to evolve and improve.

Theirs was a crucial yet often forgotten cog in the Canadian war machine, ensuring that civilian populations were cared for enough to limit their interference with the ongoing fight against Nazi Germany.

David Borys is a Canadian historian who examines the relationship between war, society and identity. He is also the host of the popular podcast Cool Canadian History, a bi-weekly podcast on everything to do with Canadian history.