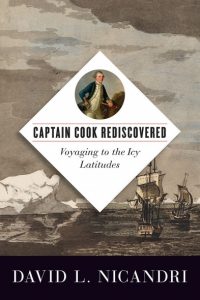 Captain James Cook sailed with British Royal Navy through the middle of the 18th century, travelling to Newfoundland, where he made detailed maps, before making three trips to the Pacific Ocean. These travels cemented his place in the European historical narrative, as he was the first recorded European to land on Australia’s eastern coastline, circumnavigate New Zealand, and to make contact with the Hawaiian islands. He has long been commemorated for these as his likeness appeared on the commemorative sesquicentennial half-dollar in Hawaii and he is the namesake of the first post-secondary institution in North Queensland, Australia.

What hasn’t gotten as much attention, however, were Cook’s travels north. During one of his journeys, for example, he travelled along the Alaskan coast and was tempted to attempt a crossing of the Northwest Passage before turning back south. Along the way, he made some key observations about sea ice formation and wildlife that, when considered from a 21st century perspective, offer interesting insights into some of the changes brought on by climate change.

This is the focus of David Nicandri’s new book Captain Cook Rediscovered: Voyaging to the Key Latitudes. Nicandri addresses what he refers to as the ‘palm-tree paradigm’ as he situates Cook’s career within his polar voyages. He notes the significance of Cook’s scientific work on sea ice, as he challenged the then accepted consensus on how sea ice was formed. Through these observations and his cartographic work, Cook increased European knowledge of the region. Nicandri also notes the value of Cook’s journals as a source for modern scientists studying the changes happening across the region as sea ice continues to decrease.

In this episode of the History Slam, I talk with David Nicandri about the book. We talk about Cook’s career, the significance of sea ice science, and Cook’s contacts with Indigenous peoples and his place within European colonialism. We also talk about the palm-tree paradigm, the importance of the Northwest Passage, and the threat of climate change to polar environments.