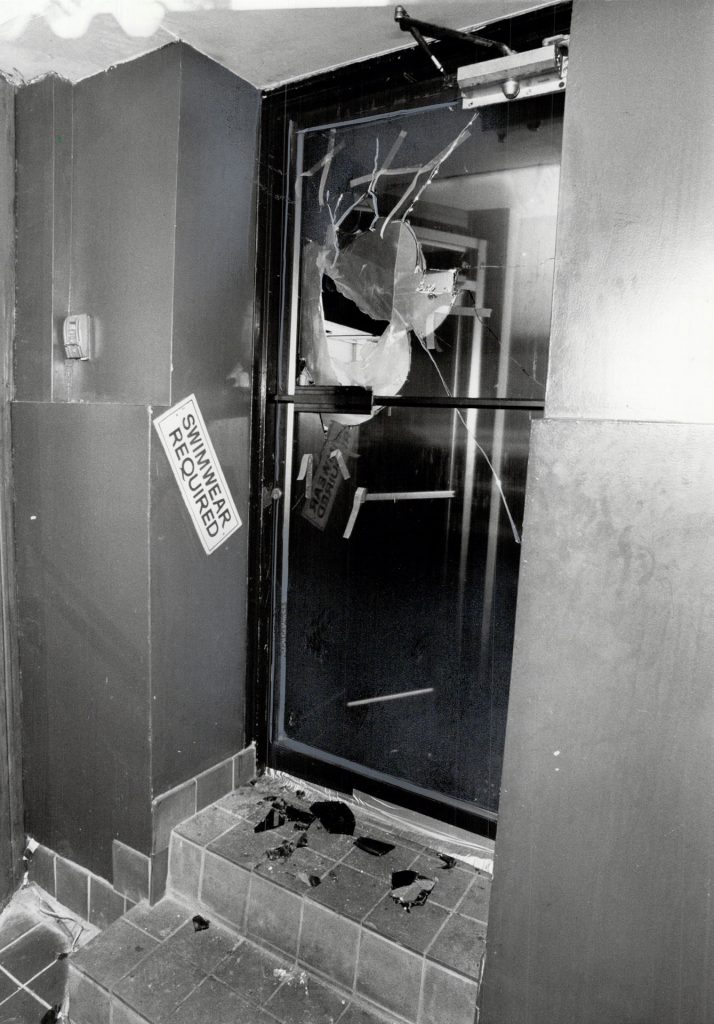 February 2021 marks the fortieth anniversary of one of the largest gay rights protests in Canadian history. On February 5, 1981, over 150 Toronto police officers raided four local bathhouses, known as gathering places for members of the gay community. Almost three hundred men were arrested that night, sparking a series of highly publicized rallies and mass protests against the raids.

This was not the first example of police raiding a bathhouse in Canada. Historian Tom Hooper has charted 38 bathhouse raids from 1968-2004 in cities like Montreal, Ottawa, Edmonton, Calgary, and Hamilton. But there is one city missing from the history books — Windsor.

In fact, Etna’s Steam Bath on 563 Brant Street in Windsor was the first gay bathhouse to be raided in Canada. In 1964, nine men from Windsor and the states of Michigan and Ohio were charged as “found-ins” (people discovered at the scene in a bawdy house) at Etna’s Steam Bath. This was not the first time that Joseph Cepaitis, the proprietor of the bathhouse, had issues with the law. Cepaitis purchased the Brant Street property in 1949, and in 1951 it was raided for illegal possession of liquor. All charges were dropped. In 1953, another property he owned on Windsor Avenue was raided and a woman was charged with keeping a disorderly house. Cepaitis himself was charged with permitting a bawdy house, although he only received a reprimand. In 1961, he was jailed for two months for selling liquor out of his house on Aylmer Avenue. The building on Brant Street was partly demolished in 1954, and the Etna’s Steam bath building opened in 1962.

By that point, Ceptaitis had a long history with the Windsor police, but the raid on April 24, 1964 was distinct from previous brushes with the law, and much more severe for him personally. Rather than escaping with a warning or reprimand, after the April 1964 raid he was charged with keeping a common bawdy house and could have been sentenced to a two-year prison term. In the end, he was given a sentence of one year in jail after changing his plea to guilty following eyewitness testimony during the trial.

Surprisingly, this raid did not rise to the level of national news and was lost to history until recently. At the time of the raid, the event only seems to have been covered by one publication, a Toronto magazine titled GAY which wrote about “a cute little item of news which seems to forebode events which might happen in the future.”[1] How true this prediction became for gay men across Canada. Tom Hooper’s research reveals that more than 1,300 men in cities across the country would be arrested under the bawdy house law.

One of the many men affected by the much more public 1981 Toronto bathhouse raid was Windsorite Jim Monk. He was the chairperson of the Coalition for Gay Rights in Ontario (CGRO) at the time, and happened to be in Toronto that night, staying with friends who worked at The Body Politic, Toronto’s gay newspaper. They heard about the raid and joined other activists who set out to offer assistance and support to those arrested. The group decided to hastily plan a protest the night following the raids. Monk would be the emcee for the planned protest speeches and would also give the marching instructions. This was something that came naturally to him.

Windsor has a long history of activists in the 2SLGBTQIA community and Monk was one of the early members of the first gay activist organization in Windsor, which started in 1972. He was part of a group who fought the Windsor Star when the paper refused to print an ad for a community dance in 1973, arguing that the ad “exploited sex and was in bad taste” — the dance was simply titled the “Gay Dance.” The newspaper lost the suit.

Monk helped struggling queers in Windsor by setting up a phone line, which could be found by looking up the word “gay” in the white pages. He even ran for school trustee to help support queer youth. While he was unsuccessful, to do so as an openly gay man in 1978 was a significant political act.  Monk also worked tirelessly with his union to help them understand the importance of negotiating for sexual orientation protections under collective agreements. He did all of this and more well before the infamous Toronto bathhouse raids in 1981. So, when the raids happened on the night of February 5th, Monk knew he had to help make positive change.

At the beginning of the protest and after the speeches, he rallied the troops by telling the protestors that “[w]e’re going to march down Yonge to Dundas, along Dundas to 52 Division. And remember this is a peaceful demonstration. There is to be no violence.” The protesters responded by shouting “March, March, March.” Monk was no stranger to conflict; he knew from years of experience that to create change you must face your adversary straight on (or “gaily forward”). The protest ended at Queen’s Park with the Metro Toronto police waiting for them outside the doors of the provincial legislature. Monk went home to Windsor the next day. But the fight in Toronto was not over. One night of protest was not enough. The movement grew larger and more organized, culminating on February 20th with over 4,000 people in attendance.

Since that historical protest in Toronto many positive changes have happened for 2SLGBTQIA people in Canada, including growing public acceptance of non-conforming sexuality, human rights protections, and the right of same sex couples to marry. In 2016 the Toronto Police Chief officially apologized for the 1981 raids, although many thought he did not go far enough.

2SLGBTQIA history is rich in Windsor, but too much of it is lost. Many of our people thrived for several decades but sadly, others did not. The impact of suicides, assaults, firings, murders, and arrests just for expressing their nonconforming sexuality or gender continue to be felt. Windsor even has the distinction of having the first recorded death penalty verdict for two men for having consensual sex in 1842. The men ended up not being executed by the state but went to prison like so many other Queer and Trans people in Windsor’s history.

The Windsor/Essex 2SLGBTQIA community is resilient. Canada’s first gay bath house raid did not stop Etna’s Steam Bath. When Cepaitis got out of jail, he continued to work at the bath house, which changed its name to Vesuvio in 1965. Under that name it became a staple social space for many gay men in Windsor, Detroit and beyond. Cepaitis died in 1982. He never married and he left many outstanding debts. In the early 1980s, under new management, Vesuvio expanded to thirty private rooms, surviving the AIDS epidemic until its closure around 2009. 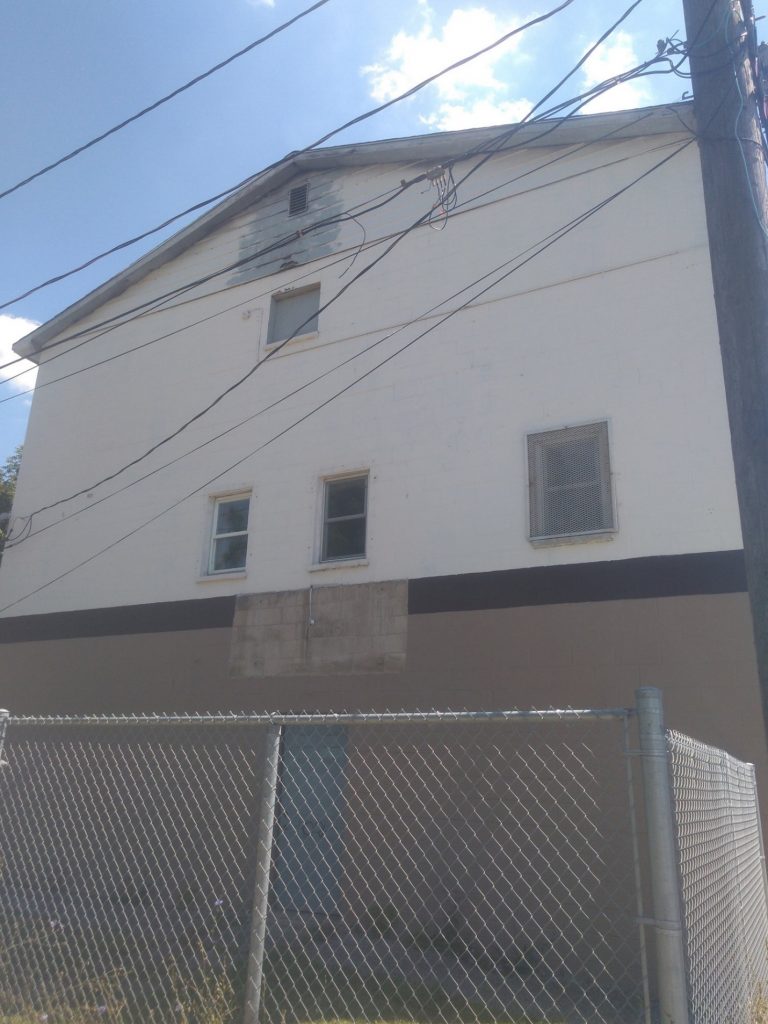 Today, however, the building that housed Vesuvio, and before it Etna’s Steam Bath, is abandoned, and damaged after catching fire in 2011. The sign is gone, and the property is enclosed with high fencing, giving it a menacing appearance. This formerly vibrant social space seems to be waiting to rot and be torn down. Unfortunately, too many 2SLGBTQIA places in Windsor have been destroyed or altered to prevent gay men from exploring their sexuality. Hopefully, this historic property will not face the same fate. Even if it is razed to the ground, its importance to Canadian history will not be forgotten again.

Walter T. Cassidy is a high school teacher at Walkerville Collegiate Institute in Windsor. He is also Chairperson of the Windsor/Essex Rainbow Alliance (WERA), a group of individuals whose goal is to institute a method of collecting, preserving, and disseminating the local history of the 2SLGBTQIA community in Windsor/Essex county. Email him at walter.cassidy@publicboard.ca