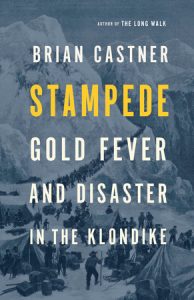 In 1897, as news that gold had been found in the Klondike spread, over 100,000 of people rushed into the region in search of fortune. Unfortunately for many of them, the press typically didn’t highlight the harsh winter conditions in the Klondike, meaning thousands arrived completely unprepared. As the population grew, the situation on the ground continued to deteriorate as violence, particularly against local Indigenous Peoples, led to lasting human and environmental damage.

Despite this, there is a romance in the popular imagination of the gold rush. There is an image of a poor prospector venturing north with nothing more than a gold pan and a dream and finding untold riches in the midst of a cartoonish environment filled with non-threatening frontier caricatures. The reality, of course, bore no resemblance to this.

That is made very clear in Brian Castner’s new book Stampede: Gold Fever and Disaster in the Klondike. Using a mix of archival and secondary sources, Castner brings the people to life. A veteran of the Iraq War who has published multiple outstanding volumes on his experiences, Castner’s ability to craft a captivating narrative is clear from the first page. Stampede reads like a novel, but is entirely based on real people and real experiences that challenge the existing mythology surrounding a remarkable moment where colonial, national, and local histories intersect.

In this episode of the History Slam, I talk with Brian about the book. We talk about how his personal background influences his writing, his research process, and how his work differs from traditional histories. We also chat about the people included in the book, the colonial ramifications in the Klondike, and the lessons the gold rush that we can use today.

One thought on “History Slam 180: Gold Fever & Disaster in the Klondike”