In the early 1970s, a one and a half story log structure was relocated from the Munsee-Delaware Nation to Ska-Nah-Doht or Longwoods Conservation Area. By this time, the building was well over one hundred and twenty years old and had provided a home for many generations of two families of the Munsee-Delaware community.

The Logan home, built in the mid-1800s, was witness to significant change in the community and to centuries old ways of being: the pressure to adapt to the realities of government policy, the surrounding settler communities and the economic development of southwestern Ontario. The oldest physical structure from the community, the building represents the strength of the Munsee people, adapting and effecting change in local, provincial, national and global environments. This post looks at the contributions of three Munsee Delaware community members who were born and raised within this building. 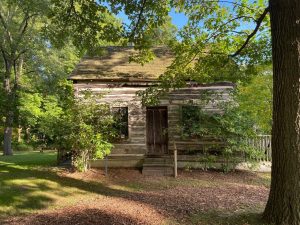 The Munsee-Delaware community is located on the Thames River, southwest of present day London, Ontario. Bordering the Munsee-Delaware community are two First Nation communities, the Chippewa of the Thames and across the river, the Oneida Nation of the Thames. At the conclusion of the American Revolution, during the early 1780s, the Munsee people came to Upper Canada and settled at Munceytown along the Thames. Two villages were established along both sides of the Thames River. Within a few years, the community was visited by land surveyors, settlers, British army officials, and missionaries. One of the few settlements in Southwestern Ontario, the villages were focal points for activities.

Members of the Munsee-Delaware community fought in the War of 1812 and the community was displaced by American invasion. After the war, the community was rebuilt, marking a change in the design and build of family homes. Increasingly, centuries old use of wihkwahms were replaced with log buildings consistent with those built by early settlers.

In the early 1830s Englishman James Beavan visited the community as part of his tour of Upper Canada, and sketched the last “Big House” building in the community, where the traditional religious ceremonies of the Munsee people occurred. The sketch below gives evidence of an architectural switch to a “cabin style.” In addition, Beavan explained that the roof had been removed to improve a community member’s home which must have looked similar. This marked a physical – “built” – indication of a change in Munsee ways. 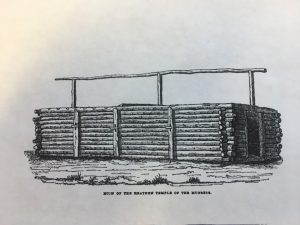 Bighouse of the Munsee people, 1846

The Logan log home was built for Henry and Sarah Logan. They were most likely of the first generation of Munsee people born in Upper Canada after the migration from Lunaapohking (present day New Jersey, New York, Pennsylvania). Their parents and extended family may have lived in the cabin, consistent with traditional family dynamics of the Munsee people. The family of Henry and Sarah included seven children, four boys and three girls (Henry, William, Jacob, Scobia, Polly, Hannah and Elizabeth).

The building is a one and a half story log structure. There is a single open living space on the main floor, with sleeping space accessed by stairs in the upper level. This home would have been witness to conversations about traditional Munsee ways of knowing, cultural and religious understandings as well as stories shared about the migration from the East coast and various conflicts with European armies. Family members would have spoken the Munsee language.

Over the years, this building would be the home of farmers, chiefs, translators, activists, soldiers and railway engineers. Despite what could be viewed as an isolated building in a small Indigenous community, this home was witness to a family that was very much an active part in the major events, settler politics and global events of the 19th and 20th century.

Born in 1845, Jacob Logan lived most of his life in the Munsee-Delaware community. He was a farmer and did other work for the community, repairing buildings and machinery. Jacob was a translator for the community as related in an interview with the London Free Press. According to the newspaper, he would travel yearly with community men who fought in the war of 1812 to the Grigg Hotel in London to receive their gratuity. Jacob would translate on their behalf indicating that he was fluent in the Munsee and English language.

Family story, related through generations, shared the death of Tecumseh. Those who heard the story from Jacob would only tell parts of the story without explaining where the great chief was buried. According to Jacob, as a young boy, he overheard men who had come to visit and talk about the battle of the Thames. One man, Jacob Pheasant, related being close to Tecumseh during the Battle of the Thames and told of how Tecumseh died and where he was buried after the battle.

Jacob shared his story with government officials in the early 1930s. Not waiting for a response, he also shared the story with a reporter from the London Free Press. Jacob followed up the interview by showing various officials where he believed the grave was located, near the Delaware Nation at Moraviantown.

Scobia Logan, Jacob’s younger brother, also called this building home for most of his life. He had many different roles in the community including chief and school teacher. Scobia was involved in the politics of the Munsee-Delaware community. He also participated in Indigenous politics on a provincial and national level. Scobia may have been the only sibling of the family to attend residential school (Mohawk Institute). 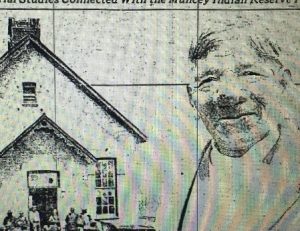 In 1885, Scobia, along with another community member, Charles Halfmoon, undertook a journey to discuss Munsee land claims with the British government. This trip to London, England by way of Philadelphia is remarkable when mobility of Indigenous peoples was increasingly restricted by the Canadian government. While it is not certain if Scobia had the desired audience with Queen Victoria, he did present a tomahawk to British government officials. In addition, he travelled to different locations around England, sharing Munsee dress and perspectives, no doubt raising money to support the Munsee cause.

Born in this house in 1896 to Scobia and Isabelle Logan, Arnold Logan was the youngest of four children. After attending residential school at the Mt Elgin Institute, he worked as a fireman on the Pere Marquette railway out of St Thomas, Ontario. In August 1914, Arnold enlisted in the Canadian Expeditionary Force. Assigned to the the 1st Battalion (Western Ontario), upon medical examination at Valcartier, he was described as the “perfect man.” Arnold would take part in battles at Langemarck, Givenchy, ultimately losing his life at Hooge near Ypres in April 1916. 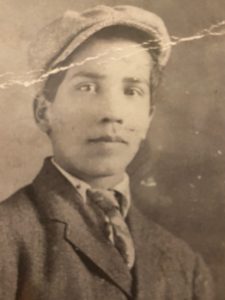 Arnold’s service in the Canadian Expeditionary Force was remarkable for many reasons. He was one of the first Indigenous people to volunteer for service in World War One. In 1914, the Canadian army did not actively “allow” Indigenous people to enlist. Arnold was a member of the “1st machine gun section” for the battalion. This would indicate that he was given additional training to operate a fairly new technology. Apparently very well-liked by fellow railway employees and soldiers, Arnold’s wartime service was honoured through a statue that graces the family tombstone at Munsee Delaware in addition to his stone in Belgium. 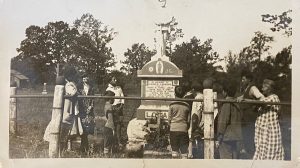 There are three log homes located in Longwoods Conservation Area, one from each of the three Indigenous communities on the Thames River. The homes are located well off Highway 2, deep within the forest. While the physical history remains, often the lives and actions of the people who lived within the homes is forgotten over time.

The three members of the Logan family demonstrated a resistance to compliance with government policy and expectations of Indigenous peoples in the nineteenth and twentieth centuries. Sharing story with a settler audience, petitioning the British monarch and government on treaty rights and enlistment in the Canadian army were not expected actions of Munsee people and Indigenous peoples as a whole. The leadership, persistence and determination of Jacob, Scobia and Arnold Logan is celebrated through historical record as well as through family and community story.

Ian McCallum is a PhD student studying revitalization and the Munsee language at the Ontario Institute for Studies in Education at the University of Toronto.

On February 1 at 6 p.m. you are welcome to join Ian and Karen Mosko as they share stories from their community in both the Munsee and English languages: https://bit.ly/3lAqB0c 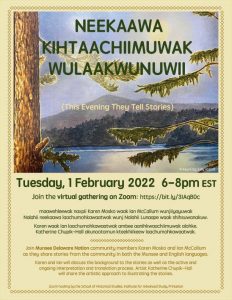 Beavan, James Recreations of a long vacation, or, A visit to the Indian missions in Upper Canada 1846