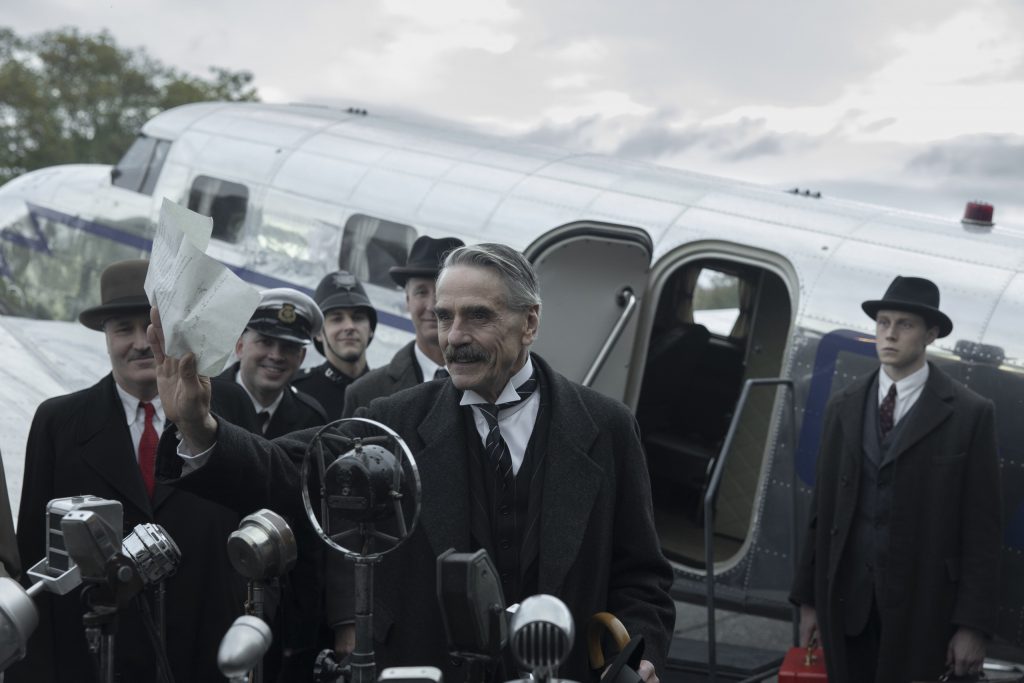 When people desire a more bellicose response to an international conflict, they often accuse their opponents of failing to recognize the lessons of “Munich.” We are hearing that from some Canadian conservatives with regards to Canada’s response to the threat of a Russian invasion of Ukraine. The assumption in their use of “Munich” is that the leaders of Britain and France “appeased” Hitler in September 1938 by approving his plan to seize the Sudetenland region of Czechoslovakia and ignoring his earlier seizure of Austria. But that assumes that the men negotiating with Hitler in Munich despised his goals but caved to preserve an impossible peace. In fact, there is evidence that British Prime Minister Neville Chamberlain and his government supported Hitler’s goal of conquering central and Eastern Europe and then invading the Soviet Union, provided that he left western European nations and their colonies alone. The new Netflix movie Munich: The Edge of War, like much of the historical work on the event and on Chamberlain, ignores that possibility.

The movie, based on a popular novel by Robert Harris, gets some things right. It introduces a network of influential Germans conspiring to overthrow Hitler and their failed efforts to win British government support. It shows Chamberlain telling Britons that Czechoslovakia was not worth fighting over before he’d even gone to Munich, though it somewhat muffles the defeatist words of his radio address. It suggests that Chamberlain believed that Hitler would not stop his territorial conquests with Austria and Czechoslovakia’s Sudetenland, both conceded at Munich.

The rest is apologetics. Chamberlain is presented as a near-pacifist who finds the prospect of war appalling and who is convinced that the British people, exhausted from World War I, need to see more betrayal by Germany and more rearmament by Britain before agreeing to another war. Beyond negotiating the Munich Pact, he demands a personal meeting with Hitler to obtain the famous piece of paper in which the two countries agree not just to “peace in our time” but to eternal peace. He argues naively that Hitler’s signature will reveal him to the British people as treacherous if he seizes more territory.

Plentiful evidence demonstrates that Chamberlain, who had expressed enthusiasm for the Nazis’ destruction of communism, socialism, and unions in Germany, was not opposed to substantial Nazi expansionism. He met twice with Hitler in the two weeks before Munich. The first get-together was in Berchtesgaden, and minutes of the British Cabinet meeting of May 3, 1939 record Chamberlain revealing that Hitler asked for a “free hand” in Eastern Europe. A week later at Godesberg, Hitler said to Chamberlain: “we will not stand in the way of your pursuit of your non-European interests and you may without harm let us have a free hand on the European continent in central and south-east Europe.” So wrote Dr. Paul Schmidt, Hitler’s chief translator and a member of the underground resistance to Hitler, though you wouldn’t know that from his cameo appearances by Hitler’s side in the movie. According to Schmidt, Chamberlain appeared pleased with Hitler’s assurances.

Schmidt viewed Chamberlain and his entourage as mesmerized by Hitler’s promise to invade the Soviet Union and destroy communism. Winston Churchill and the permanent secretary of Foreign Affairs Robert Vansittart feared that was true of both Chamberlain and his Foreign Secretary Lord Halifax. There is evidence in the papers of Chamberlain and Halifax to support those fears. Public opinion on appeasement was mixed, with both the British Labour Party and the Liberal Party opposed. So the movie’s suggestion that Chamberlain was operating in the context of a country overwhelmed by pacifist feelings is an overstatement.

The movie’s pacifist Neville Chamberlain sits uncomfortably with the politician in charge of Britain’s global empire that ruled colonial populations with ruthless force. Suggestions that Chamberlain simply sought more time for Britain to rearm, now a staple of Chamberlain’s defenders, seem odd considering that Britain had overwhelming military might in 1933 to prevent Hitler’s massive rearmament in violation of the Versailles Treaty. Britain’s own slow rearmament suggested little concern for the speedy German rearming, though critics like Churchill were vocal from the start about the need to contain the Nazis. Only evidence from the Secret Service in 1939 that Hitler would likely not stop with eastern European conquests produced a reluctant change in Chamberlain’s thinking, though he managed to minimize the importance of Hitler’s seizure of the rest of Czechoslovakia in March of 1939. Those Secret Service reports, like Foreign Office documents, spoke of a conflict between “moderate” and “extremist” Nazis, the former being those content to seize all of central and Eastern Europe and invade the USSR, the latter being those who were convinced that the Western democracies would not resist the temptation to attack Germany while it had its troops bogged down in the East.

Even after Chamberlain declared war on Germany on September 1, 1939, he pointedly did very little to punish Hitler for the dismantlement of Poland, the nominal cause of World War II. During the phony war, he and Lord Halifax attempted to persuade the German military to abandon Hitler and create a German-Anglo alliance to make war on the Soviets for seizing control of Finland. Halifax wrote the introduction to the book, The British Case, by Lord Lloyd of Dolobran, a Cabinet member, which extolled the fascist regimes in Spain and Portugal and justified Hitler’s seizure of Austria and Sudetenland. The book argued that it was Hitler’s signing of the German-Soviet pact that made him an outlaw to “a common European interest” to prevent “World Revolution.”

The main thrust of the film is an invented cinematic effort in Munich by German opponents of Hitler to get a document that proves Hitler’s massive expansionist objectives in the hands of Chamberlain. That holds the film together. But it is also ludicrous, because Hitler revealed his monstrous goals in Mein Kampf ten years before coming to power.

We’ve long known that admiration for Hitler among corporate and aristocratic elites in the United Kingdom, the United States, Canada, and France was hardly insignificant. In Canada, that even included Prime Minister Mackenzie King. The RCMP was so busy during the 1930s tracking down the activities of Communists that it barely observed the activities of Nazis and other fascists, and when it did, was often supportive. But there has been reticence to explore whether elected Western governments gave succor to Hitler while leaving unanswered the questions of why they let him get away first with rearmament forbidden by Versailles, his 1936 march into the Rhine, and his military support for the fascists who overthrew the elected government of Spain in 1936, not to mention his violent overthrow of democracy and ethnic tolerance in his own country. The claim that it was all about preventing a second world war, as suggested above, seems absurd when examined closely.

It has become all too comfortable to treat Hitler’s genocide against Jews, the Roma, homosexuals, and the disabled as a set of events produced by a single-minded monster with no connection to the larger history of European colonial conquests and racism. Pretending that pacifists ruled the democracies who had subjugated much of the world avoids questioning what they were actually doing as Hitler rearmed. The collaboration by elected governments with Hitler, if only by letting him rearm and carry out conquests as long as they were restricted to a particular region and to the claimed goal of eliminating communism, does not in any way mitigate the blame that attaches to the Nazis for their atrocities. But it does cause us to think more closely about why Hitler was attractive to elites in other countries and what it might say in terms of how foreign policy operates away from the headlines right up to the present day.