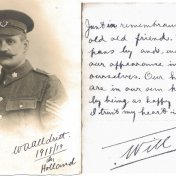 Robert Alldritt Following the end of the First World War, representatives of the Allied and Associated nations agreed that a medal, which would be officially known as the “Interallied Victory Medal,” would be awarded in commemoration of victory over Germany[i].  In all, approximately fourteen million bronze medals suspended by distinctive double-rainbow ribbons symbolizing “calm after a storm” were distributed; their… Read more »

By Sarah Glassford Can toilet paper have archival value? Within the eclectic collections that comprise MC300 (York-Sunbury Historical Society) at the Provincial Archives of New Brunswick, we find just such an artifact. (I hesitate to call it a “document” although it is, in fact, ink on paper.) It is tantalizingly described in the finding aid as “#21 ‘Do Your Bit’… Read more »

By Elliot Hanowski Did the horrors of the Great War cause Canadian soldiers to lose their faith? Or is it true that there were no atheists in the trenches? The war has generally been seen as a powerfully disillusioning experience. Books such as Paul Fussell’s widely influential The Great War and Modern Memory portray the war as the origins of… Read more »

By Andrew Nurse One of the great innovations of the now aging “New Social History” (NSH) was its commitment to uncovering a past about which people knew little. The NSH focused on what we might, in a non-pejorative way, call the broad mass of people: workers, slaves, peasants, First Nations, women, among others whose names appeared at best briefly in… Read more »

http://activehistory.ca/wp-content/uploads/2013/09/Sabine-Wieber.mp3Podcast: Play in new window | DownloadBy Sean Graham As the summer comes to an end, my reading list has recently included Mitch Albom’s Tuesdays with Morrie and Will Schwalbe’s The End of Your Life Book Club while this PBS Frontline episode on facing death has found its way into my viewing schedule (all of which I would highly recommend)…. Read more »

The development of service clubs in Canada and the current decline of membership in these once vibrant community organizations.

The ActiveHistory.ca committee is pleased to announce that we are actively soliciting papers in all areas of historical inquiry, including but not limited to several specific targeted areas. We are looking for short papers on important historical topics that might be of interest to policy makers, the media or the general public. Papers (approximately 2,000 – 4,000 words in length)… Read more »