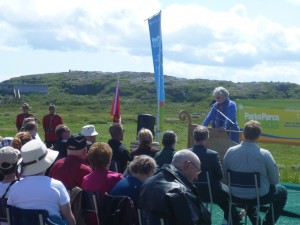 Benedicte Ingstad at the 50th Anniversary Ceremony (Photo by Author)

The main story of L’Anse aux Meadows occurred 1000 years ago, when Leifr Eiriksson (or some other intrepid Norse explorer) and his crew journeyed across the North Atlantic and landed on the shores of North America. It is this story that continues to bring in national and international visitors by the thousand, and it is this story that Newfoundland and Labrador Tourism continues to present to a watching world.

But there is another prominent story at L’Anse aux Meadows, one that is tied to the 1000 year old tale, but which happened in living memory and which continues to shape the lives of the people of the Northern Peninsula. On Wednesday July the 21st, 2010 L’Anse aux Meadows National Historic Site celebrated the 50th anniversary of the discovery of the Norse archaeological site.

In 1960 Helge Ingstad, a Norwegian explorer and writer, arrived by boat to the community of L’Anse aux Meadows asking about Norse/Viking remains. From there a local man by the name of George Decker led Ingstad to the remnants of some old sod buildings. The rest is history. 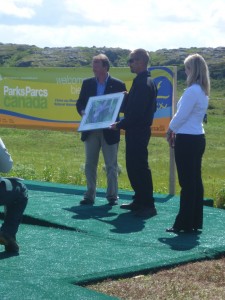 Alan Latourelle (left) presenting art to Wade Decker (centre). Standing to the right is Kari Hoel of the Norwegian Embassy. (Photo by Author)

On the morning of July 21st the CBC came early to L’Anse aux Meadows to interview some of the important characters, including locals, like Clayton Claybourne, who had been here since the beginning in 1960, members of the Decker family, L’Anse aux Meadows resident story-teller Michael Sexton, Parks Canada archaeologist in charge of the site at L’Anse aux Meadows Birgitta Wallace and Benedicte Ingstad, daughter of Helge and Anne Stine Ingstad.

Parks Canada extended a hand to the community and held a breakfast on the wharf while CBC was conducting their interviews. At 1:30 Wade Decker, grandson of George Decker and Parks Canada employee, and Marit Ingstad Sandberg, granddaughter of the Ingstads, led a procession up from the wharf to the site at L’Anse aux Meadows, much in the same way that George would have led Helge in 1960. Alan LaTourelle, CEO of Parks Canada, and Kari Hoel, First Secretary of the Norwegian Embassy, both attended the ceremony as well. There were speeches and traditional Newfoundland performances and cake. 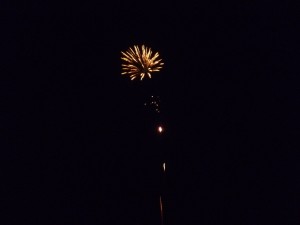 Fireworks on site at L’Anse aux Meadows. (Photo by Author)

Later that evening a reception was held, and a few of the presenters there were from members of the original archaeological team. Instead of talking about the sagas, or the implications of their finds or work, largely they showed pictures they had taken of the community when they were here in the 60s and 70s, and talked about what it was like to do the archaeology and how it felt to make a find. Their audience was the community that live here and who knew most of the people in the photos, and there was general recognition that scholarly discussions of archaeological or historical theory would not reflect what was being celebrated that day. In the evening festivities were capped off by a bonfire and fireworks. 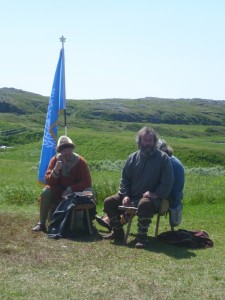 To a distant public it is a history that is perhaps slightly less interesting, though just as important, as the millennia old story of Viking explorers. After all, without the discovery we would not know how Newfoundland fits into that epic tale. Yet for visitors who see the landscape around L’Anse aux Meadows, the story of the site’s discovery and the subsequent archaeology is found to be just as gripping a tale of humanity. And for locals, and for everyone who has been involved at L’Anse aux Meadows over the years Wednesday was not just a day to celebrate history, but a day to celebrate their own history.

Megan Arnott is a Masters student with the University of Western Ontario’s Public History program. She is currently on a Public History Internship with L’Anse aux Meadows.