On Friday night I sat down at my computer to write out a post for this morning and nothing came.  Last week was a busy week for me and it was filled with a number of surprises (some pleasant, some less so).  One of the major events of the week was the death of my friend Francis. 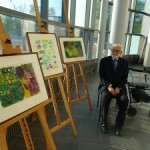 Over the past five years I have spent many Friday afternoons with Francis and the Club at L’Arche Daybreak in Richmond Hill.  Daybreak is a community that focuses on sharing life with people with different gifts and abilities; at its heart are men and women with intellectual disabilities.  On Friday afternoons at the Club, a program for retirees, we often gather around the television screen to look at old community photographs.  The members of the Club tell me stories about their past experiences, and I annotate the images in a digital database with the names of the people in the picture and the stories associated with them.

In the early days, we only planned to include a handful of people in this project.  Our intention was to keep the group and the stories manageable.  But as soon as we gathered for our first session, Francis wanted to join.  With over eight decades under his belt, we welcomed his enthusiasm and interest.  Francis had stories of playing sports and working in the town where he grew up before he came to live at Daybreak, as well as many memories of the nearly four decades he lived in the community.

As a historian whose principal focus is finishing a dissertation on Aboriginal experiences of the British Conquest of New France in the 18th century, I cherish these afternoons of simple sharing and story-telling.  There is no need for detailed notes, no theoretical frameworks and no deadlines; only stories of old friends, happy and sad memories, and the odd hair-raising adventure.

Often as we moved through the pictures, Francis would stop us, saying “Hey!  That’s me!” and then proceed to tell us a story about his friend Andy, who moved to Bracebridge, or his bowling league, delivering meals on wheels, or growing up with his family.  Through his stories I learned about the history of Daybreak, many of the characters who have lived there (and there are some characters), and what it was like to grow up in the 20th century with an intellectual disability.

But these are not the most important things that Francis and the Club have taught me as a historian.  Through my experiences with Francis I have come to discover the important place that the past plays in the lives of individuals and communities.  Francis was not a man of letters and literature and initially it was not apparent that this project would appeal to him.  But I soon discovered that he had a clear sense of the past and where he fit into it.  His stories, and those he told about his friends, family, and communities, have taught me much about the history of 20th-century Ontario and what it means to be a historian.

When I compare my daily work on my dissertation with these bi-weekly visits to the Club, I can’t help but feel that there is a disconnection between the two.  In one, I spend most of my time drawing together, sorting and evaluating textual documents; in the other, I learn and record the oral stories and values held by the elders at L’Arche Daybreak.  Reflecting on this difference reminds me about the way that the work of historians shapes and engages with these stories and values, and the importance of understanding how they influence people and communities living today.

Slowly over the past five years, knowing Francis has shaped how I approach the past and how I conduct my research.  He helped me to become more attentive to the stories that people tell, more open to hearing stories from people from a broad range of backgrounds and abilities, and the importance of open-ended story-telling to the historian’s craft.  I learned a lot from him and he will be sadly missed at our gatherings on Friday afternoons.

2 thoughts on “Remembering Francis: Sharing life and sharing the past”