This is the first in a series of posts for the upcoming temporary exhibit about Chinese restaurants in Alberta opening at the Royal Alberta Museum in April 2013.  Over the final months of planning and mounting the exhibit this series will give a glimpse into what goes into creating a museum exhibit as well as share some of the stories that are too long for an exhibition. 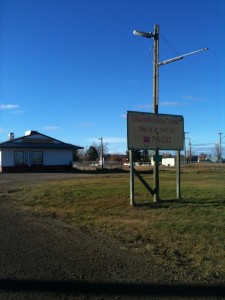 Chinese restaurants: Every town on the prairies seems to have one.

This may seem like a vast generalization about the rural west and the proliferation of Chinese cuisine in Canada, but anyone from rural Alberta will tell you there is more than a grain of truth to it.

There seems to be no rhyme or reason for the only restaurant in a town of 100 people to be owned and operated by a Chinese family, but it is here that you will find a rich history in towns dotting the prairies.  Should you visit one of these Chinese restaurants expecting the flavours of an urban Chinatown you will likely be disappointed.  Historically, in the rural west what makes the restaurant Chinese is the ethnicity of the owner.  Until the 1970s the menus featured standard ‘meat and potatoes’ fare, now menu at these restaurants is  half Canadian food – all-day breakfast, hamburgers, cream pies – and half westernized Chinese food – chop suey, chicken balls, ginger fried beef, sweet and sour pork.  This mixture of cuisines is symbolic of the overall evolution of Chinese restaurants on the prairies and the way these spaces allowed Chinese immigrants to carve a profitable niche in often hostile conditions of early twentieth century Canada.

Chinese restaurants came to populate the main streets of prairie towns through a combination of forces and factors that are unique to Chinese immigration to Canada.  Chinese men arrived as a cheap source of labour for the physically tough work of pushing the Canadian Pacific railway through the Rocky Mountains.  When that work finished, those who stayed in Canada sought work in the few avenues open to them.  In cities – like Vancouver and Calgary – stiff competition often existed for the jobs mainstream society had deemed acceptable for Chinese men.  The best chances of economic success was to own your own business.  Chinese men in Canada sent most of the money they earned to their family still in China or they saved to pay the head tax to bring brothers, sons, or nephews to Canada.

A restaurant was one of the more profitable businesses for a Chinese man, especially in a small town.  Owners were able to provide work for other Chinese immigrants as the kitchens suited those who did not speak English, while those who had picked up the new language could work the front counter.  Restaurants often became the centre of family’s migration to Canada; someone would start the restaurant and save money for the first few years to afford to bring over a son or brother or nephew; slowly more men from the extended family would immigrate and through their work the family still in China would prosper until the men in Canada decided to return to China permanently to live out the remainder of their lives with their wives and children.  After the repeal of the 1923 Chinese Immigration Act (also known as the Chinese Exclusion Act) in 1947 and the implementation of the points-based immigration system in 1967, it became easier for Chinese men to bring their wives and children to Canada.

Most of the Chinese restaurants did not last very long. For instance, Medicine Hat has seen 53 restaurants since 1900, lasting anywhere from one year, like the N.W. Lee restaurant from 1900-1901, to 69 years, like the City Café with 11 owners between 1917 and 1986.  The restaurants that last for decades in a community often come to hold a special place in the identity and memory of the town.  This is partly because they served a purpose beyond offering food.  The restaurant in Milo, Alberta served as the local bus stop; the Skylark Café in Millet, Alberta doubled as the dispatch for the local fire department; Bing’s #1 in Stony Plain, Alberta provided impromptu babysitting services after school; and Joe Mah’s restaurant in Elk Point, Alberta was also the post office.  So important to the community was the Chinese restaurant in Bently, Alberta that when the family running it retired, the town purchased the building and found a family from China to come to the town and take over the lease.

Rural Chinese restaurants are symbolic of the interactions and mixing of cultures that is central to Canadian multiculturalism.  Few of the Chinese men who went into the restaurant business had previous experience cooking, and if they did it was not in the type of food that white settlers of the prairies wanted to eat.  The ethnicity of a restaurant’s owner — not the cuisine served — led to the label “Chinese Restaurant” until well into the 1950s in cities and the 1970s in rural areas.  The menu was decidedly western because that is what the residents wanted and this base has remained in many of the rural restaurants.

Lauren Wheeler is a public historian working at the Royal Alberta Museum as a project assistant on the “Chop Suey on the Prairies” exhibition opening April 2013.

2 thoughts on “Chop Suey on the Prairies”