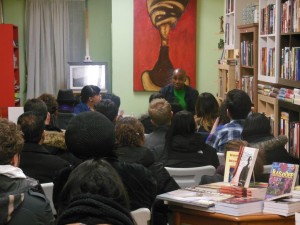 Dalton Higgins, speaking to the audience at Accents on Eglinton.

On December 8, 2012, Accents on Eglinton, a community bookstore that specializes in publications on Africa and its diasporas, along with host Francesca D’Amico (PhD candidate in music history at York University), hosted an evening with Dalton Higgins, award-winning journalist, radio and TV broadcaster, to discuss his latest book Far From Over: The Music and Life of Drake (ECW Press).

Far From Over is the first biography to trace the rise of platinum-selling Hip Hop emcee, songwriter and actor, Aubrey Drake Graham (who records under the mononym Drake). Higgins’ publication outlines Drake’s early years in the wealthy neighbourhood of Forest Hill in Toronto, his initial entry into the Canadian popular culture industry as Jimmy Brooks on the hit show Degrassi: The Next Generation, and finally his transition into the Canadian and later American urban music market. By eloquently detailing the social and cultural conditions in Toronto that helped create what Higgins has termed the “Drake Phenomenon,” the author has provided readers with a platform by which to understand and discuss the nature of Canada’s culture industry, as well as issues of identity, multiculturalism and belonging in a changing nation. 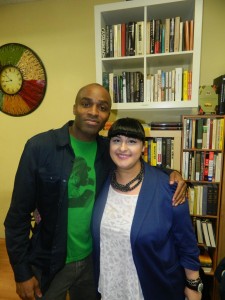 Over the course of the evening, Higgins and D’Amico engaged in a conversation that intended to use the life and music of Drake as a lens by which to discuss broader issues such as: the history of urban music in Toronto in particular and Canada at large; class and authenticity in urban music; race, ethnicity, identity and notions of multiculturalism and acceptance in Canada; the role of media and industry; Canada’s music industry infrastructure; the changing nature of music and technology; and the current state of Canadian urban music in a global market.

Click here to listen to a podcast of the discussion and click here for a direct link to ECW Press’ purchase page for Far From Over: The Music and Life of Drake.