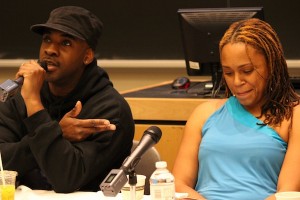 In 1991, Toronto rapper Maestro reminded Canadians that, “we live in this place with racism called C-A-N-A-D-A. I’m watching it decay everyday. We got to hurdle the system, cause hate penetrates multiculturalism.”[1] Referencing the 1990 Oka Crisis, Maestro’s lyrics suggested that Canada’s language of tolerance of diversity was hypocritical and reflected an unequal treatment of racialized people. Over the course of Hip Hop’s history in Canada, practitioners like Maestro have used the culture to re-imagine Canadian history, confront their own sense of exclusion, create a narrative of belonging to the Canadian state, and problematize the state project of multiculturalism. On June 1st 2013, Performing Diaspora, a flagship project of the Harriet Tubman Institute for Research on the Global Migrations of African Peoples, explored Canadian Hip Hop’s engagement with the Canadian narrative in a one-day public history conference at York University.

Performing Diaspora 2013: The History of Urban Music in Toronto, a landmark academic conference and act of community engagement, brought together the work of budding Canadian Hip Hop scholars, legendary African Canadian Hip Hop artists (Maestro, Michie Mee, Dan-e-o, Motion & Minbender), music producers (Chris Jackson), radio and television personalities (DJ Mel Boogie, DJ X, Master T), journalists (Dalton Higgins & Del Cowie) and fans. The conference was intended to highlight the histories and developments of Hip Hop in Canada, problematize the term ‘Urban Music’ as a discourse that homogenizes and ghettoizes black Canadian music, and discuss the challenges posed by the Canadian Music industry and how it has envisioned, and at times problematically failed to imagine and incorporate Hip Hop as part of its broader popular culture. 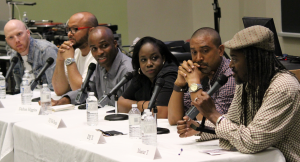 Over the course of the conference, participants used Canadian Hip Hop as a site to discuss issues of race, class, gender, sexuality, the body, urban development, concepts of immigration, discrimination and multiculturalism, and notions of national and local citizenship. The conference also aimed to use Canadian Hip Hop in order to discuss how practitioners, participants and cultural critics have used the culture as a site to destabilize, contest, negotiate and expose the shortcomings and falsehoods of multiculturalism and Canadian realities. Perhaps most importantly, participants engaged in a discussion of “performing blackness” across the diaspora, and the politics of creating, sustaining and performing music that represents people of African descent in Toronto.

Performing Diaspora 2013 was in part an attempt to illuminate the history of Hip Hop in Toronto; an incredibly unique, rich and multifaceted narrative that has yet to be fully collected, documented and disseminated. Toronto Hip Hop (and Canadian Hip Hop more broadly) has been largely overshadowed by the dominant narrative of American Hip Hop. As such, in uncovering the stories of our practitioners, the conference highlighted Hip Hop culture’s most enduring legacy: its ability to speak of the environment it sees before it, to speak to a diverse audience and to speak back to the societal structures of domination present in the lives of everyday people.

In Canada, all of the ways in which Hip Hop speaks of, to and back are uniquely Canadian. What Canadian Hip Hop has long offered to its listeners is a needed critique that exposes Canada’s real histories, its social relations and interactions and the racialized code that produces Canada as a “white nation.” This year’s conference demonstrated that Hip Hop practitioners have, and continue to, use the culture to articulate their visibility in a nation that often silences their communities and contributions, claim the space and ability to speak, and privilege their voices as valuable. In doing so, Hip Hop has, and continues to, act as a site to help destabilize our ideas about Canada by including those who often are forgotten, excluded or erased from Canada’s history and its present.

Given that Performing Diaspora 2013 was in part an attempt to promote research and share Toronto Hip Hop’s story, the conference has been recorded (links to each of the six sessions can be found here), and will be transcribed in an effort to collect the oral histories of the day’s participants and create a record of the diverse experiences under examination. In addition, the academic papers presented will also be published in a Performing Diaspora publication of working papers, to be available in the near future.

One thought on “Remixing the Canadian Narrative: Hip Hop as Public History”