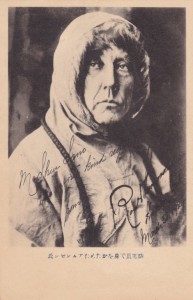 I recently completed The Blinding Sea, a 52-minute high-definition historical film about the most successful polar explorer of all time, Roald Amundsen (1872-1928). He was first through the Northwest Passage, first to the South Pole, second eastbound through the Northeast Passage and first confirmed to have reached the North Pole.

This was no armchair exercise for me. As a historian, I found that making a film destined for schools, universities and museums was like starting completely from scratch. 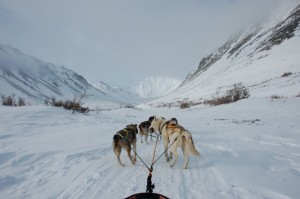 Dog-sledding photo I took in Kluane Park. Amundsen owed his conquest of the South Pole to dog-sledding techniques he learned from Inuit.

I had to learn how to use a high-definition video camera and record sound properly. Story-telling in films depends on strong visuals. I had to shoot on location, whether on board an icebreaker wintering in the Beaufort Sea, on a three-masted bark sailing across the Southern Ocean to Antarctica, by dog-team in Gjoa Haven (Nunavut), Kluane National Park (Yukon) and in Nome (Alaska), on horseback in the Sierra Madre mountains of Mexico, or by ferry and on foot in Oslo and Oppegård, Norway…

In action scenes full of moving people and animals, I had to hold the camera steady, although I was also moving – and shivering – myself.  Sometimes the wind chill shot down to -54°C, at which point the camera – and my hands – froze.

Many exploration films portray “the great white hero” in the frozen wastes – the bold adventurer against a backdrop of faceless natives. Some people take the “hero angle” to extremes. One Norwegian polar scholar even assured me (off-camera) that Amundsen would have been a military genius – another Napoleon – if only he had lived in a more important country … than Norway! 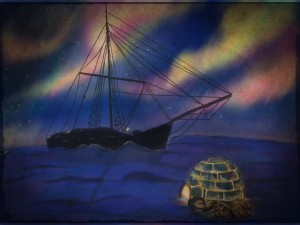 An illustration for the film by my daughter Iona Fournier-Tombs – it illustrates the intercultural message, since an igloo is set up next to Amundsen’s polar ship Gjoa.

In my film, I focus on the human element, exploring the relationships Amundsen developed with Aboriginal people in the polar regions, and how the “knowledge partnerships” he built with them helped him achieve success. I show Amundsen as a humble, flesh-and-blood person, interacting with other people, experiencing life’s joys and sorrows.

Too many historical films rely on experts describing things. I worked hard to find people directly related to the story – even three generations later. I had to develop relationships of my own, in filming members of Amundsen’s Norwegian family, Inuit whose traditions hold they are descended from him, and his Siberian Chukchi granddaughter by adoption.

In film-making, it is not enough simply to “be there.” Let me explain.

Drafting a newspaper article or a non-fiction book is one thing. For example, in writing Robber Baron: Lord Black of Crossharbour (2007), an unauthorized biography of Conrad Black, I took notes, looked up references, consulted databases, exchanged correspondence, conducted interviews with Mr. Black and 300 other people connected to his story, attended his 2007 criminal trial in Chicago, used imaginative literary techniques to recreate scenes, and had a libel lawyer go over everything very, very carefully…

Writing for radio is something else again. In two decades doing radio documentaries and stories for CBC, Radio-Canada, BBC and National Public Radio, I created “word pictures” with sound, to evoke the Arctic, Patagonia, the Guianese Highlands and the Sahara…

In teaching History, Creative Non-Fiction and other subjects for seven years in a university setting, I found that developing and delivering university courses was like a wonderful running conversation. Integrating visuals into my courses – in order to illustrate values and ideas – actually nudged me in the direction of film-making…

But making a documentary is something else again. How does a film-maker record meaningful exchanges without intruding; how does he or she respect people’s intentions, encourage them to open up and reveal interesting details on camera, while making them feel perfectly comfortable and natural … in front of a softly purring metal-and-glass camera? How does a film-maker validate what he or she is learning as things move along, while keeping things in context, and acknowledging that people of different cultures have different ways not only of doing things but also of representing their experience?

Once the editing phase starts, how does a film-maker “pull it all together”? Winnowing 50 hours of footage down to 52 minutes reminded me what it felt like when I was finishing my PhD in History at McGill University – as if someone had taken a huge pot of overcooked spaghetti and had emptied it onto the floor, and my task was to spend a year identifying and ordering each strand of spaghetti. The editing phase also involved composing music, acquiring some archival images from the Norwegian National Library and other sources, and getting Earth Observation satellite images from NASA as well as the Canadian and European Space Agencies…

And in film-making, there is always the question of when the editing “is over”: my editor had to make “last-minute” touches to my Final Cut Pro files – more than a few times! 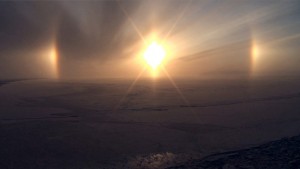 Photo taken on board the Canadian research icebreaker Amundsen, wintering in the Beaufort Sea.

As I reach out to new audiences with The Blinding Sea (the French version is called Éblouis par la mer), I am struck by their reactions. Whether audiences so far are Norwegian, southern Canadian, Inuit or Chukchi, they seem to recognize themselves in the film, and they discover new things they didn’t know before. History can be compelling, rigorous and truthful. My hope is to do more inter-cultural historical films, along these lines.

George Tombs is a Montreal-based artist-historian working in English and French. His experience as a journalist, biographer and university professor has led him to produce and direct his first film, The Blinding Sea, set in Antarctica and the Arctic (click here for a link to the film trailer). George can be reached via his website at: http://www.evidentia.net/contact/