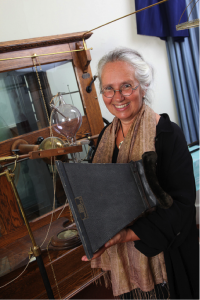 Dr. Jacalyn Duffin began her career in medicine, practicing hematology in Ontario.  A move to France, though, prompted Duffin to pursue a Ph.D. in history and, since her return to Canada more than two decades ago, she has balanced a career as a historian and practicing physician.  As the Hannah Chair in the History of Medicine at Queen’s University, Duffin shares her unique perspective with the students and faculty of Queen’s medical school.

The University of Saskatchewan was pleased to welcome Dr. Duffin as a keynote speaker for the conference, “Connections and Communities in Health and Medicine: Society for the Social History of Medicine (SSHM) and Manitoba-Ontario-Minnesota-Saskatchewan (MOMS) History of Medicine Conference,” September 12-14, 2013.  In this talk, Duffin examines the guiding principles of competency-based medical education (CBME) in Canadian medical schools and the CanMEDS Physician Competency Framework.  More specifically, she examines her role as a historian working within the CanMEDS Framework and argues the importance of historical learning to inform, not one, but each of the seven roles in which Canadian physicians are to be trained: Medical Expert, Communicator, Collaborator, Manager, Health Advocate, Scholar, and Professional.  To illustrate the importance of history within medical education, Duffin draws on her vast body of research and discusses whether quotas existed to control the acceptance of women and Jews into medical school, the historical context in which medical tuition and physician salaries have evolved, and, finally, some of the factors contributing to and the consequences resulting from the generic drug shortage that exists in Canada and around the world. Fans of White Coat, Black Art, on CBC Radio 1 will of heard a special program focused on Dr. Duffin’s research into drug shortages this past weekend: The Drug Shortage: An Encore and Update.

“The CanMEDS Physician Competency Framework describes the knowledge, skills and abilities that specialist physicians need for better patient outcomes. The framework is based on the seven roles that all physicians need to have, to be better doctors: Medical Expert, Communicator, Collaborator, Manager, Health Advocate, Scholar, and Professional.”

Dr. Duffin is the author of numerous books and articles in the history of medicine, including the popular text, History of Medicine: A Scandalously Short Introduction, as well as recent works Medical Saints: Cosmas and Damian in a Postmodern World, and Medical Miracles: Doctors, Saints and Healing in the Modern World.  She is the past president of both the Canadian Society for the History of Medicine (CSHM) and the American Association for the History of Medicine (AAHM).  In acknowledgment of her many accomplishments in history and medicine, Duffin has been named a Fellow of both the Royal Society of Canada and the Canadian Academy of Health Sciences.

One thought on “Talk: Dr. Jacalyn Duffin – “Historian as Activist: Tales from the Medical Trench””