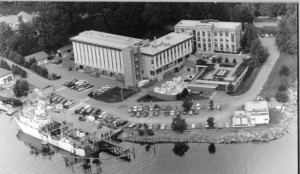 In 2007, Stephen Bocking, professor of environmental studies at Trent University, asked me to conduct some research on British Columbia’s aquaculture industry. The plan included a visit to British Columbia to consult the collection at the Department of Fisheries and Oceans (DFO) library at the Pacific Biological Station in Nanaimo on Vancouver Island.

As a budding historian of Canadian fisheries, I was excited to visit this site. Established in 1908, the station was the third biological research station in Canada and the first on the west coast. Its library—in existence since the station’s inception—proved to be a treasure trove.

A darkened room with close-packed shelves, the library looked like a working scientist’s lumber-room overflowing with material. It was a particularly rich repository of grey literature: scientific reports and studies printed and distributed in limited quantities, and which are usually difficult to track down. These were squeezed onto shelves and, in truth, made me despair that I could navigate this daunting terrain.

Over the course of several days work and with the help of the librarian, however, I found material that supported Stephen’s research project, which led to his publication of new analysis. I was also side-tracked by shelf-reading, a problem familiar to most researchers. You begin wandering along a shelf, randomly pulling out books and reports, leafing through them without any discernible purpose. This is how I found, for example, Stella and Edgar Worthington’s Inland Waters of Africa (1933), an untapped source for a yet-to-be written history of English colonial fisheries administration.

This serendipity and freedom are intangible qualities that physical libraries foster and which digital archives, which are undoubtedly valuable, do not reproduce. And it is one reason, among many, why the library’s closure—one of five libraries that DFO has shuttered—is so troubling. DFO claims that the closures are cost-saving measures; the collections from the five closed libraries will be consolidated in two existing libraries. The lack of physical access will be offset, officials promise, by the digitization of materials.

There remain, however, many unanswered questions. Foremost are concerns that valuable research has been lost, a concern that historians must also share. The photograph of a dumpster filled with books and reports taken from a DFO library in Quebec has only sharpened anxieties that “consolidation” has resulted in an indiscriminate purge. There are also questions about digitization, the rationale used to explain cuts to Library and Archives Canada in 2012. What materials have been digitized? What have simply been discarded? There are no clear answers to these questions.

The promise of open government through digitization is also, apparently, a contingent one. A case in point is the Cohen inquiry into the disappearance of sockeye salmon on the Fraser River. The Cohen commission, which reported in 2012, questioned the wisdom of salmon aquaculture in British Columbia. Among its recommendations was removing from DFO the mandate for promoting salmon farming, which Justice Bruce Cohen found conflicted with DFO’s responsibility for wild salmon stocks.

But if you want to read this report, you are out of luck: the Cohen commission website has been shut down. Given the commission’s cost and importance, those findings should still be available for public consultation. (Fortunately the Watershed Watch Salmon Society has posted the report.)  That the government shut down the commission’s website raises questions about its commitment to transparency and access, questions which the library closures only magnify.

First reported in the Nanaimo Daily News in October 2013, the closing of DFO libraries has gained much more attention in the last several weeks. They also include the Eric Marshall Aquatic Research Library in Winnipeg and the recently renovated library at the St. Andrews Biological Station in New Brunswick. Andrew Nikiforuk, reporting in The Tyee on the closures since early December, has uncovered much of this story (see here and here ).  And as he has pointed out, DFO libraries are not the only ones affected: other federal libraries have also been closed.

The library closures, as Nikiforuk and other commentators have noted, fit a larger pattern of the Canadian government restricting the production, circulation, and communication of scientific knowledge. From the abolition of the long-form census to the closure of the Experimental Lakes Area, the Harper government has demonstrated fear and nervousness when it comes to science and evidence, particularly when they threaten industrial development.

The closures also fit with the government’s gutting of environmental protections, particularly in the Fisheries Act, and their subordination to industrial interests. The latest instance, as reported by the website Northwest Coast Energy News,  is the delegation of the Fisheries Act to the National Energy Board (NEB) in respect of the Northern Gateway oil pipeline. The NEB will now assess if the pipeline project affects fish habitat and decide on any remediation measures. The NEB will also deal with Aboriginal fisheries questions.

You might reasonably ask what library collections have to do with fisheries regulations. Indeed I can understand the desire to consolidate collections; there may well be a case for the ones now taking place. But when dumpsters figure as an instrument of library rationalization, public outcry is justified. More critically, the destruction of libraries underlines what many scientists and researchers already know, that the circulation of knowledge is something this current government wants to restrict.

Will Knight is in the very final stages of completing his PhD in environmental history at Carleton University.