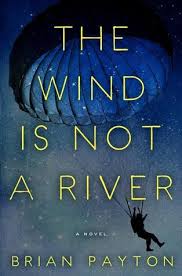 In 1942 Japanese forces took control of the islands of Attu and Kiska, which are part of the Aleutian Islands in Alaska. For a year American and Canadian forces fought the Japanese for the islands, with the toughest fighting coming in May 1943 on Attu. Proportional to the number of men engaged, only Iwo Jima proved as costly to the Americans. Despite this, the story of the only battle of the Second World War fought on American soil does not resonate when most people think back on the war. The Alaskan campaign tends to get lost to the stories of D-Day and Hiroshima.

From that lost history comes a story of love and survival from author Brian Payton. The Wind is Not a River follows reporter John Easley’s struggle for survival in the Aleutians during the Japanese occupation. After his plane is shot down by anti-aircraft fire, Easley is left to live on the inhospitable island. Occasionally noble, occasionally heinous, Easley’s efforts to survive the island take readers on a journey through the extremes to which human beings can be taken.

The counterpoint to this is John’s wife Helen, whose story is told in alternating chapters. Left alone in Seattle, Helen’s love and concern for her husband’s well being becomes too much and she travels to Alaska as part of a U.S.O. troupe. Just as much as John, Helen’s story is one of survival, just of a very different sort. Full of love and desperate for news, Helen highlights the difficulty faced by millions of women on the home front during the war.

There is vividness to The Wind is Not a River that comes from Payton’s research of the Aleutian campaign. In addition to researching the war in Alaska, Payton visited the islands in order to get a sense of their beauty and danger. The reader is rewarded with a gripping tale of survival, which is nicely accompanied by a tale of love.

The Wind is Not a River is not a history of the Aleutian campaign during the Second World War – nor does it claim to be. Instead, it tells a compelling story of love and survival against the backdrop of a forgotten piece of history.

In this episode of the History Slam I talk with Brian Payton about the book. We chat about the history of the Aleutian campaign, his research methods, and the challenge of telling a love story in wartime. I also ask him about writing on unpleasant matters and thoughts of self-censorship.