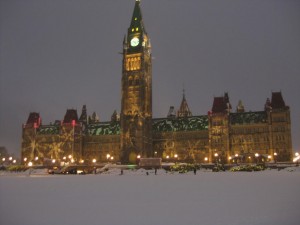 Full disclosure: I live in Ottawa and regularly walk past Parliament Hill and the National War Memorial on my way to Library and Archives Canada. For me, last Wednesday was a surreal day and in the week since the majority of the people with whom I have spoke have agreed with that assessment. Throughout the day I was confused, sad, scared, and angry. I was locked down in a building at Rideau and Dalhousie Streets (about 4 or 5 blocks from the memorial) and yet as I walked home around 5:00 everything seemed a little too normal – with the possible exception of more traffic. When I finally got home, I turned on the CBC and watched until both Stephen Harper and Thomas Mulcair spoke.

At the time, I appreciated hearing from them both. Say what you will about Stephen Harper’s speech, but that he didn’t seem to be shaken was somewhat reassuring in the moment. Say what you will about Thomas Mulcair’s speech, but his paternalistic delivery was somewhat soothing in the moment. And yet when I woke up on Thursday and watched the speeches again, I was incredibly disappointed in what I saw: two men encapsulating their political ideologies in speeches intended to address a national tragedy.

Upon further reflection, however, my anger or disappointment waned and I thought about how these moments of national reflection are coated in political ideology and competing conceptions of Canada. Similar messages can be found in Remembrance Day ceremonies just as they can in Canada Day celebrations. For as much as I want to believe in an altruistic intention of those who organize these types of events, it is difficult to ignore their political or ideological underpinnings.

In this episode of the History Slam – the first installment of our first ever two part episode – I talk with Matthew Hayday, Marc-André Gagnon, and Robert Talbot about the Celebrating Canada Workshop, which took place at the Canadian Museum of History in September. We chat about the purpose of the workshop, the nature of commemoration in Canada, and the efforts of historians to reach wider audiences.

Next Wednesday we’ll be back with the second installment where I chat with members of the workshop about various celebrations and their meaning in Canadian life. And on Friday we’ll have the audio of the Roundtable that opened the workshop.