For Estonians, the twentieth century was a tug-of-war between political independence and social freedoms and repressive subjugation under the Soviet boot. Lynda Mannik’s book, Photography, Memory and Refugee Identity: The Voyage of The SS Walnut, 1948 provides a fascinating snapshot of one moment in that tumultuous history: the journey of the 347 Estonian refugees from Communism who sailed from Goteborg, Sweden to Pier 21 in Halifax and a new life in Canada. The book is a clear and well-written historical monograph that uses the narrative power of photographs to immerse readers. The author also reminds the reader that Estonian refugees have a significant place in Canadian history. As Canada’s first “boat people,” their story is part of a permanent exhibit at Pier 21 that highlights the immigrant experience and arrival in Canada. For Mannik, narrating the Walnut’s voyage also provides an opportunity to explore a period of transformation in Canadian immigration policy. 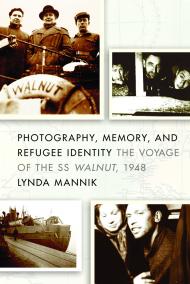 In June 1940, the Russian army invaded and took control of the Baltic States, including Estonia, which had declared neutrality at the outbreak of the Second World War. One month later Estonia was annexed and incorporated into the USSR. The annexation of the Baltic States was recognized as a violation of international law by the United States, Britain and other European countries. While each Republic retained national symbols such as an anthem, flag and coat of arms, political and administrative control shifted to Moscow.

After the Second World War, Moscow’s centralized control over Estonia began with the implementation of mass deportations and a repressive program of Russification. A small co-operative called the Compania Maritima formed and the head of the co-operative, Alexander Kalbus, began soliciting funds for the purchase of a boat to escape to Canada. While it was nearly impossible to find a ship that could make the transatlantic voyage, Kalbus found one built in England as a Royal Navy minesweeper in 1939.

The Walnut, a minesweeper, was originally designed for a crew of 18. To prepare for the journey a retrofit allowed her to give passage to over 347 men women and children. She was so crowded with her human cargo that the interior resembled a honeycomb. Koidula Roiser recalls that she and her husband slept with their backs to each other and their knees wedged against the walls to try to prevent rolling with the waves. Every inch of space was utilized for accommodation in order that as many people as possible could make the voyage. Fortunately the photographs taken of passengers in their bunks are happy ones with the ship bringing its passengers to a new home.

Photos taken of the Walnut’s bunks evoke the Holocaust trope image of concentration camp bunks crammed with prisoners. But they tend to depict happy and comfortable passengers, experiencing only temporary discomfort as they crammed themselves onto the ship that sailed toward freedom.The Walnut arrived in Halifax harbour on December 13, 1948. Among the 347 passengers were 70 children under 16 years old. Mannik’s adept use of ethnographic detail reveals conflicts among the passengers: some wanted to forget about their past in Estonia and begin anew as Canadians, while others clung to their language, heritage and thoughts of home. For the latter group, Canada was a refuge, but Estonia remained home.

The journey of the SS Walnut serves as a bookend for Canada’s wartime immigration policy. At the other end is Canada’s denial of entry to the 937 Jews aboard the MS St Louis who were trying to escape from an increasingly intolerant and precarious life in Europe. On June 7, 1939, the now mythical statement by a Halifax immigration officer “None is too many!” upheld the country’s closed-door immigration policy toward Jews. The St Louis was turned away from Halifax and sent sailing back to Europe. Most of her passengers were murdered in Nazi death camps.

Mannik’s examination of the way the Walnut’s passengers took on the identities of “refugee,” and to a lesser extent, “boat people,” is instructive. She reminds readers that, in spite of our multicultural openness, Canadians continue to categorize refugees as deserving or undeserving. According to Mannik, media imagery is responsible for exaggerating aspects of this dualism. She explains how dehumanizing and de-historicizing visual and textual techniques have been used to depict refugees as others, while solidifying state authority. Contemporary depictions of refugees, especially those who arrive by boat, tend to portray them as less than human, and through this their imposed refugee identity becomes more permanent. By contrast, for the Walnut passengers being stateless refugees was always viewed as a temporary status on the way to becoming Canadian citizens.

First as political refugees in Sweden and then during the journey to Canada, the passengers on the SS Walnut formed what Mannik describes as an accidental community of memory. While each personal experience is distinctly different, a collective identity and memory was formed by the shared trauma of displacement, relocation and entry to Canada as refugees. For Mannik, the Walnut collection provides a way to re-create and re-establish a collective identity in new contexts. The photographs transform the book into a scrapbook that grounds the passengers with a sense of belonging, within a spectrum of emotion and perspective that create their personal identities as Walnut passengers. Her method of analysis will surely become a useful tool for other researchers who are working with similar collections of visual records. Memories conjured will also reinforce a national identity as proud Canadians who have chosen to retain their cultural, linguistic and national connections with their homeland.

The narrative told by Mannik is about a bittersweet journey, not the destination. While Canada represented a new beginning, the connections retained to an abandoned home through language, poetry, literature and art remind the passengers and their descendants that they are Estonian. What Mannik has effectively demonstrated is the power of the photograph to tell a story, to remind and allow people to remember. Her book provides an insightful history of Canada’s first boat people, and a positive, constructive bookend to a darker period, a decade earlier, when none was too many.

Phil Gold holds an MLIS and an MA in History from the University of Western Ontario. In 2006, he began serving as the Archivist and Public Historian at Sunnybrook Health Sciences Centre. He also works part-time as an Adult Services Librarian at Vaughan Public Libraries.