Many of humanity’s most virulent diseases emerged from the fertile intersections of human and other animal bodies. Cures also crossed species barriers, and in the crossing carried a taint of their animal origins. The University of Toronto’s Connaught Laboratories and Farm produced bovine smallpox vaccine from calves infected with cowpox, as well as a variety of products from horses, such as tetanus and diphtheria antitoxins. Photographs disseminated by the laboratory suggest the power of the visual image in calming public fears and managing – even erasing – the animal origins of these biomedical products through an emphasis on hygiene and health.

As Katherine Arnup and Jennifer Keelan have shown for Canada – and Nadja Durbach for Britain – public anger and fear about compulsory smallpox vaccination emerged in a series of popular campaigns from the 1880s through to the 1920’s.[1] While most of the anger was aimed at the compulsory administration of vaccine – intervention of the state into the body of the child and the sanctity of the home – the movements also rejected the animality of the vaccine. On March 1, 1906, when Toronto Board of Education trustee Levee campaigned (5000 signatures in hand) against the compulsory vaccination of school children, he used the strongest possible language: children’s bodies, he said, should not be polluted with “animal matter.”[2]

When Levee’s motion passed, with only one trustee speaking against it, the Toronto Star called on the medical profession to combat the rhetoric of the anti-vaccination groups with facts and arguments. Professor A.B. Macallum made the mistake of amplifying Levee’s rhetoric, repeating “filthy animal matter,” in an outraged letter sent to both the Toronto Star and The Globe.[3]   The problem lay in the fact that Levee was not entirely incorrect.  Bovine smallpox vaccine was lymph taken from the pustules of cows infected with cowpox. Vaccination had earlier involved the transfer of fluid from one human arm to another, which created its own set of problems, and the use of the calf in the late nineteenth century was seen as an improvement. (A calf could not transmit syphilis, or a range of other human diseases as human lymph might.) To produce bovine vaccine, the calf was shaved and scarified with vaccine; five days later large vesicles formed, and when the vesicles were considered ripe they were broken and the lymph harvested. It was this material that was used to vaccinate children against smallpox.

The word “matter” is not as widely used today, but it was redolent of pus, putrefaction and corruption.  “Animal matter” was another order of impurity, especially to a public familiar with the muck and smell of stables and barns.  Until the Connaught laboratories took over production, Ontario vaccines had been sourced from poorly regulated vaccine farms, and, although we might scoff today at the concerns of some anti vaccinators that a child infected with calf material might manifest cow-like tendencies, their concern about the filth of the barnyard was shared by even the medical authorities behind the Canadian Journal of Medicine and Surgery. They opined, quoting the New York Times: “the business of producing virus and serum … cannot be carried on without immeasurable risk to life and health with worn-out horses and sickly calves, nor in dirty stables or improvised annexes to vermin infested barns. Healthy animals, perfect plants constructed and managed under expert supervision, and the assurance of pure cultures with entire freedom from pus organisms are the essential conditions.”[4]

Repugnance at the animal origins of the vaccine was combined with concern about the welfare of the calf. As the British Vaccination Inquirer put it in 1895: “The luckless calves must be no longer strapped and fixed and shaved and scarified and poisoned and fastened in their stalls with fourscore aging sores on their bellies….”[5]   Anti vaccination and antivivisection sentiments overlapped in interesting ways that warrant further exploration. In 1920, when the Toronto Anti-Vaccination League became the Medical Liberty League, antivivisectionists split off to create their own organization. Both anti-vaccinationists and antivivisectionists were resisting the authority and power of laboratory science.

In 1916 when University of Toronto opened the Connaught Laboratories and Farm and took over the production of bovine smallpox vaccine, they launched a campaign to convince Toronto parents of the purity of their vaccine, the hygiene of their laboratory, and the wellbeing of their calves. Robert Defries, the associated director of the laboratories, directly addressed the concerns of antivaccination groups in a 1918 article for the Varsity Magazine Supplement: “This product [vaccine] necessitates exacting care in the development of vaccine from healthy calves, and requires most modern equipment.”  A collage of photographs that accompanied the article,  “Production of Smallpox Vaccine,” took on the real work of reassuring the public. 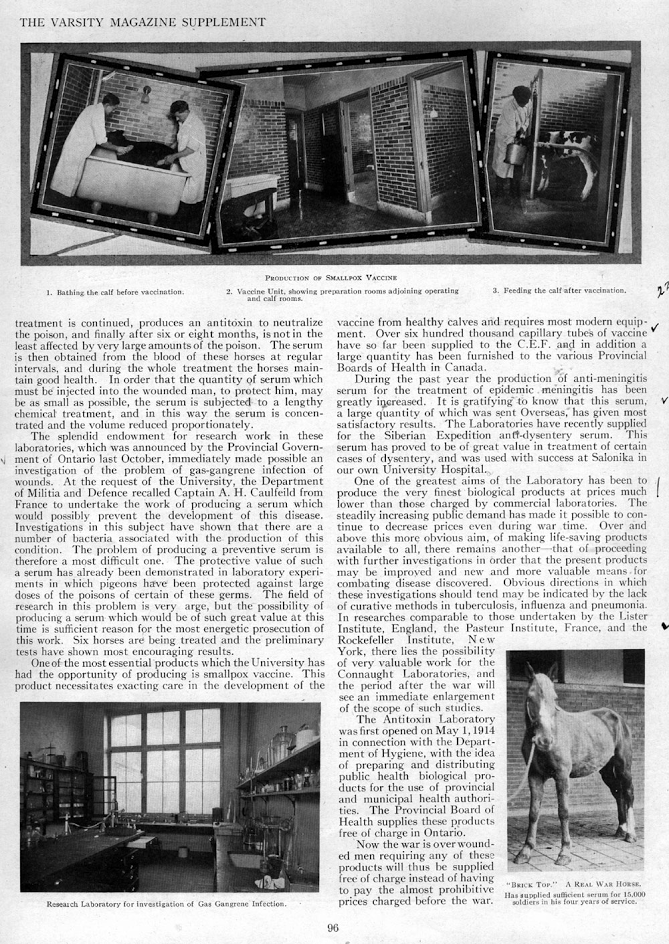 The first image, “Bathing a calf before vaccination,” depicted a calf being washed in a large white enamel bath by two white-coated technicians, in a spotless laboratory.  A second photo “Vaccine Unit” (enlarged in Figure Two) emphasizes the gleaming walls of glazed brick, coved floors, and – again – the white bath. The animal itself disappeared from view in this photograph, the most central and the largest in the collage.  A third photograph, “Feeding the calf after vaccination,” shows another white-coated technician, with a healthy (and clean) calf eating from a large bucket. 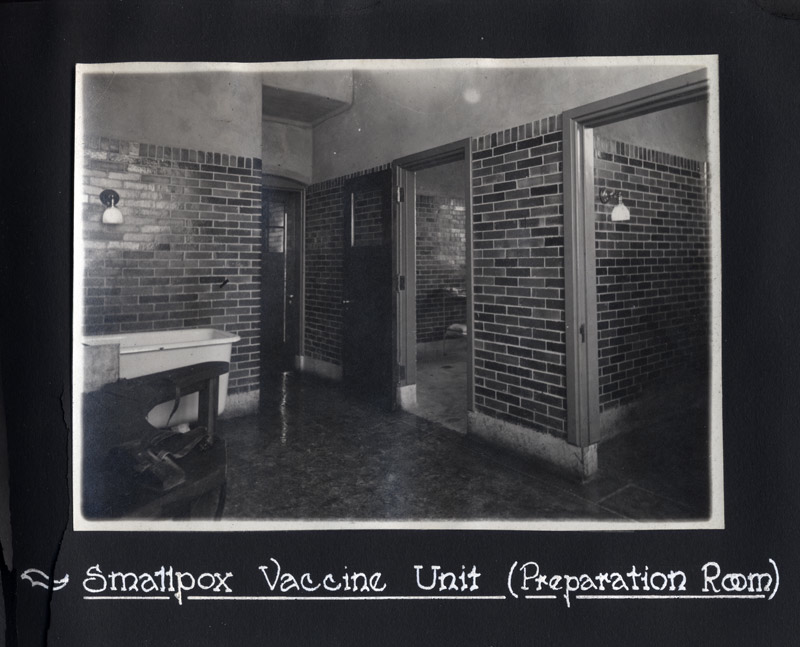 The Connaught archives hold a fourth photograph (Figure Three) that does not appear in the collage, although it appears to have been taken at the same time as the three in the magazine. It shows a calf splayed on the operating table, legs encased in white cotton, with a technician scraping the vesicles, with a glass topped laboratory table next to him.  The technician is white coated, but dark smears of what appears to be blood can be seen on his pants.  This was not, perhaps, an image likely to reassure parents or anti vivisectionists. 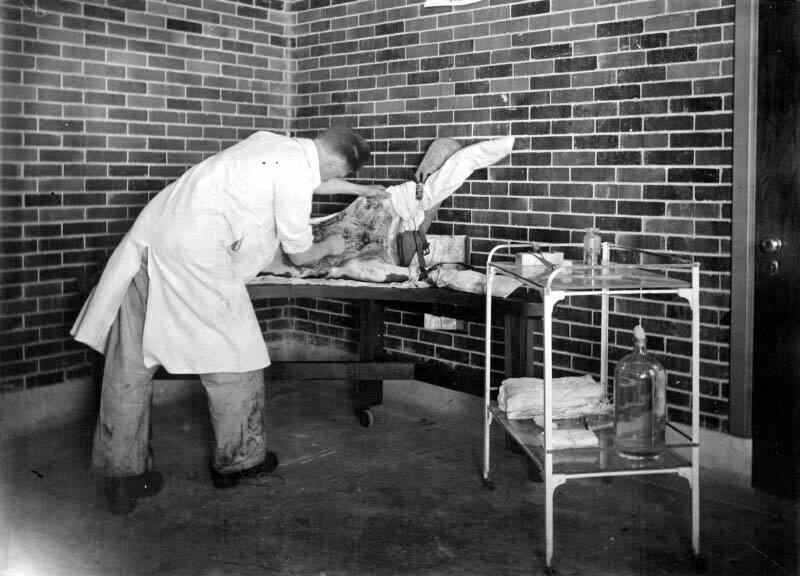 The collage provided the visual counterpart to textual reassurances by the Dr. Hastings, the Medical Officer of Health, in the Toronto Star that the Connaught vaccines were “absolutely pure.”  Problems arose, he said, when doctors in regular practice used vaccines from other sources.[6]  Hastings referred to the Connaught as a laboratory, not a farm. Not a vermin infested farm, the Connaught, but a modern, scientific laboratory.  The animal was almost, but not quite, incidental.

Joanna Dean teaches animal history and environmental history at Carleton University.  This paper emerged from a chapter on the use of horses for the production of tetanus antitoxin in the volume, Animal Metropolis: Histories of Urban Animals in Canada, co-edited with Christabelle Sethna and Darcy Ingram, and currently under review with the University of Calgary Press.

Thanks to Chris Rutty, archivist at the Connaught Campus, Sanofi Pasteur Canada, for sharing his knowledge. All errors are my own. Thanks to Ian Mosby and Jim Clifford for the opportunity to write about calves as well as horses.

[1]By vaccination, they were referring to inoculation with cowpox virus, done in order to confer immunity to smallpox.  Jennifer Keelan,  “The Canadian AntiVaccination Leagues, 1872-1892,” PhD thesis, University of Toronto, 2004.   Katherine Arnup, “Victims of Vaccination?: Opposition to Compulsory Immunization in Ontario, 1900-1990,”  Bulletin canadien d’histoire de la médecine. 9,2 (1997), 159 -176.  Nadja Durbach, Bodily Matters: The Anti-Vaccination Movement in England, 1853-1907 (Duke University Press, 2005). These authors are sympathetic to the concerns of parents, and point out that the science of vaccination was still under development.

4 thoughts on “Animal Matter: The Making of ‘Pure’ Bovine Vaccine at the Connaught Laboratories and Farm at the Turn of the Century”