What stake does historical research have in fictionalized cinematic productions? Does film offer another medium to convey this research effectively to new audiences? What role can the academic historian take within such endeavours? In his latest book Inside the Historical Film, Bruno Ramirez, a history professor and screenwriter at Université de Montréal, considers these issues by investigating the relationship between historical research and cinematic narratives. 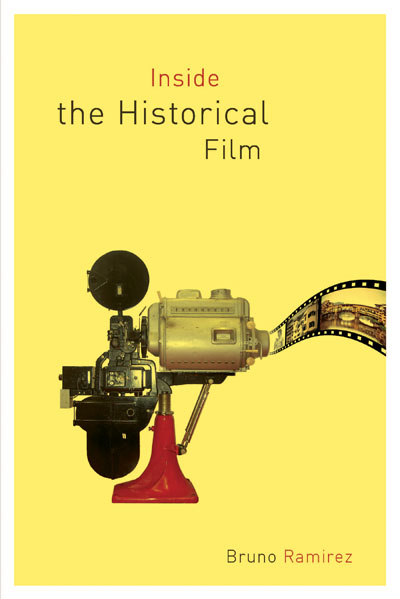 Acknowledging both the attraction to and the scepticism of historical film by historians, Ramirez traces the study of historical film. He does not focus solely on how various films have portrayed historical events. He also asks how fiction has been employed for these kinds of narrations: is it used primarily to increase a film’s commercial viability or does it have the potential to augment an audience’s understanding of the past? The manner in which historians and filmmakers engage with these notions inform the book’s chapters.

Ramirez explores the development and professionalization of the scholarly study of history and film during the twentieth century. He acknowledges the importance of film’s visual and technical components and more could be added here about the visuality of film but he is careful not to stray from the book’s major theme. He notes that the appeal and challenge of film is through its combination of the visual and the dramaturgical. The result is that the “filmic image, in other words, speaks through its own language” (33).

The third chapter explores how the historian might establish a dialogue with film and “its own language.” Ramirez notes how historical research is undertaken in order to produce a credible context about a particular era or person and how it may not be dissimilar to other forms of research undertaken by historians. Ramirez then moves to an examination of a number of works by well-known filmmakers, such as Ingmar Bergman, Federico Fellini and Roberto Rossellini. Having some previous knowledge of these films would benefit the reader but by grouping these works into three different subsections, Ramirez demonstrates different approaches to addressing the uses of historical research and fiction within various films.

A highlight of this book is a section on Ramirez’s own practice concerning the stories of the Italian-Canadian experience in Montréal. It is a unique look at the making of Caffé Italia, Montréal (1985), La Sarrasine (1992), La déroute/Mr. Aiello (1998), and Il Duce Canadese (2004) by someone who was personally involved with these productions. The melding of the filmmaking process with historical research is discussed with specific examples of how textual documentation and oral history accounts were combined with fiction, resulting in more nuanced depictions of the community. Although these projects offer variations on the workings of history and fiction, they also offer a kind of visual historiography of the Italian-Canadian community in Montréal.

Continuing the discussion of practice-based approaches, Part Two consists of interviews with various filmmakers including Deepa Mehta, Constantin Costa-Gavras, and Margarethe von Trotta. By including these interviews, Ramirez attempts to “draw filmmakers into dialogue with academic historians” (135). This link between historians and filmmakers is illustrated in the discussion with Denys Arcand that addresses Arcand’s educational background in history and his early work for the National Film Board before his turn to feature film. These interviews give the reader insights into the work undertaken by those in the industry. They also reinforce the continuing importance of film as a medium that disseminates aspects of historical knowledge to contemporary audiences.

Integrating examples from his own experiences and that of various film practitioners within a broader discussion could have resulted in an unwieldy framework. By dividing his book into two parts, however, Ramirez is able to comprehensively explore this form of film. This book will easily find an audience among scholars and students in film studies; however it may also be of use to historians who are seeking methods to approach a visually-based medium. Although the book deals with a number of complex themes, Ramirez`s lucid style also makes the material accessible for a more general reader.

Through a consideration of a wide range of films, as well as various historical and geographical contexts, Ramirez highlights the many intersections between history and film and while demonstrating the possibilities for the historian to engage with this material. Inside the Historical Film acts at once as an examination of the historical film, a chronicle of various contemporary filmmakers and a personal account of a screenwriter’s journey.

Currently based in Alberta, C.S. Ogden has written on topics concerning art and culture in Canada and more recently on digital photography and the contemporary pilgrimage experience.