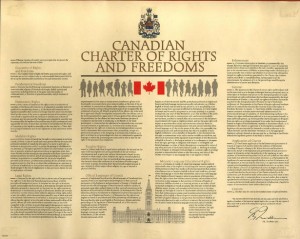 Earlier this year, the Supreme Court of Canada ruled that Canadian workers have the right to strike as per Section 2 of the Charter of Rights and Freedoms. This builds on a 2007 ruling that bestowed the right to bargain collectively. Both reversed a 1987 Supreme Court ruling, and two similar cases (‘the labour trilogy,’) which excluded those rights. But still absent from the Charter are rights to basic economic security, and this omission is not an oversight.

Rather, Pierre Elliott Trudeau’s vision for the Charter was to serve as a locus for a liberal and secular patriotism based in a collective understanding of what human rights did and did not entail. This combined with a failure of the New Democratic Party and organized labour to fight for social, economic, and labour rights, giving us a limited conception of rights that continues to shape our national philosophy, guide our approach to policy, and limit the validity and promise of our democracy.

For Trudeau, the Charter was to forge a societal recognition that rights should not politicized, because they “are the common heritage of all Canadians.” In contrast to the 1867 constitution, which lacked an educational message about what Canada was and aspired to, the Charter would also constitute a pedagogical tool and “enlightened basis for patriotism.” But Trudeau was clear that this collective patriotism would not include workers and poor Canadians, even as it included numerous minorities. The workers and poor were omitted “because economic rights do not simply restrain others in order to protect the individual in the exercise of his freedoms, but instead seek to impose obligations on the state or others for the positive benefit of the individual.”[1]

While there were exceptions, labour largely felt the Charter was a distraction from contemporary economic and social concerns. As Larry Savage cites one labour leader putting it: “I think we goofed as a labour movement…we should probably have paid a lot more attention to the Charter than we did.” Scholars Leo Panitch and Donald Swartz agreed:

Despite the repeated attacks on the right to strike, the CLC, virtually alone among large interest groups in Canada, remained aloof…Although the practical effects of such declarations may not be great, inclusion of such rights at least helps to legitimate union struggles around these issues. Even an unsuccessful campaign…would have put the issue before their members and the broader public.

Before the Charter debates, NDP leaders had linked basic human rights with social, labour, and economic guarantees. Tommy Douglas had argued that labour’s ability to bargain and strike was “the sine qua non [meaning: without which, there is nothing]of a free society,” while Ed Broadbent emphasized that unionization and industrial democracy was a “fundamental right of worker’s citizenship.”[2] Both of these statements, and many like them, understood social and labour rights, not as a conditional privilege doled out and rescinded on the whim of Parliament, but as no less important than the freedoms of speech and conscience. The implication was that, without these rights, workers are not only oppressed, but that Canada was not a genuine democracy or free society.

But by the time the Charter debates swung into full gear, NDP leadership went largely silent on socialist conceptions of rights and freedoms, even as they championed those of women and First Nations’. Broadbent, like most of the party leadership, felt labour and economic right inclusions were unnecessary, because the goal was “to provide a…civil framework…from within which we can work as part of the labour movement or as a democratic socialist movement to implement our goals.” Put another way, labour and social rights were important, but not fundamental; good to have, but not required as a precondition of democracy.[3]

Some might argue that the NDP and labour did not push Trudeau on a socialist conception of rights because his House majority would have blocked it outright, but even small-l liberals like Franklin Delano Roosevelt have demanded the codification of social and economic rights:

This Republic had its beginning…under the protection of certain inalienable political rights…They were our rights to life and liberty…As our industrial economy expanded—these political rights proved inadequate to assure us equality in the pursuit of happiness. We have come to a clear realization…that true individual freedom cannot exist without economic security and independence. Necessitous men are not free men.

But what does this all mean to us in the here and now?First, the Charter has done a great deal of good for millions of Canadians, protecting civil liberties and expanding equity for women, GLBTQ* people, the disabled, First Nations, and many others. But since the time of the Charter debates, we have witnessed a historic assault on social programs and labour unions, seeking to roll back the gains made in the postwar period. Accompanying this effort has been a substantive decline in private sector unionization rates, a stagnation of wages, along with rising income inequality and increasing child poverty. The Charter has helped Canadians become more equal within socio-economic classes by addressing discrimination, but its omissions have allowed a more unequal Canada, where the poor have less rights and freedoms than in 1982.

I also feel Trudeau’s dream of the Charter taking on an educational and symbolic role has come true: many Canadians identify closely with their Charter rights, and it is an oft-invoked document in the defense of the marginalized. It does, in this sense provide a form of patriotism based on a secular nationhood. But if this is the case, we have to ask what the Charter’s limitations tell us about ourselves. How is it the case that in 2015, or even in 1982 for that matter, Canadians could accept a nation where one is not given the right to, among other things:

In the end, the Charter’s omissions tell us that our rights are extremely precarious, for one has scant few abilities to practice freedom with an empty stomach, a roof-less head, and a general lack of economic opportunity and equality. To a very large degree, Canada’s status as a democracy will be dubious until such rights are recognized constitutionally.

It is telling that the NDP—still seen as the champion of the poor by many—removed in its recent preamble updates a commitment to the “abolition of poverty” Canadians, many of whom profess our national values to include equality, compassion, and opportunity, should ask why the emblem of our rights and freedoms, or our elected officials, do little to advance them. The courts recently got it right on the question of labour rights and freedoms, but only after getting it wrong twenty years ago. This is the detriment to leaving our rights to chance because of a limited Charter with a hobbled understanding of rights and freedoms.

Christo Aivalis is a PhD Candidate in History at Queen’s University. His near-complete SSHRC-funded dissertation examines Pierre Elliott Trudeau’s relationship with organized labour and the CCF-NDP from 1945-2000. His work has been published in sources including the Canadian Historical Review, Labour/le Travail, Our Times Magazine, and Rankandfile.ca. He is also a dedicated activist within the NDP, various labour bodies, and in municipal governance.