For the past two years I’ve written blog posts for the opening day of the Canadian Historical Association’s annual meeting (click here for 2013 and here for 2014). In those posts I created word clouds from the relevant paper and session titles in order to get a sense of what the field of Canadian history actually looks like. As historians gather today in Ottawa for three days of meetings (join us today at 5 pm for the Active History CHA group’s annual meeting), we have an ideal opportunity to take the pulse of Canadian history in order to get a broad sense of where the field is headed.

Today’s post is similar to those in the past. It is an overview (rather than a rigorous study) of the conference program (available here). Importantly, though, today’s post draws some slightly different conclusions than my earlier posts that are perhaps indicative of broader transitions in the field. This year’s program has some interesting things to say, I think, in terms of the place of Indigenous people, situating Canada in a global context, and the place of women in the past.[1]

To begin, I’ve once again created a word cloud from the 267 Canadian-history focused papers on the program in order to illustrate the words most frequently used in paper titles. Immediately we can see some central themes. This year we see “war” leading the list, followed by “development”, “world”, “indigenous”, “interdisciplinary”, “international”, “policy”, “political”, “politics”, and “state”. Though the political turn is somewhat surprising and perhaps represents resurgence of interest in political history, the emphasis on war (which has been relatively consistent at the CHA) and Indigenous peoples was expected given the anniversaries around the First World War and an associate “mini-conference” coordinated by the Aboriginal History group.[2]

The most significant difference between this word clouds and those I’ve created in the past is in the declining prominence of women. In the past, “women” has been relatively prominent in the word clouds I’ve created, though it also declined in the word cloud I created last year. In 2013, when I looked at the programs over the decade between 2004 and 2013, the word “woman” ranked third overall. This year, though “gender” is ranked 17th and somewhat prominent in the image, “women” and “feminism” are way down the list. This may be an anomaly.

But it is worth noting that in session 87 on Wednesday morning (Practicing the Discipline of History) Anne Toews, Lori Chambers & Elise Chenier will put forward a presentation provocatively titled: “Still Working in the Shadow of Men?: An Analysis of Sex Distribution in Publications and Prizes in Canadian History.” Though I have not heard anything about the content of their paper, their title suggests that perhaps this word cloud reflects broader trends in the field. Their title, however, also demonstrates a limitation of my methodology in the sense that they do not use any key words that indicate the overall direction of their paper, despite it being clear in the title itself (it is impossible to discern context in word clouds, just frequency). At the very least, it should challenge us to think more deeply about the gendered dynamics of the profession as a whole and our broader professional and historiographical interests. 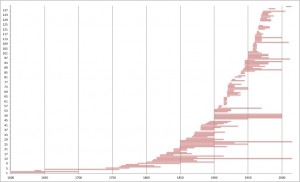 Chronological Focus of Papers at the CHA

In addition to the word cloud, I also created a graph from the 140 papers with dates included in the titles in order to get a sense of the broad chronological focus of the conference. Once again – and this is a theme emphasized over the past two years – you can see that most of the papers delivered this year (about two thirds) focus on a subject after the beginning of the twentieth century. One-third of the papers address the period after 1945. The more recent focus of the CHA is not all that surprising and is consistent with the program results from previous years (see the graph below for results from 2004-2013).

For those of you interested in understanding the significance of this absence, the subject will be the focus of a round table on Wednesday morning that Robert Englebert and I coordinated entitled: “Who Killed pre-Confederation Canadian History”. In this session, Beatrice Craig, Michel Ducharme, Jane Errington, Alan Greer, Elizabeth Mancke, and Adele Perry will share their thoughts on the subject and then we’ll engage in a broader discussion led by questions and comments from the audience.[3] Tomorrow’s post on this site, by Englebert, will address this subject more directly. 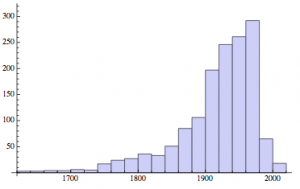 I also broke the program down by region. Here, the results are not all that different than those I found when I last did this with the 2013 program. Though this time there are more papers on Quebec than Ontario, both provinces continue to have the most explicit and direct interest, followed by the other three regions (Atlantic Canada, B.C. and the Prairies) and then the North being of significantly less interest. In order to put this in perspective, I have situated the regional papers (total = 95) relative to each region’s population.

In the table below, you can see that historians’ interest in Atlantic Canada, Quebec and the North outweighs their present-day demographic significance (though perhaps not their historical significance), while Ontario and the Prairies are studied far less than their population might suggest. When compared to landmass there are few surprises (Nunavut is massive!) where most regions are over represented except for the North and the Prairies. The conclusion from this, I think, is that Prairie history is underrepresented at the CHA (at least by these two indexes).

Significantly, papers with an international or transnational focus were significantly higher than in 2013 and outweigh any regional focus within the conference. Admittedly, because of the impressionistic nature of this study, and the length of time between now and when I did the 2013 count, this may reflect a change in how I counted papers, but the prominence of “world”, “international” and “transnational” in this year’s word cloud suggests that this years meeting has a more global focus than in the past. Aside from “world”, neither of these other words are prominent in earlier word clouds. I suspect this reflects a broader shift in the field towards situating Canada more explicitly within global perspectives (read some 19th century missionary literature to see both why this is necessary and its deep roots).

Finally, I also looked at language. Thirty-seven of the papers on the program (about 12%) will be delivered in French. This is significantly better than the six papers delivered in 2013, but (especially given the conference’s proximity to Quebec) is not reflective of the proportion of francophones in the country as a whole, which is closer to twenty-two percent of the overall population.

What we see from this (albeit impressionistic) study then are a few important observations: First, Indigenous peoples, political history, and global perspectives are driving themes of this year’s conference and – at least based on my experience – rising trends within the field as a whole. Second, women’s history appears to be less significant than it has been in the past (though there are some important panels and papers on the subject being delivered this year: Session 60 on Tuesday morning, for example, will focus on “Rethinking Gender and Women’s History”). Likewise, with four-fifths of the papers focused on Canada’s post-Confederation history – a fact that persists over time at the CHA – it seems relatively safe to declare that the organization’s overall focus is upon the activities within the nation-state after it was created in 1867. Similarly, despite efforts to work as a bilingual organization, anglophones continue to be overrepresented on the conference program relative to the country’s linguistic breakdown.

Thomas Peace is an assistant professor of history at Huron University College and an editor at ActiveHistory.ca.

[1] I want to stress that what appears here is a window into the CHA’s 2015 program rather than an exhaustive study. I’ve outlined my methodology in earlier posts, but it essentially uses Wordle, Voyant tools, and manual counting to arrive at its conclusions. I post this as an encouragement for further study and as an opportunity to compare this year’s program with those in 2014 and 2013.

[2] I have deliberately excluded history-related words like “historical” and “century” and national words like “Canada” which are obviously prominent. I have also controlled for everyday words such as “and” and “the”.

[3] It is important to understand that this methodology is flawed. The paper I am delivering on Tuesday morning, for example, is entitled “Context Matters: Towards a Continuous History of Schooling and Colonialism” and is therefore not included in the dataset because its title does not include dates.

4 thoughts on “What does Canadian History Look Like? The CHA in 2015”