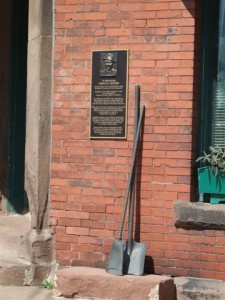 I never knew Harold Geddes, although I saw him now and then fifteen years ago when I first starting working at Mount Allison. Geddes died in 2004 after a long life that is now marked — literally — on the town of Sackville, New Brunswick. He was one of those characters that people in small towns love or wonder about, the kind of person who is described as quirky, eccentric, or weird depending on one’s perspective. He is best known for a singular (and long-standing) act: street cleaning, a point clearly made by the plaque that commemorates his life. In it, we see an aging but still vital man, hat tilted, who stares firmly, unapologetically, and directly at the observer. The effect is to present Geddes as a self-confident man who did not flinch from someone else’s gaze. To one side are the tools of his trade: a broom and shovel. The Geddes memorial is situated across the street from the Sackville, NB “art wall,” that commemorates better-known local and national figures, including the poet Douglas Lochhead. Exactly why Geddes became celebrated part of local history is telling. He represents, I want to suggest, an interesting alternative engagement with the past and what should be celebrated in it.

The details one can garner about Geddes life are sparse and not always flattering. He was the kind of person studied in the aggregate by social historians — a part of an evolving twentieth-century working class — and ignored by so-called national historians interested in political leadership. The information that I’ve been able to find indicates that Geddes was born in 1914. His parents were killed in the Halifax Explosion, which led him to Sackville where he was “taken in” by relatives. He finished school and worked in a local foundry, left the province for a while to search for a better job, but returned to the region to work in a Nova Scotia war industry during World War II. After this, he worked as a custodian at Mount Allison University until retirement when he began a new self-appointed twenty-year career as a volunteer street cleaner. As an obituary notes: “For as long as many of us can remember, he spent his days clearing the downtown sidewalks of snow in the winter, sweeping them clean in summer, cleaning gutters of leaves and dirt, washing windows and tidying up broken glass and dangerous litter.” By all accounts he was a “gruff,” opinionated man noted for unusual behaviour. For instance, he apparently so disliked tap water that he lugged his own drinking water from a local booster pump twice a week.

Geddes’ avocation earned him community awards and respect. Markers of his life show up in an usually large number of places: a story in a local historical association newsletter, the C.V. of public artist Kip Jones (who crafted the memorial), another blog that provides a sort of editorialized travel log of Sackville, an online obituary, a Globe and Mail obituary (a copy of which is preserved by the Mount Allison University news archive), the guide for the Sackville Arts Walk tour, and the Sackville Visitor’s Guide. In one way or another, in other words, Geddes impressed people so much that his life has become part of local lore.

This is strange and not simply because Geddes behaviour could be considered odd. It is strange because Geddes seems to have intentionally avoided the public eye. He received awards but, upon his death, he asked that there be no funeral service, nor was the funeral home to hold visitation hours, the details of a later graveside service were not provided (an obituary stated only that it would be at a “later date”). Geddes also requested that there by no flowers at his funeral, nor did he specify a charity mourners could support in his memory. This was their choice. It is almost as if Geddes was trying to edit himself from history by minimizing markers of his life.

Why, then, is Geddes so important to Sackville? He is obviously commemorated for what he represents but exactly what this might be varies from description to description. In his books, the American author Jon Krakauer explores the boundaries and margins of American society. More exactly, he focuses on unusual (and often disturbing) incidents or individuals in order to determine what their lives illustrate about the dynamics of the mainstream society they rejected. Geddes’s importance is linked to this sense of boundaries and limits. The dominant narrative is that of local colour: a stereotyped gruff big-hearted man devoted to public service around whom the local community “rallied” in order to commemorate both him and the values to which he selflessly devoted himself. This story is one that is as much about the town as it is about Geddes. It is about unity of purpose and the ability of the community to raise the resources to commemorate a local hero.

There is nothing untoward about this story, but it disguises other narratives that also merit attention. These were laid out most clearly in Nancy Gilbert’s obituary. What attracted her to Geddes, Gilbert explained, was both his idiosyncrasies and his humanism. The idiosyncrasies are oddities but also markers of individualism. No appreciative memory of Geddes tried to paint him as a saint. But, they also respect Geddes for who he was. And, Gilbert hints at a far more complex character. While none of his own thinking — his own words — seems to have survived in the public record, the fact that he was concerned about the world, read up on current events, and discussed his views with students at the university is important. These views — whatever they might have been — are not minimized but treated as valuable in their own right.

Gilbert also highlights Geddes humanism: “He had a way of befriending interesting and unusual students at Mount Allison, like the student president from Mumbai who went on to study as a Rhodes Scholar. [They] had many spirited conversations about the state of the world. Or my daughter who worked one summer in the local café and told stories of Harold coming in and buying her ice creams because she ‘deserved a treat.'” Here we see connections forged on the basis of consideration as well as shared interests.

Finally, memories of Geddes seem also to be about a grounded sense of self. The unflinching character conveyed by his memorial is mirrored by Gilbert’s memories of man who did everything he did with purpose.

The way Sackville has marked Geddes’s life is not self-evident. As I already suggested, it could be told in different ways or ignored altogether. A local boosterish narrative, for example, might have tried to link Geddes’s life to a story of town progress through industrialization and a knowledge economy creating “spin off” jobs. A study geared to migration history might look at the factors that led him away and then back to the Maritimes and what this indicates about regional human and economic geography. By commemorating Geddes differently, markers of him tell a story that avoids seeing him as a metaphor for master narratives. What is important to mark in history is the character of the person, his or her idiosyncrasies, strengths and weaknesses, and commitments. This produces a type of narrative that is focused on the individual and his (in this case) connections to other people, their values, and sense of self that is tied to a local community but not dependent upon it.

Perhaps by implication, this is a form of memory that looks to respect the individual by not reducing his life to a pattern or historical process. Instead, it is a humanistic narrative that suggests that the key to community is the care of the other realized through those who would otherwise have been forgotten by history. Said differently, Geddes life gains importance precisely because it is irreducible. And, it is precisely these values — the irreducibility of a life, consideration and care — that are the object lessons of Geddes commemorated life. What we learn about the past are that these are the things that forge community and that mark a good life.

Andrew Nurse is a professor in the Canadian Studies program at Mount Allison University in Sackville, N.B.