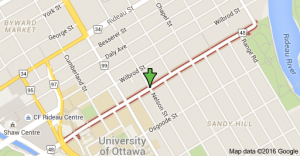 Before I moved to Ottawa, my only experience with the city was a brief research trip, during which I heard about the nation’s capital radius rule. The rule holds that if you’re standing on Parliament Hill you can walk 15 blocks in any direction and still feel like you are in a national capital. That radius includes the Supreme Court, Library and Archives Canada, several museums, a variety of embassies, high commissions, and consulates, and the core of the city’s ‘business district.’ Once you wander outside that radius, however, Ottawa feels like any other town in this country, with its mix of suburban housing, strange traffic patterns, and chain restaurants.

When I first got to Ottawa in 2009, I lived inside that radius and rarely left – mostly because every time I ventured further afield, I was reminded that the radius was a pretty accurate description. More recently, however, the city has undergone a bit of a revitalization that, in my opinion, has either expanded the radius or made it an obsolete concept. The completion of Lansdowne Park, the construction of light rail, and the redevelopment of Lebreton Flatts are a couple examples of Ottawa’s newly found penchant for growth. There is work to be done, of course, as Tim Harper in the Toronto Star recently asked “Why is our Nation’s Capital so drab?”

In addition to the major projects spearheaded by the municipal government, there are plenty of grassroots groups working on improving the city’s cultural reputation. One of these is Prime Minister’s Row, a group which is conducting research on the many historical figures that lived on Laurier Avenue East in the Sandy Hill neighbourhood. Their goal is to take advantage of the city’s built heritage to create Ottawa’s first street museum. By including both cultural and political figures in their research, the group hopes to attract a diverse audience to a part of the city that isn’t on the radar of many tourists.

In this episode of the History Slam I talk with friend of the show Aaron Boyes, who is currently working with Prime Minister’s Row. We chat about the centralization of Ottawa’s tourist attractions, the geography of a street museum, and the challenges of researching a localized project that is also national in scope. In addition, we address the gender and diversity gaps inherent in studying Prime Ministers and Fathers of Confederation and the group’s efforts to be inclusive in their research.