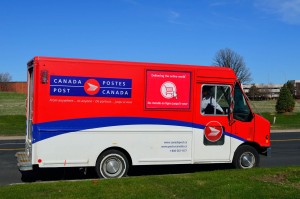 Over the past few weeks, people, organizations, and small businesses have been left unsettled over a looming Canada Post lockout of its unionized workers, which would leave the country without mail access. However much we live in a digital world, the public postal service continues to have a logistical and cultural prominence.

The dispute is based on Canada Post’s assertion that they need greater labour flexibility and cost efficiency to spur competitiveness in a world with more parcels, and less postage. As a result, Canada Post wants the Canadian Union of Postal Workers (CUPW) to accept more part time labour, along with a two-tier pension model that would put new hires under a defined contributions plan as opposed to a more secure defined benefits plan.

As I’ve written recently, CUPW is resisting a two-tier model on behalf of future postal workers. If they simply represented existing members, it would be easy to concede the existing pension model for members-to-be. This is a strong application of solidarity between generations of workers, but it is also a recognition—which has played out many times historically—that alliances between young and old workers need to be actively nurtured for the good of the labour movement.

Most of the historically-relevant context has arisen in the postwar era. Historians like Ian Milligan have noted that, while their parents had direct experiences with the Great Depression and total war, young workers in the 1960s and 70s grew up in a time of relative peace and prosperity. This environment, combined with more pervasive media and higher levels of formal education, meant young workers had higher expectations, and were more apt to challenge societal preconceptions around order and respectability in order to achieve those expectations.

This scenario meant that there were often conflicts between young union activists and older labour leaders. Often, the former would reject contracts negotiated by the latter, and would sometimes engage in controversial wildcat strikes to deal with workplace and contractual issues. For both employers and unions, this youthful energy provided a stark challenge to the status quo, with Pierre Trudeau in 1968 saying that this generation comprised “the great threat…to organized society.”[1]

The boomers certainly caused headaches, but they undoubtedly ushered in social and economic reforms thereby regenerating unions with new ideas and leaders for a modern context. Indeed, it was young activists in CUPW, especially women, who prioritized maternity leave in the 1970s and 1980s, which made CUPW the first national union to successfully bargain for such provisions. Much the same can be said for the implementation and enforcement pay equity. If not for pressure on both employers and the union old guard, such reforms would have been either overlooked or opposed.

Fittingly, Canada’s contemporary labour context also contains a distinct generational gap. Whereas the baby boomers lived in a world of expanding expectations, we are in the midst of a generational erosion of labour standards. Low private sector unionization, rising precarity, explosion of unpaid labour, eroding social programs, vanishing workplace benefits, and increasing costs of education and real estate have placed this generation a positon without much optimism. As some have said anecdotally, this generation might well be the first in Canadian history to be poorer than the one that preceded it, even as Canada is experiencing historic levels of wealth on aggregate.

With this in mind, young worker activists are striving to demonstrate that the attack on organized labour affects their generation disproportionately, and that the concerns of young workers must be central in negotiations and legislative reform. They have demanded greater representation in union leadership and at the bargaining table, and have challenged the establishment in doing so—much like the baby boomers did in the 1960s and 70s. One of the key demands from young workers is resisting two-tier wage and benefit models in collective agreements, which do little more than formalize unequal pay for equal work.

Opposing these compensation models is vital, because they strike at the very heart of solidarity, and at unions’ ability to sustain themselves with dedicated members. What became clear in the postwar era was that young workers were not content with union structures and cultures as they had been. Likewise, young workers today need a movement that addresses their concerns, reflects changing demographics, operates within their 21st century workplaces, and upholds their interests.

This is in part why the current CUPW-Canada Post negotiations are so pivotal. For the next generation of workers, it is a bellwether for what sort of compensation and retirements they can expect relative to their parents. For trade unionists, it will demonstrate whether or not the movement can survive as one dedicated to all members. If today’s labour leaders fail to preserve the gains of previous generations, they will have little cause to be judgemental when the next generation of workers looks askance at proclamations of ‘solidarity forever.’ But if they can work with new activists to score important victories, we might well see some of the early postwar optimism yet again.

Christo Aivalis is an adjunct professor of history at Queen’s University. His dissertation on Pierre Trudeau is under review with UBC Press, and his next book is a biography on labour leader A.R. Mosher. His work has appeared in the Canadian Historical Review, Labour/le Travail, Our Times Magazine, Canadian Dimension, Ricochet, and Rankandfile.ca. He has also served as a contributor to the Canadian Press, Toronto Star, CTV, and CBC.

One thought on “Intergenerational Solidary? The Postal Labour Dispute and the Historical Context of Young Workers”