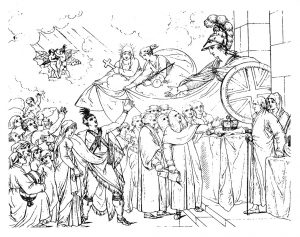 Reception of the American Loyalists by Great Britain in the Year 1783. Engraving by H. Moses after Benjamin West.

The election of Donald Trump as US president raises concerns about the impact on Canada: on trade, energy policy, currency exchanges, pipelines, climate change. Most anxiety inducing is the toxic turn of civic discourse, as the US political process tolerated expressions of racism and sexism, as well as outright lies and intimidation.

The contaminating effects, we fear, may spread north. Although Canadians now have a cultural confidence about their differences from Americans, and believe that they should be protected, the task is complicated by the difficulty of identifying these differences.

At a very mundane level, Canadian “niceness” might be undermined. That niceness, however, is not from Canadians spending more time in Sunday school (lower than in the US) or table time with parents over supper.   It reflects a culture of comity, of courtesy and consideration in civic discourse, dating back to the Loyalists of the 18th century. As refugees from a war they opposed, these Americans moved north armed with words not weapons as the primary tools to rebuild shattered communities and forge deliberative governments.

Loyalists are tricky to define. They spanned ideologies, religious backgrounds, and socio-economic positions, from humble farmers and tradesmen to wealthy merchants and office holders. But they shared a common value: they deplored elite manipulation of unruly youth and populous disenchantment for political ends. They criticized both rebels and the British for responding to a constitutional crisis with armed violence.

In a world in which participatory government was still unusual, the Loyalists’ distress at the resort to violence was not conservative squeamishness. They were genuinely concerned about stewarding what was politically progressive by any standard of the day. Violent revolution would only resolve the constitutional crisis by rupturing the political community. The rebel success in founding the United States, and the subsequent wave of revolutions in France, Haiti, and Spanish America, twinned violence and political progress in the narrative of modernity. Resorting to violence to resolve political problems and promote political progress was normalized.

British North Americans took a path to modernity based on dialogue and discourse. Many results were salutary, most famously responsible government. Others were not salutary. Canada’s cultural complexity conflicted with 19th-century notions that societies with participatory government could only be stable if culturally homogeneous. Canadian political leaders used words coercively and with violent consequences to eliminate the complexity they deemed most dangerous. They dispossessed Indigenous peoples and sent their children to residential schools, made French Canadians and Acadians second-class citizens, blocked Chinese residents from citizenship, sent Sikhs back to India, turned away Jews fleeing Hitler, and interned Japanese Canadians. And all done virtually without firing a shot.

The Second World War and Holocaust drove home the unconscionable consequences of the belief that social stability and participatory government depended on cultural homogeneity.  The lesson was not lost on Canadians, who questioned the imperative of cultural homogeneity, and slowly began the seemingly risky enterprise of building a politically stable society on multicultural foundations.

At the core of this bold and contested experiment was a widespread Canadian confidence in words as the best tools for forging social stability, one that spans diverse cultural groups. In October 1970, Canadians deplored both the FLQ’s kidnapping of Pierre Laporte and James Cross and Pierre Trudeau’s military mobilization, a position reminiscent of the Loyalists deploring both the rebels and the British for resorting to violence to solve political problems.

Canadians have actively utilized and protected speech rights and the public sphere. Canada has convened more royal commissions than other commonwealth countries. Laws against hate speech are constitutional. Stephen Harper’s disinterest in public discourse, failure to call First Ministers’ Meetings, avoidance of press conferences, and muzzling of scientists contributed to the Conservatives’ defeat in 2015.

This culture of comity, what outsiders experience as Canadian niceness, is worth stewarding and practicing. In a world where words are increasingly deployed as weapons rather than the working tools of social relations, Canadians should affirm their legacy of using words as the building blocks of progress. Although that legacy includes serious errors of commission that need rectifying, as the Truth and Reconciliation Commission made clear, there have also been noteworthy successes. Stewarding and refining a culture of comity is still the best path to social stability, human dignity, and peace.

Elizabeth Mancke, a Canada Research Chair at the University of New Brunswick, is part of a SSHRC-funded team examining “Unrest, Violence, and the Search for Social Order in British North America and Canada, 1749-1876.” She thanks the team for stimulating discussions that helped inform this essay. This essay has also been posted on the Early Canadian History blog, Borealia.

7 thoughts on “Stewarding a Canadian Culture of Comity”