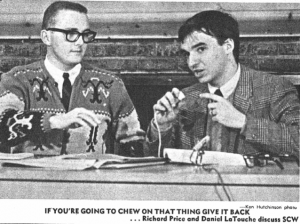 The Front Page of The Gateway, 10 March 1967. Richard Price (U of A Students’ Union President) and Daniel LaTouche (spokesperson for Union Genérale des Etudiants du Québec) are pictured.

“Second Century Week” (SCW) took place fifty years ago, from March 6 – 11, 1967 at the University of Alberta.[1] It was Canada’s third largest centennial event, ranked only below Expo ’67 and the Pan-American Games. Involving students from more than 50 universities, colleges and technical schools, it was “the most ambitious inter-university program ever undertaken in Canada,” designed to bring together students from across Canada, the future leaders of the nation, and to establish a dialogue, particularly among French and English speaking students. In the fall of 1966 organizer and University of Alberta law student David Estrin said that the event was to be the “largest and most representative gathering of Canadian University students ever.” [2] Another goal was to showcase the “activities, thoughts, aspirations and potential of her youth.” Canada’s leading artists and intellectuals would share their work and discuss the future of the country with students. SCW also included a “mammoth sporting event” with more than 700 student athletes. SCW was to unite “town and gown” and appeal to the general public.

Estrin had big plans and dreams for the event. There was to be art, poetry, photography, music, films and plays from across Canada by established artists and students. But the main goal according to Estrin was to “discuss issues which divide the nation.” A SCW Seminar was planned as a bilingual exploration into the future of the country. Estrin was well known on campus for his efforts to promote understanding between French and English Canada and for his support for bilingualism and biculturalism. In 1964 he had the distinction of having the “only French typewriter,” at the university. He took an extra year of Arts to study French as he was convinced that knowledge of French would soon be a “basic requisite for every conscientious Canadian.”[3] In 1965 he was the “dynamic force” behind French Canada Week at the U of A where the theme was “Understanding Through Communication.”[4] Guests had included Montreal historian Michel Brunet, journalist Solange Chaput-Rolland. and Pierre Laporte, minister of cultural affairs in the Quebec government. Organizers of French Canada Week were congratulated in The Montreal Star for fostering communication and understanding at a time when “it is fair to say that these two solitudes are now dissolving at breakneck speed.”[5]

The focus of SCW was also to be on fostering understanding between French and English, although Estrin said that many issues would be addressed: “We’ll talk about problems in Canada that we will have to solve in Canada as adults – things like the problems of Indians and poverty.” [6] While the event succeeded on some levels, there was unfortunately, little dialogue among French and English-speaking students, and what there was, was divisive, rancorous and acerbic. SCW never became a bilingual exploration into the future of the country. As one student journalist concluded, delegates left “with a pessimistic attitude towards any hope of Canada’s two founding races working jointly in building this nation in the second century.”[7] Yet at the same time, delegates were alerted to the “frightening separation” looming between French and English in Canada. [8]

Planning began in 1965 when the Canadian Union of Students (CUS) endorsed in principle a project that would “rally all sections of post-secondary students … for Canadian youth must view the Centennial as a bridge to the future, and squarely face the problems which have not been solved.”[9] But CUS no longer represented Quebec students who in 1964 withdrew and formed their own organization, the Union Genérale des Etudiants du Québec (UGEQ). The federal Centennial Commission was supportive of a student event and one centred in the West as a complement to the Quebec Winter Games. Funds raised from the Alberta Social Credit government of $80,000 were matched by the Centennial Commission. But it was going to cost much more than that. The estimated budget was $250,000.00, with most of the funds required to fly students in from all regions of Canada.

In the spring of 1966 the bilingual aspirations and focus of SCW encountered a major obstruction when the UGEQ announced they would participate only if they could have 225 delegates, rather than their allotted 31. They wanted “two nation” status or equal representation. UGEQ spokesman Daniel LaTouche explained that they wanted the same number of delegates as the total number from the rest of Canada.[10] He said that French Canadians were “not against confederation, just against celebrating it.” [11] He protested that the program had been drawn up without any consultation with them. Estrin was sharp in his retort, saying “they had better stop being hypocrites… they say on one hand they want nothing to do with any centennial project, and then cry that the program has been made up without them being consulted.”[12] Estrin met with the UGEQ in June 1966 and told them they could have as many delegates as they liked but would have to pay for all but 31. The government of Quebec refused to contribute to the project as a result of the UGEQ boycott.[13] Alberta organizers continued in the quest for Quebec participants by appealing to student councils of Quebec universities and colleges, and this resulted in a few delegates from that province.

Plans proceeded despite the UGEQ boycott. A SCW bilingual seminar, to run for each of the five days, was organized by student Dennis Thomas and was designed to “try to assess Canada’s progress in her second century of existence.” But it ended up with no French-Canadian speakers. Six prominent French-Canadians had been invited and all declined. These had included Pierre Elliot Trudeau, then minister of justice and attorney-general in the Lester B. Pearson government. [14] Dennis Thomas explained that a “conscious effort” had been made to include Quebec students and other speakers as “a bilingual Canada was the whole basic underlying theme.” (Some speakers cancelled to attend the state funeral of Governor General Georges Vanier on March 8, 1967.) A similar focus on English-Canadian participants was evident in the literary seminar organized by Jon Whyte, with Al Purdy, Earle Birney, Jack Ludwig, James Reaney, and F.R. Scott, but also included novelist Naim Kattan of Le Devoir (born in Bagdad ).[15]

Altogether there was not a lot of diversity. No women were featured speakers. Yet there seems to have been no complaints about this in the press coverage. (The women’s movement emerged on the U of A campus in 1969, although there were feminists who were active earlier in that decade such as Myrna Kostash).[16] The only advertised female participant at SCW was Miss Canadian University, Linda Inkpen of Memorial University. Female organizers were also few. A SCW “hostess,” set up a “dating bureau” so that delegates could find dates for the dance on the final night.[17] Harold Cardinal, who spoke at a session on student activism, was the only Indigenous invited speaker. Representing the Canadian Indian Youth Council, Cardinal said that his people had little to celebrate that centennial year, and that they were “tired and fed up with paternal futility.”[18] Indigenous issues and culture however, had been the focus of a January 1966 week of panels and discussions at the U of A called “Nayheewuk” when “thirty Alberta natives” were guests on the campus.[19]

SCW began with a “barrage of complaints about its unilingual slant.” [20] Three Ontario student delegates led a “fight for discussion of English-French relations …” that they “termed the most important issue in Canada today.” [21] An emergency meeting of the SCW organizing committee and delegates “erupted into a heated discussion.“[22] According to an editorial in the University of Alberta’s student newspaper The Gateway, the SCW committee “did some hasty restructuring and arranged to have a UGEQ official flown in to sit on a pinch hit English–French seminar.” [23] Flown in was Daniel LaTouche, former vice-president of the UGEQ and at that time a graduate student at the University of British Columbia. LaTouche gave a speech explaining the boycott, emphasizing Quebec students wanted to participate, but as equal partners.[24] He said that organizers of SCW refused to accept the “two nation” concept and that the event was a “scandal and an insult to French speaking students.”[25] LaTouche stated that “divorce would be better for French and English Canadians than embattled marriage.” In the March 16 Gateway, LaTouche published a stinging critique of Estrin and SCW.

Despite the criticisms and absences, SCW was quite a “bash,” serving up an array of distinguished speakers and other events, although the attendance of University of Alberta students was low. It was “test week” and most students were unable to attend as they had exams to write. (David Estrin said that “someone is to blame in the administration building for the fact test week wasn’t postponed.” )[26] The turnout from the public was also disappointing. The most popular event each day was the SCW coffeehouse. Entertainers at SCW included folksinger Gordon Lightfoot and comedian Rich Little. The literary seminar at St. Stephen’s College was “always packed.” Earle Birney, considered at the time the “dean of Canadian poets,” got press attention for his support for smoking marijuana.[27] The film festival, art and photography exhibits were popular. The athletic events attracted “moderate” attendance. (All went smoothly with the athletics until three members of the Ontario swim team were arrested and given suspended sentences for ripping down centennial flags on Jasper Avenue. They said they were participating in a scavenger hunt.)[28]

When it was all over the organizers claimed it was a success, but there were lots of detractors. Critics included Tom Faulkner, the president of the University of Toronto student’s council. He wrote that SCW was staged by “English-speaking students” who “almost totally alienated French-speaking students by [their] disregard for the need for serious study of social problems and the encroachment of the U.S.”[29] Other criticisms included that there was little or no discussion of “serious problems [such] as poverty and the Maritimes, the Canadian Indians and the Eskimo.”[30] Yet this same student delegate from Waterloo, Barb Lindsey, wrote that “the problems that Canadians will be facing in the next one hundred years were brought to the fore and the frightening separation between French and English in Canada was widely impressed on the delegates.” Franco-Albertan journalist Jeannine Côté wished students from Quebec had participated with more of an “open mind” rather than focusing all their attention on their own province. She was concerned about the fate of francophone minorities outside of Quebec. She concluded that after SCW it was difficult to not adopt a pessimistic attitude toward the future of Canada.[31]

There was little consensus on the success or failure of SCW. University of Alberta student journalist Bob Jacobsen summed it up best when he wrote in The Gateway “Second Century week passed away quietly on Sunday. The deceased, variously described as extremely successful by some of the most ardent supporters, and a disaster by others, escaped the attention of most U of A students.” [32] SCW is erased from histories of Centennial year events, and from histories of the University of Alberta, but we should remember this ambitious initiative. It is a shame that this opportunity for communication and exchange fizzled at a time when our nation was in great need of dialogue.

[1] Events were held at both the Edmonton campus and the University of Alberta at Calgary campus, and there were also SCW events in Banff.