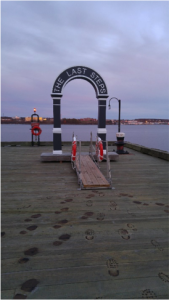 This summer, on August 26, 2016, a new First World War memorial was unveiled in Halifax, Nova Scotia. Titled The Last Steps, the memorial takes the shape of an arch and stands on the city’s harbour front; a gangplank purposefully leads the observer’s eye up the pier, through the arch, and right out to sea. Footprints (cast from an authentic soldier’s boot) burnt into the wooden pier conjure up impressions of souls from long ago. In this, Nancy Keating, the Nova Scotia artist who designed the memorial, succeeds in imparting on the observer the haunting emotion the memorial is intended to convey. The memorial stands as a testament to the last steps soldiers took in Halifax before departing for the Great War.[1]

The Last Steps memorial is just one of thousands of local and national memorials and acts of remembrance happening around the world between 2014 and 2018 to mark the centenary of the First World War. Making a new addition to the Halifax boardwalk, the memorial provides an opportunity to ponder the creation of sites of memory and twenty-first century centenary commemoration of the First World War, as it happens. This is an opportunity to observe how centenary commemorations take place; not only their modes and the messages contained within them, but the spaces, both physical and virtual, where they are placed.