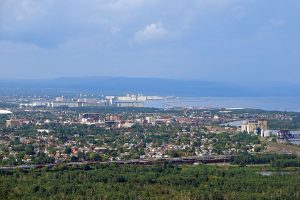 Thunder Bay, Ontario is a city well-known for a particularly explicit form of anti-Indigenous racism.[1] Unlike more southern and urban locales where anti-Indigeneity is predominantly expressed as erasure, the social structures of feeling that exist in Thunder Bay are informed by a close proximity to Fort William First Nation (FWFN) – a community located adjacently to the city. Recently, the news that FWFN has reached a $99 million land claim settlement with the federal government has stirred up racial tensions in Thunder Bay and across Canada more broadly. Predictably, complaints about ‘handouts’ and other well-worn racist tropes have frequented news media comment sections, social media debates, and the everyday conversations that make up public life in the city of Thunder Bay. In this article, I wanted to offer a brief review of the land claim settlement that situates it within its proper historical context of settler colonial dispossession. In writing this history, I am relying quite heavily on the work and research of FWFN Lands Director Ian Bannon and Chief Peter Collins. To supplement these materials (which FWFN has made widely available online) I use the scholarship of historians who have attempted to unpack the settler colonial constitution of Thunder Bay in the late nineteenth and early twentieth centuries.[2]

In 1905, the Fort William band was forcefully uprooted and relocated from their reserve site on the shores of the Kaministiquia River so that settlers could build a grain terminus for the Grand Trunk Pacific railway.